Various top-tier banking institutions in the United States are looking to take Bitcoin as collateral for loans. Goldman Sachs and other Wall Street banks may not dabble in spot cryptocurrency markets but could consider synthetic crypto products including futures.

Goldman Sachs and other top-tier banking institutions in the US are exploring the idea of taking the world’s largest cryptocurrency by market capitalization for loans. According to a new report by CoinDesk, these banks are seeking to do institutional cash loans with Bitcoin as collateral.

However, most banking institutions are not considering the custody of spot Bitcoin to make the loans but will consider other crypto-related products such as futures.

The Wall Street banks are looking to emulate three party repo-type arrangements, which is a way of borrowing funds by selling securities with an agreement to repurchase them using a third-party agent.

According to various sources, it is an opportunity that lays the foundation for more integrated digital asset prime brokerage services in the future. A source further stated that Goldman Sachs is working on getting lending against collateral and the tri-party repo approved.

Another source stated that some banks may use a third party to create the loan, and others may choose to use their own balance sheet. The source added that half a dozen of large banks have been discussing Bitcoin-backed loans, and some of them are “in the next three to six months category”.

Coinbase and Fidelity Digital Assets were listed as the potential custodians the banks were in discussions with. The Office of the Comptroller of the Currency (OCC) allowed US banks and savings associations to custody cryptocurrency for their clients since last year. The Federal Deposit Insurance Corporation (FDIC) chairman further stated that US regulators are looking into ways for traditional banks to hold Bitcoin.

Bitcoin price has suffered weakness as it resorts to the lower boundary of the ascending parallel channel near $56,401. Although this area appears to act as reliable support for BTC, the leading cryptocurrency must reclaim $58,045 to secure an uptrend.

The prevailing chart pattern suggests a bullish outlook for Bitcoin price, with an optimistic target at $87,912. However, BTC must kickstart a recovery as the bears have taken over momentarily.

To escape the vulnerability of slipping into a downtrend, the bellwether cryptocurrency must aim to tag the next area of resistance at the 61.8% Fibonacci retracement level at $58,045, coinciding with the 21-day Simple Moving Average (SMA). 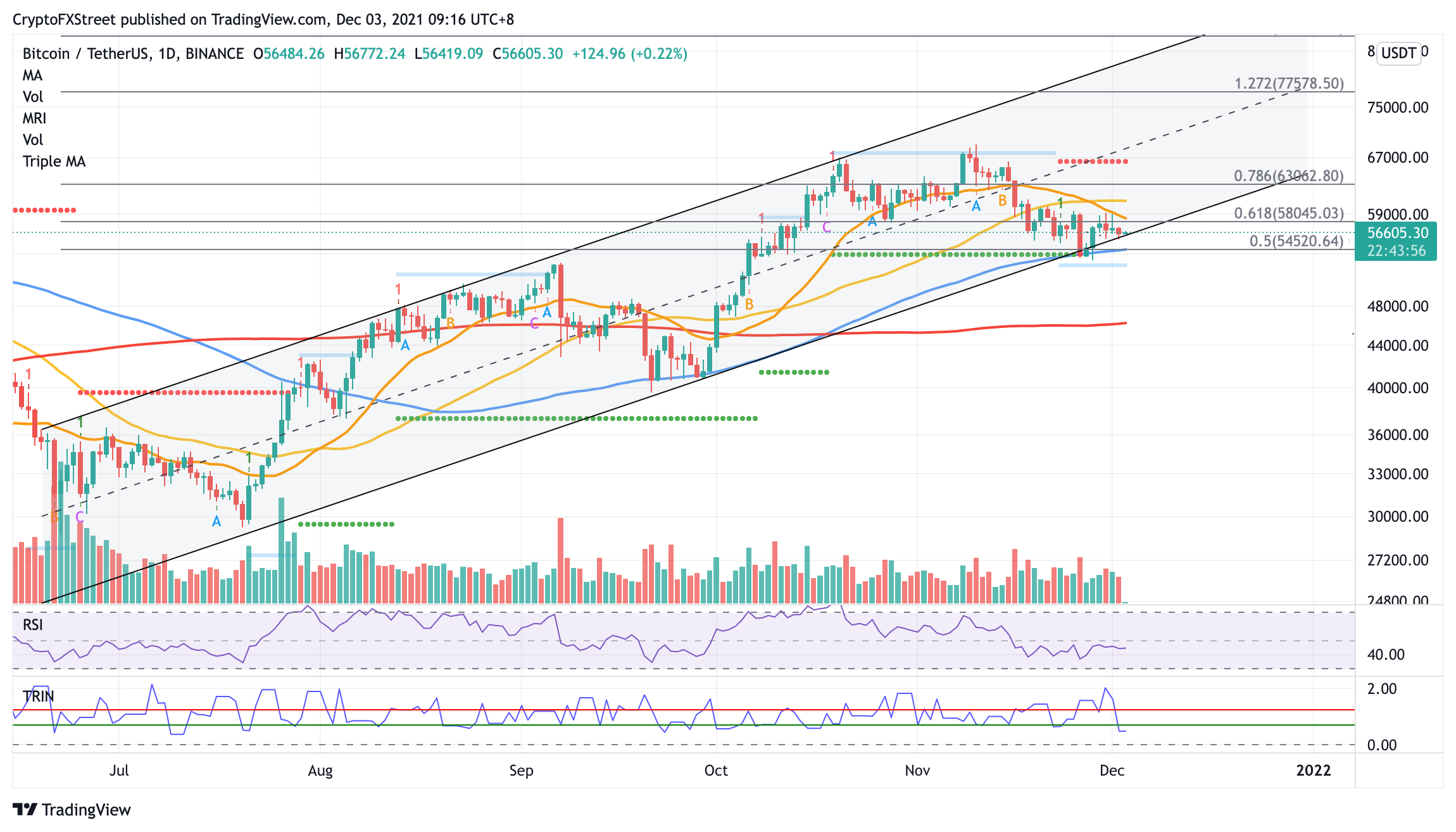 The first line of defense for Bitcoin price is at the lower boundary of the governing technical pattern at $56,401. If BTC fails to hold above this crucial area of support, it may fall further to find the 50% retracement level at $54,520, corresponding to the 100-day SMA.

Disclaimer: FXStreet has reached out to Goldman Sachs to get an official statement about the recent developments, but the bank has yet to respond.