Ethereum price seems to have hit a local top for its recent slow but steady uptrend. A minor retracement into a demand zone is likely and necessary for the upswing that the bulls have been waiting for.

Kraken CEO Jesse Powel participated in the bid and acquired the Snoopermatic NFT.

Twitter followed Reddit’s lead and created eight NFTs for sale via ‘The 140 Collection’ on Rarible.

These developments suggest that despite the slump in the general cryptocurrency market, the adoption of Ethereum-based applications is unaffected. Unlike Bitcoin, which can only be used as a store of value or speculative currency, the ETH blockchain accrues fundamental value and continues to improve.

While the adoption of Ethereum continues to grow, the hash rate and the miner revenue plummet as ripples of China’s digital currency mining clampdown propagate.

ETH hash rate dropped from 643 terra hash per second (TH/s) on May 20 to 499TH/s on July 4, representing a 22% decline. On a similar note, the Ethereum miner revenue shrunk by 53% between May and June.

Ethereum Improvement Proposal (EIP)-1559, which is said to take effect in the London hardfork in late July, will change the nature of how fees are collected via transactions. Additionally, this EIP will be user-focused and might negatively affect miners while vastly improving the scalability of ETH.

Therefore, the recent 53% drawdown is another gut-punch to Ether miners, who are migrating to regulatory-friendly countries after the recent mining ban in China.

While EIP-1559 will help ETH with scaling and reducing gas fees, Ernst and Young’s Nightfall 3 is another significant milestone in this regard.

According to a recent announcement, Nightfall 3, a Layer 2 protocol, was open-sourced on July 1. The latest release, albeit experimental, will complete Zero-Knowledge Proof (ZKP) transactions for roughly 10 kGas compared to 700 kGas for the original Nightfall application, with a potential reduction of up to 8 kGas via pending updates.

Ethereum price is still in the range like most altcoins and the flagship cryptocurrency. However, the recent run-up between June 23 to date has set up three higher highs and two higher lows. When these swing points are connected using trend lines, a rising wedge pattern forms.

This setup forecasts a 16% downswing to $1,909, determined by measuring the distance between the first swing high and low and adding it to the breakout point at $2,271. Therefore, a decisive close below the lower trend line coinciding with the support level at $2,271 will indicate a breakout.

While the technical formation predicts a 16% crash, the demand zone ranging from $2,041 to $2,106 could absorb the selling pressure and halt it.

If this were to happen, it would indicate the presence of buyers and propel Ethereum price upward by 10% to retest the midpoint of the range at $2,320. A decisive close above this level opens up the path to $2,912.

If the bid orders continue to pile up after tagging $3,000, ETH might likely retest the resistance level at $3,240. 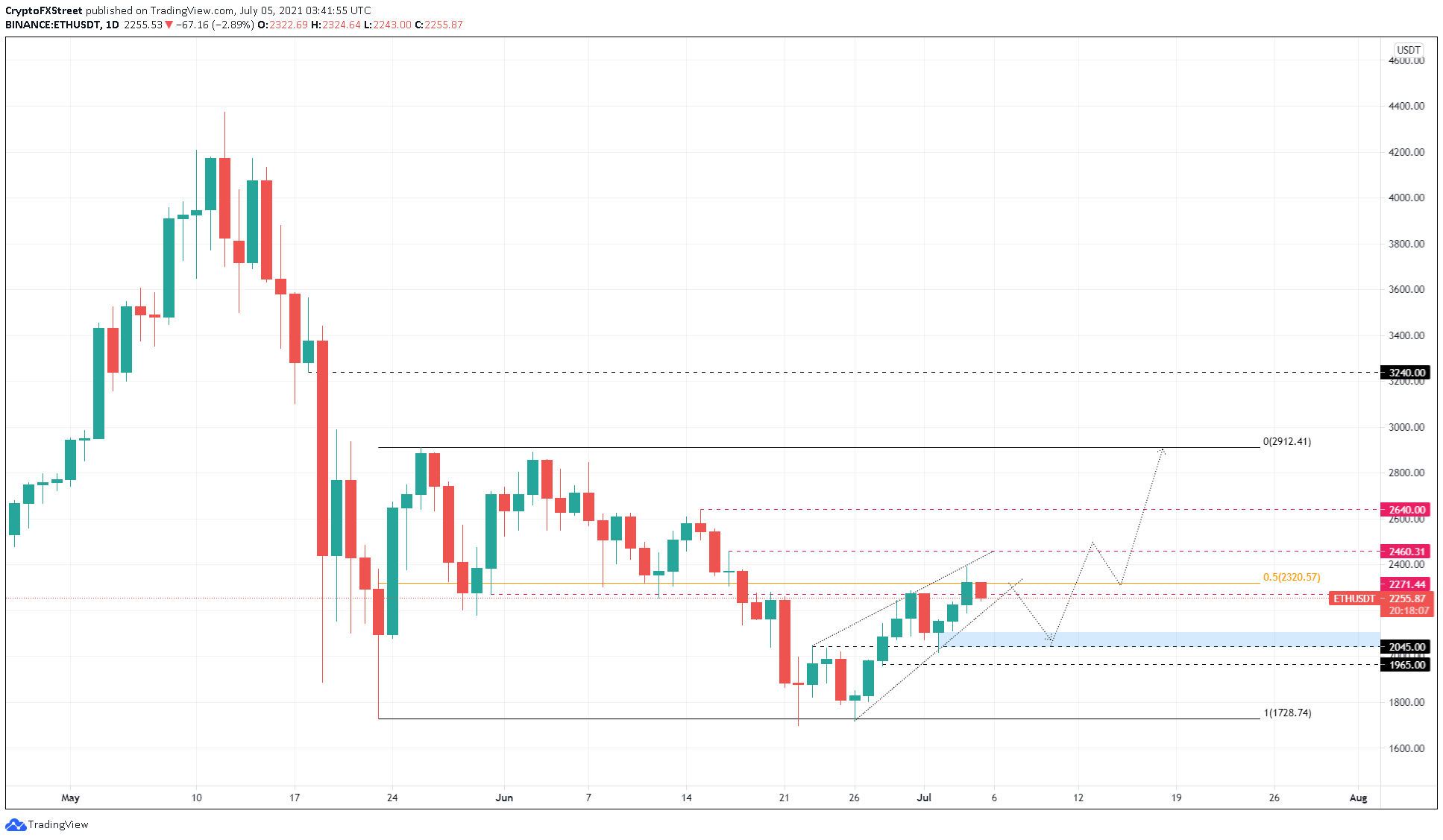 Supporting the short-term price drop from the rising wedge pattern is the 365-day Market Value to Realized Value (MVRV) model, hovering around 26.2%.

This fundamental index measures the profit/loss of investors who purchased ETH over the past year. The current value represents that 26.2% of the market participants that bought Ether are still in profit.

The supply on exchanges confirms that Ethereum price remains bullish from a long-term perspective. Over the past three months, this metric has dropped from 22.2 million to 20.8 million ETH.

This 6% plummet indicates that investors are moving their holdings from exchange to cold wallets as they are confident in Ethereum price performance over the upcoming months.

The total number of these investors in this category went from 8 to 9 between May 19 and June 17, which is a bullish confirmation of their investment thesis.

A potential spike in selling pressure that pushes ETH to produce a decisive daily candlestick close below the range low at $1,728 will invalidate the bullish thesis and open the path for further down moves.