Chainlink price broke out of its symmetrical triangle consolidation on October 1 and rose explosively. However, the momentum reduced around a crucial resistance barrier, leading to a pullback. LINK might need to bounce off a stable support floor to kick-start a new uptrend.

XYO Network revealed the integration of Chainlink’s Variable Random Function (VRF) in a recent announcement. The project will use the VRF and random number generator to provide a location-based giveaway smart contract to select random winners fairly and securely.

The XYO Network will use COIN, the project’s frontend, for these "giveaways by allowing its users to participate based on visits to selected special locations."

To choose the recipient fairly from this list of entrants, the XYO Network needed a verifiably tamper-proof source of randomness. After reviewing various mechanisms, we selected Chainlink VRF, the blockchain industry’s most time-tested and widely adopted solution for secure and verifiable RNG.

Additionally, Frenchie Network has also integrated Chainlink VRF for giveaways and airdrops. To prove a fair distribution, zero corruption from the developer team, the project will leverage VRFs as part of their tokenomics.

LINK price prepares for the next leg-up

Chainlink price formed a symmetrical triangle pattern from September 21 to October 1. However, the sudden surge in buying pressure on October 1 pushed LINK to slice through the triangle’s upper trend line at $24.41 and rallied 15%.

However, the bulls lacked momentum, leading to a retracement. So far, the oracle token has dropped 6% from its local top at $28.16. Investors can expect the Chainlink price to continue its descent to the stable support floor at $24.90 or the 50% Fibonacci retracement level.

If the buyers decide to come back, Chainlink’s price will bounce off this barrier and start a new 24% uptrend to $30.79. However, to reach its target, LINK needs to shatter $28.39.

In some cases, Chainlink price might extend to the range high at $36.33, constituting a 46% ascent from the trading range’s midpoint. 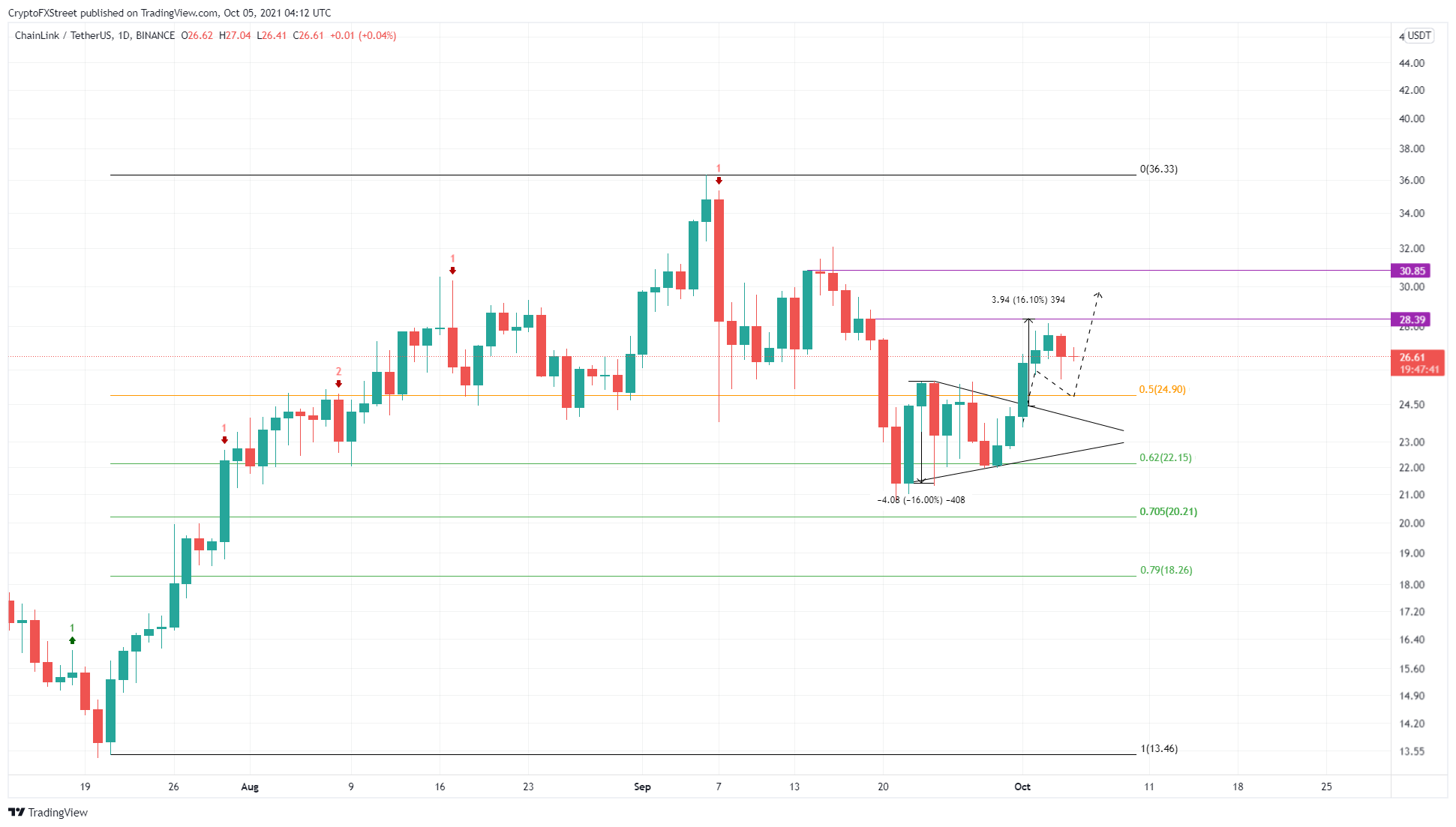 On the other hand, if Chainlink price fails to hold above $24.90, it will invalidate the bullish thesis. Additionally, it will also indicate that the seller activity has increased. Regardless, such a development could knock Chainlink price down to retest the 62% Fibonacci retracement level at $22.15.