Cardano price has been teetering above a crucial support barrier for over a month and shows signs of coiling up. This congestion could resolve into a massive bullish breakout, pushing ADA to new all-time highs.

Here are two reasons for the optimism around Cardano and why it could hit $8 over the coming weeks.

The much-awaited Alonzo upgrade was successfully implemented on September 12 via a hard fork. This improvement brings smart contracts and a plethora of possibilities to it, all of which were highly anticipated.

While Cardano is sometimes referred to as the so-called “Ethereum killer,” it never possessed any capabilities that allowed it to play on the same field. However, developers can now start building dApps, decentralized exchanges (DEX) and algorithmic stablecoins, which could evolve into a DeFi ecosystem similar to Ethereum.

This development is possible because of the Alonzo upgrade, which has firmly implemented the core building blocks. Moreover, thousands of developers are already taking part in the Plutus Pioneer course, which will allow them to build a new ecosystem on Cardano.

An example of this is ADALend, a lending platform built on the ADA blockchain that will facilitate the “new wave of flexible financial markets by serving as a foundational layer for instant loan approval, automated collateral trustless custody and liquidity.”

While this is just the beginning, the burgeoning ecosystem will attract more users to the Cardano blockchain, improving its prospects and bringing in tons of capital.

Regardless of the technical setups, if the fundamentals of an asset are strong, the price will find a way to cut through the noise and surge higher. ADA, however, displays an accumulation fractal that could propel it to new all-time highs with its recent upgrade acting as a tailwind.

Cardano price has entered another consolidation phase since mid-August that looks similar to the one mentioned above. If a similar structure continues to unfold and ADA breaks out from the congestion, it will trigger an exponential rally.

However, the confirmation of this run-up will arrive after Cardano price produces a decisive close above its all-time high at $3.10. 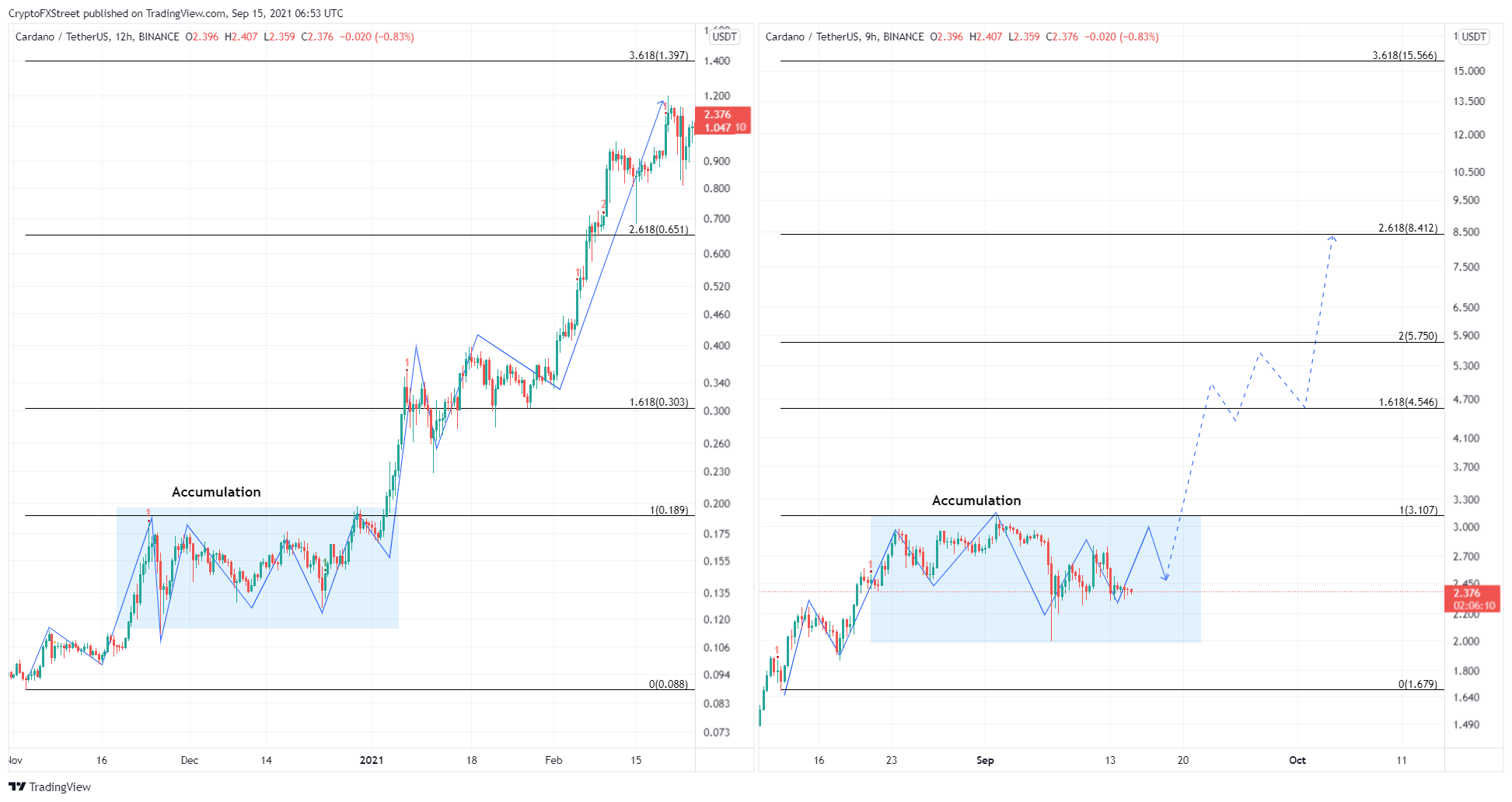 While optimism around Cardano price seems logical after the recent Alonzo upgrade, things could turn awry quickly if the big crypto decides to tank. If Bitcoin price begins to crash violently as it did on September 7 or May 19, it would push all the altcoins to do the same.

If ADA slices below the range low at $1.68, it would set up a lower low and invalidate the bullish thesis. While recovery from this downturn is plausible, a massive shake-out would scare the investors away and delay the upswing.