Bitwise has partnered with ETF Series Solutions to launch a Bitcoin exchange-traded fund in the United States. The new crypto ETF was filed with the United States Securities & Exchange Commission to invest in BTC futures and other financial products.

Bitwise Index Services, a division of the investment management firm, filed for the Bitwise Bitcoin Strategy ETF to invest in BTC futures and other financial products on September 14.

The filing mentioned that the fund would not directly invest in Bitcoin. Investors would be able to gain exposure to the leading cryptocurrency through indirect investments in standardized, cash-settled BTC futures contracts traded on commodity exchanges that are approved by the Commodity Futures Trading Commission (CFTC).

The fund may also invest in pooled investment vehicles, including Canadian cryptocurrency ETFs that provide exposure to the bellwether digital asset. In addition, the ETF may also invest in cash, US government securities or money market funds.

So far, the securities regulator has not approved any Bitcoin ETF in the United States. SEC chair Gary Gensler has expressed that the regulator is more likely to approve a Bitcoin futures ETF rather than a spot ETF, citing risks associated with the market.

Fidelity Investments, which has previously filed for a Bitcoin ETF with the SEC as well, recently prodded the agency to approve its fund. The financial services firm cited increased investor interest in cryptocurrency, as there has been a rising number of investors holding the bellwether digital asset and similar funds globally.

Bitcoin price has been consolidating after the September 7 flash crash. However, BTC has been able to slice above multiple resistance barriers that could incentivize buyers to push prices higher.

For the bulls to sustain momentum, BTC would need to hold above the 61.8% Fibonacci retracement level at $46,919. 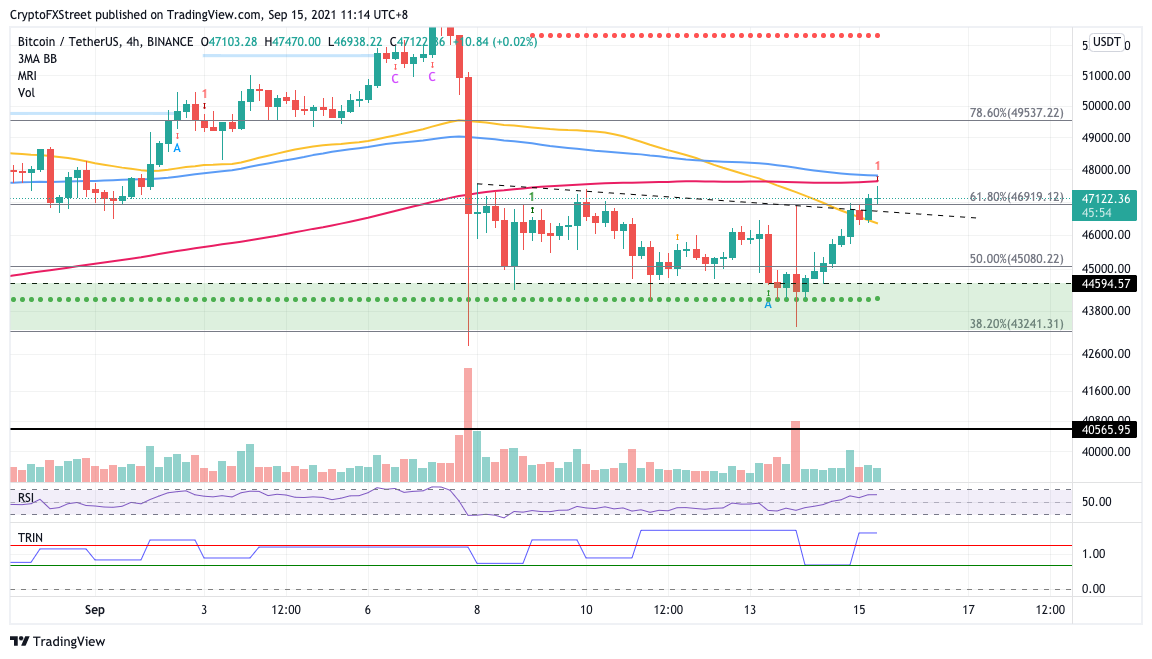 Investors should be aware of the Momentum Reversal Indicator's (MRI) top signal, suggesting that BTC could see a reversal. Substantial support will emerge at the demand zone, which extends from $43,241 to $44,594.