The Securities & Exchange Commission has decided to extend its review of the VanEck Bitcoin exchange-traded fund (ETF) proposal. The regulator stated that it would be making a decision whether to approve or reject the ETF on November 14.

VanEck first filed the Bitcoin ETF application in December last year. Since then, the securities regulator has delayed and extended its review period without giving an answer.

The agency stated that it would be extending the time period to approve or disapprove the proposed rule change for an additional 60 days.

Currently, no Bitcoin ETFs have been approved in the United States due to a concern in price manipulation by the SEC. Cryptocurrency ETFs have been gaining traction around the world as they enable investors to delve into digital assets without holding the underlying asset.

While the New York-based asset manager continues to wait for approval, a dozen other companies are also awaiting an answer from the financial watchdog on their crypto ETFs. These firms include One River Asset Management, Ark Invest and SkyBridge Capital.

Since the SEC can only extend its consideration period for prospective ETFs three times, November 14 will mark the final decision on whether VanEck’s Bitcoin ETF will see the light of day.

Many Bitcoin ETFs filed with the securities regulator have been based on the BTC spot market. However, SEC Chair Gary Gensler previously remarked that he would be more open to approving a crypto ETF that does not offer direct exposure to the new asset class. He further stated that funds with exposure to futures may be preferred.

Bitcoin price to resume uptrend but bulls need to commit

Bitcoin price appears to be recovering from the massive crash on September 7. The leading cryptocurrency is treading above a major support level but is finding difficulty overcoming its next hurdle.

Should Bitcoin price eventually manage to slice above these hurdles, the final major obstacle for BTC is at the diagonal trend line, which has flipped from support to become resistance for the bellwether cryptocurrency at $50,081. Only a claim above this level would see the leading digital asset post a major recovery and resume its rally. 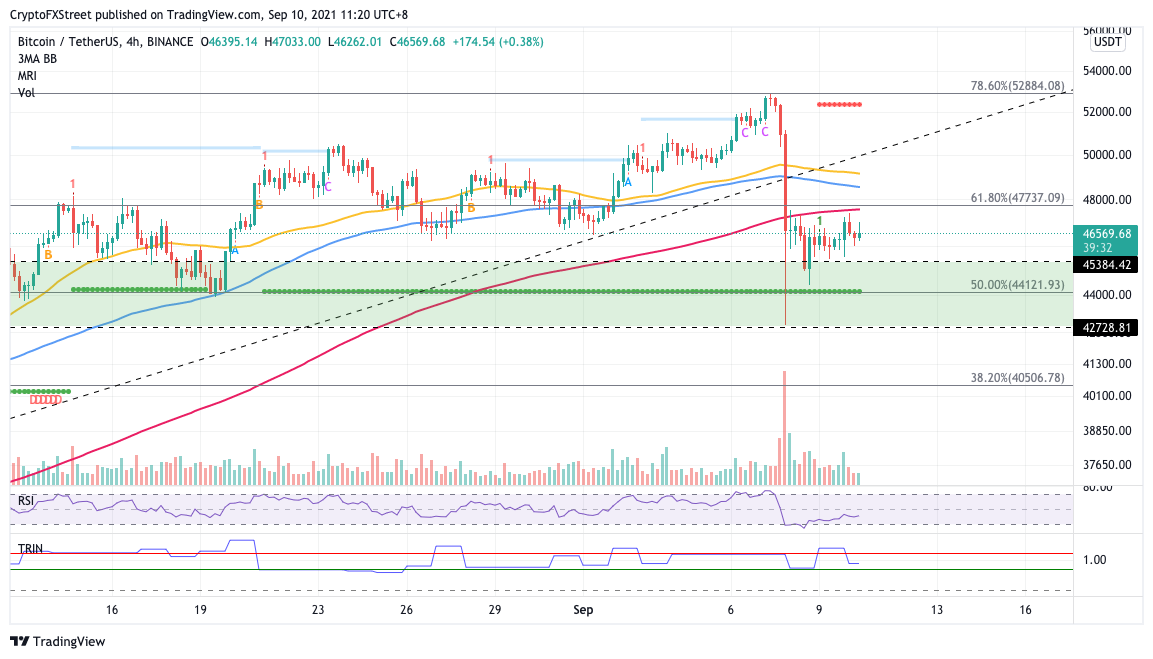 If the 61.8% Fibonacci retracement level proves to be too strong for the bulls, Bitcoin price may continue to move sideways. BTC may discover immediate support at the start of the demand zone at $45,384, extending to $42,728.

The Momentum Reversal Indicator (MRI) support line further highlights that the 50% Fibonacci retracement level, which sits within the demand zone at $44,121, acts as significant support for BTC.