Bitcoin failed to make a meaningful break above $50,000 on Tuesday. However, on-chain metrics and selected macro indicators suggest that the flagship cryptocurrency is nowhere near the overbought area. It is worth noting that a spike above $50,000 could quickly get BTC into this region, culminating in a correction before new record highs.

Bitcoin has room to grow before hitting overbought conditions

The pioneer cryptocurrency is dancing slightly above $50,000 after rebounding from near-term support at $48,000. BTC will make a meaningful step above $50,000 in the next few days.

According to the MVRV Z-Score, Bitcoin is getting closer to the overbought territory but is not quite there yet. Note that Glassnode outlines that the MVRV Z-Score pinpoints instances when BTC is "over/undervalued relative to its ‘fair value.’”

The history of the largest cryptocurrency shows that when the market value gets considerably higher than the coin’s realized value, a market top is usually around the corner (red zone). On the other hand, the green area signifies the market bottom. 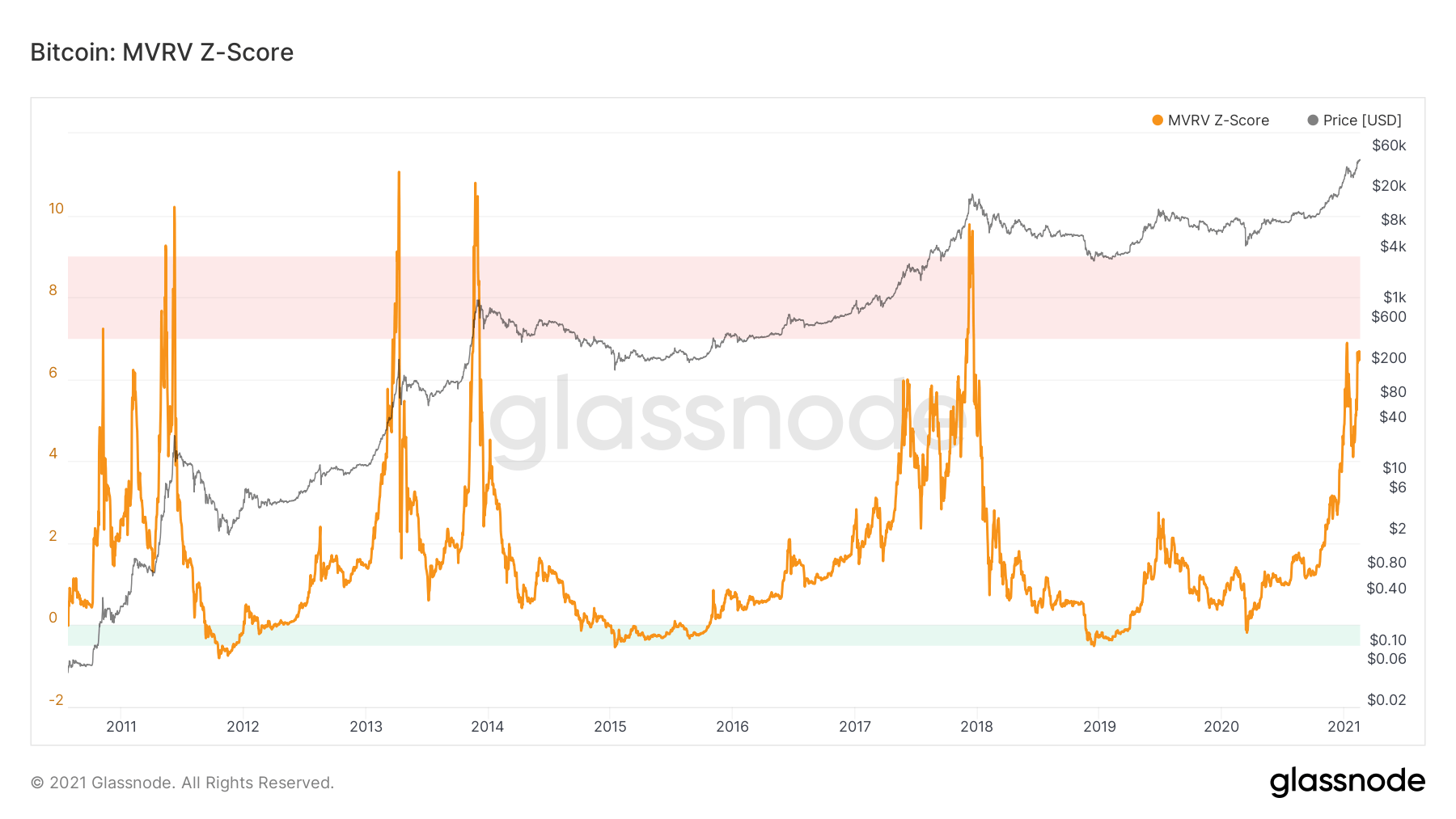 Consequently, a meaningful break into the $50,000's range will quickly take the MVRV Z-Score into the red zone. Moreover, the market value will begin to accelerate more than the realized value.

Bitcoin is poised for another leg up

Selected on-chain metrics add credence to the bullish outlook; for instance, miners in the network have sold virtually no coins over the last 30 days. In other words, sentiments are positive that Bitcoin will hit a higher high before selling pressure kicks in.

Similarly, Bitcoin wallets holding between 1,000 and 10,000 coins have soared significantly over the last three months, insinuating that the risk appetite continues to grow. Santiment’s holder distribution metric shows that these addresses rose by 10.5% in the 90 days from 2,116 to 2,364.

Bitcoin reserves on all exchanges continue to fall at an astronomical rate. CryptoQuant data reveals that investors are withdrawing their funds from exchange platforms with the aim of holding. Consequently, this scenario significantly lowers the market's selling pressure while leaving Bitcoin open-air to explore higher price levels.

Coinbase negative premium must cool off

The Coinbase premium refers to the gap between Bitcoin price on Coinbase and the corresponding price on Binance. A higher premium means that spot buying pressure is higher, pushing BTC to higher levels. The current negative premium on Coinbase is hindering the market from making a significant leg up. However, the king of cryptocurrencies will hit higher highs as soon as it cools off.

The bellwether cryptocurrency has finally pulled above $50,000. If this breakout proves, meaningful a market top will come into the picture before BTC springs to a higher high. Note that several predictions have been made inferring that Bitcoin could soon rally to $100,000.

According to Tyler Durden, a renowned analyst, Bitcoin is still in a buy zone, especially after the quick rebound from the recent lows. Moreover, the break above $50,000 might call out to institutional investors, increasing the influx of funds from fiat to Bitcoin. Durden shares the fractal below on Twitter.

Although multiple on-chain metrics point at Bitcoin making a higher high above $50,000, the MVRV Z-score implies that a market top is likely to come into the picture. Therefore, investors must tread carefully to take full advantage of the expected near-term leg up, at the same time, ready for a potential reversal as the MVRV Z-Score hits the red zone.