Bitcoin Cash appears to have settled for consolidation after the recent rejection from levels above $500. Support has been provided by an ascending parallel channel's lower boundary. Meanwhile, BCH is pivotal at $480, but odds are starting to align in favor of another breakdown toward $400.

The upside resistance is also expected at $500, as highlighted by the 50 Simple Moving Average on the 4-hour chart. If a recovery comes into play, the channel's middle boundary barrier may be tested, but it's unlikely that the selling pressure will be overcome.

On the other hand, if the bulls lose the channel's support provided by the channel's lower boundary, we will likely see losses extending toward $400 (last week's support). The 100 SMA is in line to provide anchorage and perhaps absorb some of the selling pressure. Simultaneously, the Moving Average Convergence Divergence or MACD appears to have validated the bearish outlook.

The confluence tool appears to have added credibility to the sideways trading outlook by presenting two critical levels. A robust resistance $482 as highlighted by the one-day 61.8% Fibonacci level. On the downside, support is envisaged at $479, as shown by the 15-minutes previous high. BCH will likely remain in this range a while longer before a breakout or breakdown comes into play. 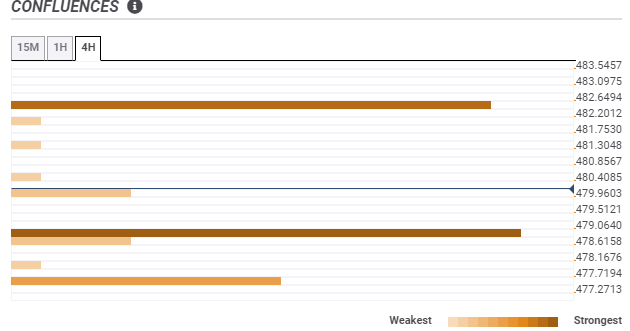 On the upside, closing the day above the 50 SMA on the 4-hour chart may help confirm an uptrend to levels above $500. Such a price action will also call on many investors to join the market in anticipation of a breakout to $600.

The Graph is teetering at $1.73 after its uptrend ran into a barrier around $2.9. Declines have been consistent within the confines of a descending parallel channel. Losing the middle boundary support has left GRT bears with open-air to explore.

Chainlink price nears the end of an ascending broadening wedge pattern that forecasts a 50% drop. Transactional data shows that $17.8 could be an inflection point. If LINK price slices through this support, then a drop to $13 seems likely.

XLM poised for massive 27% breakdown, as the technical picture worsens

Stellar has recently been rejected from the yearly high of $0.61. Bulls tried their best to secure higher support but failed in that task. XLM continues with the breakdown below a descending trendline that seems to have confirmed a triangle pattern on the 4-hour chart.