The market capitalization of the crypto sector descended a bit to $247.033 billion a slightly decreasing traded volume of $43 billion in the last 24 hours, while Bitcoin dominance grew slightly to 67.39% 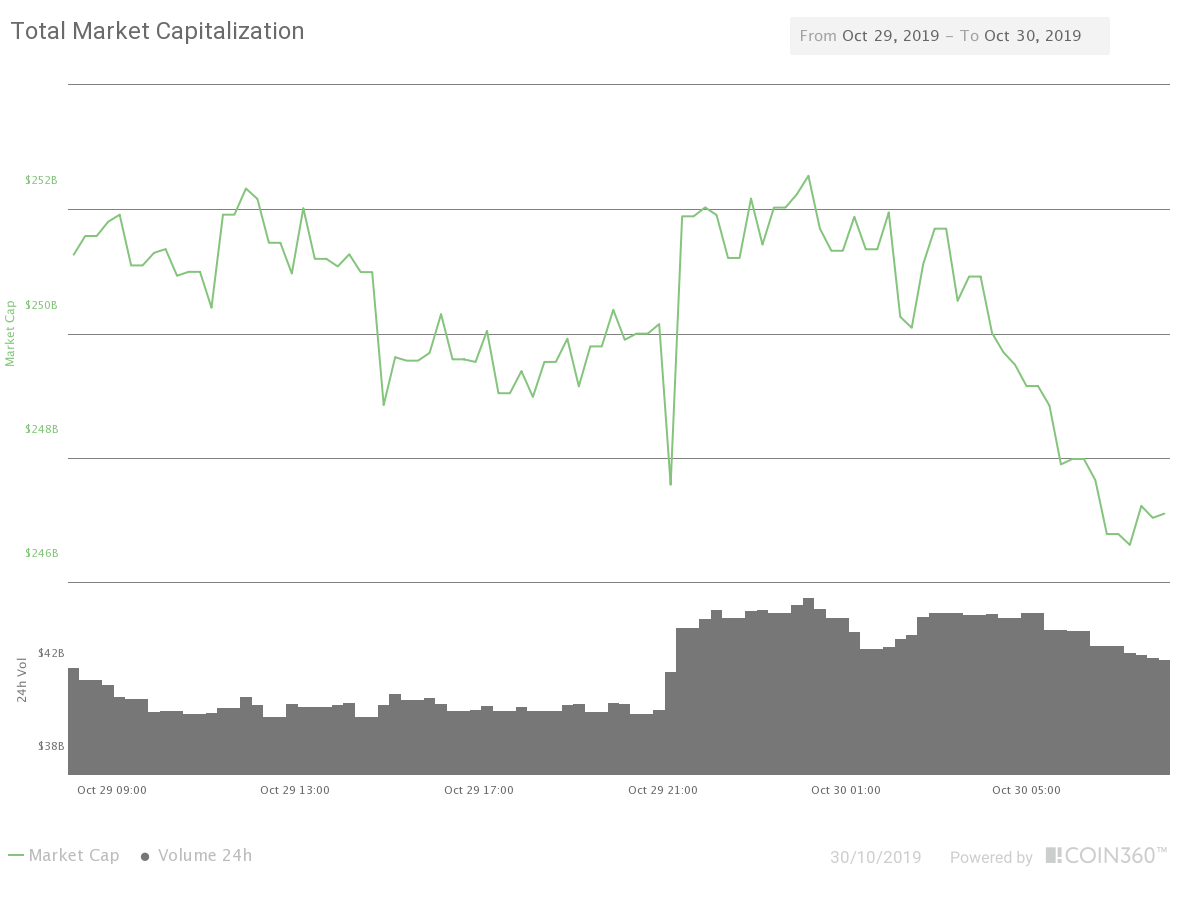 China's intention to integrate blockchain technology into its surveillance program poses gave risk to millions of citizens. The use of a centrally issued currency and the total control of the blockchain and wallets allow the Chinese government total access to the transactions of its citizens. In a recent piece of news, China's Communist Party asks its members to use a dApp to certify their loyalty to the party. Developers of the PCP released a dApp, which could be called "Original intentions Onchain," where its members could sign a contract certifying his political commitment.

TRON API is added to Samsungs Blockchain Keystore after its update to 1.2.0 version released on Oct. 29. That way, TRON can be used in transactions by over 1 billion Samsung users. 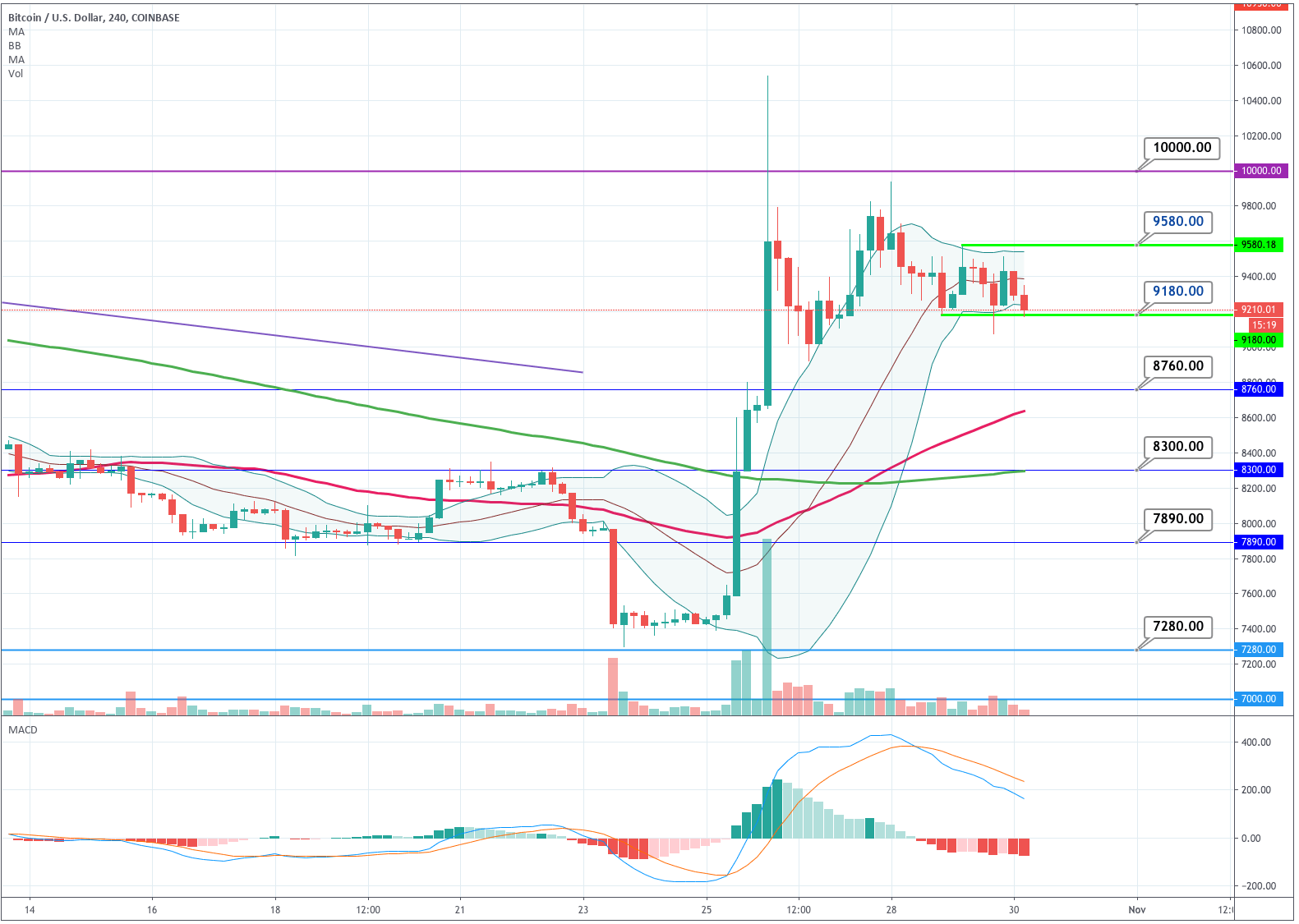 Bitcoin is moving in a sideways range between $9,180 and $9,580 as the Bollinger bands shrink, its MACD evolves in its bearish phase, and volume fades.  This usually is a continuation pattern, but we need to see a breakout of this range, which also will make the Bollinger bands expand. The levels to observe are the same as yesterday's levels. 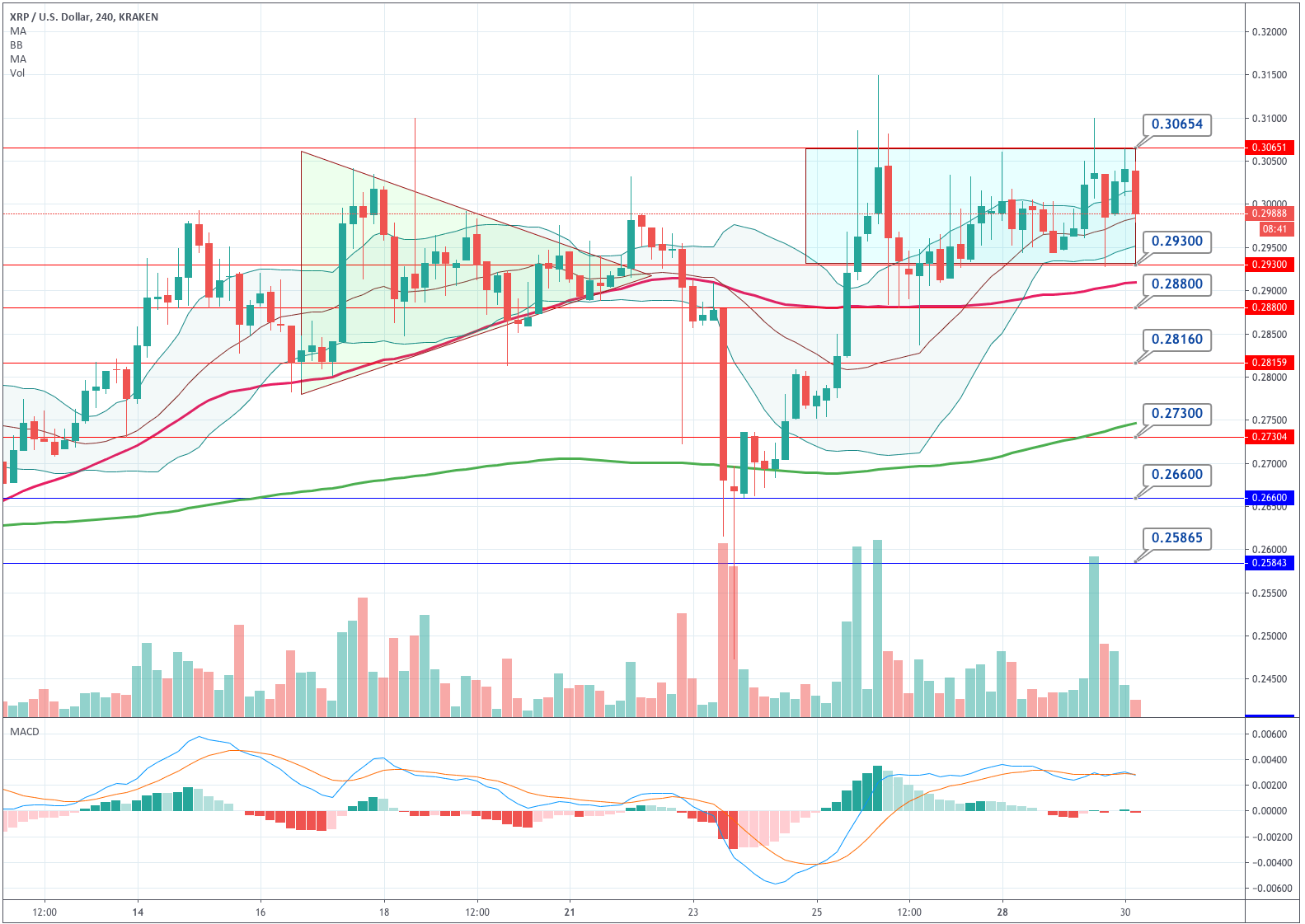 Ripple is following the path we envisioned yesterday. Buyers don't have enough strength to push XRP above the 0.3065 level, and sellers can't move it below a $0.293 close, so it is moving inside this range waiting for a reason to break this equilibrium. The overall bias is bullish since the price is still moving above its 20, 50, and 200-period SMA. 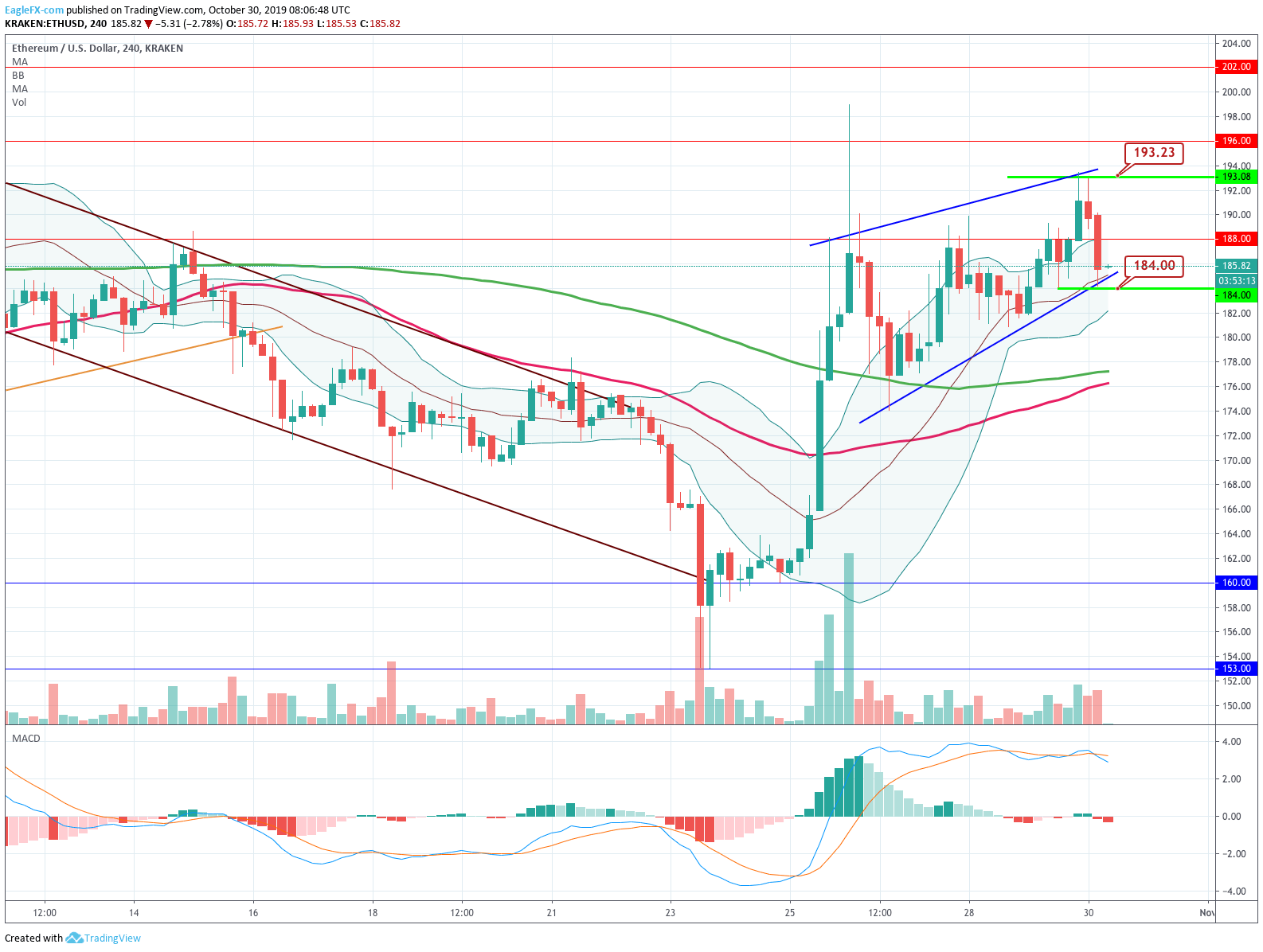 Ethereum is moving slightly more positive than BTC or ETH. The price managed to make a short-term higher high in the last 24 hours and moves in the upper side of its Bollinger bands. On the 4H chart, we can observe ETH is moving in an ascending channel. That is a weak price structure, which is seldom concluded with a downward movement.  The levels to keep are marked in the chart:  a close above $193.23 would attract more buyers while closing below $184 might trigger more sales. 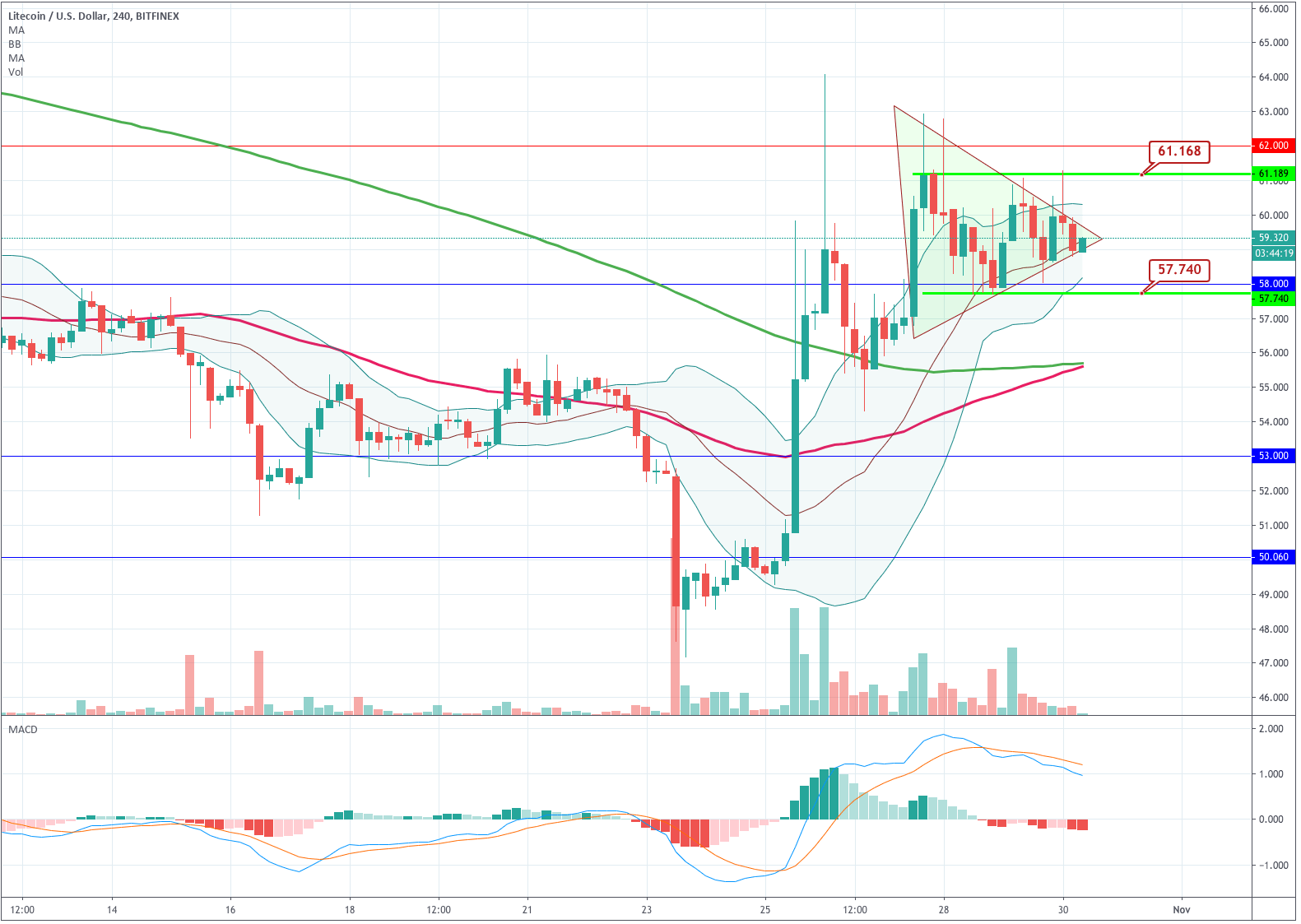 Litecoin is also creating a triangular structure, but, basically, it is ranging with low volume, waiting for others to make a decision. The key levels to observe are marked on the chart, surpassing one of these levels would be a confirmation of the next movement. Technically, the overall outlook is slightly bullish as the price is above +50 and 200-period SMA and is touching its 20-SMA line.