Statistical analysis is a popular tool used by traders around the globe.

It can differ from technical analysis in the sense that raw data is used other than that formed on a chart.

Often both are one and the same but, from time to time, the results and trading systems produce different results.

In this study, we will be looking at the price waves. Most markets move in waves as all different types of traders looks to trade over different time horizons.

Some may be buying short term, some long term, some taking profit and there are traders who could just be arbitraging.

On the daily price charts, this study will be looking at the waves made between 30th May 2019 and the present day (29th November 2019)

What do we classify as a price wave?

A wave is from peak to trough or trough to peak of a move.

In this study we will be measuring moves in USD as percentage changes can be relative depending on where price is at the time.

The measurement must be made from the wave low to high point or vice versa. 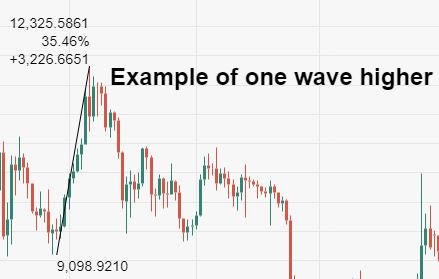 Altogether there were 17 waves over the period measured and the biggest was a whopping $6441.44. The smallest price wave was $1125.

There are many ways to use the data. It could be used for stop loss placement or target profits but either way, the data shows that price waves between $1000 and 2000 are the most common closely followed by waves between $3000-4000 in value.

The wavelength measure in time was very erratic. I will make another post about the time period of the waves in the future but it makes for interesting reading.

For now it seems BTC/USD is as volatile as ever but the waves lower in recent times seem to be bigger in value in comparison to bullish moves. Lets keep number crunching to see if things change.

Bitcoin has been in a lull for more than two weeks apart from the brief rally that catapulted it to levels above $9,400 on Thursday. On the downside, the largest cryptocurrency has established support at $9,200.

Ripple performed incredibly well this week, shifting attention back to the major cryptocurrencies. Bitcoin tried to follow the rally but was held back by the resistance at $9,450. Ethereum recovered significantly ...

Ethereum recovery towards $250 was recently cut short at $245. The price started to narrow down towards $240 again. At the time of writing, ETH/USD is trading at $240.50 amid a sideways trading action.

XLM dropped from $0.0906 to $0.0868 so far this Friday as the bears took control following four consecutive bullish sessions. The price has dropped below the $0.09-level and is looking to fall back ...