The price of XTZ was sent higher today after Binance launched the fee-free staking of Tezos today (Tuesday, December 3rd).

If you have not heard of Tezos it is a general-purpose open-source blockchain project that can "evolve by upgrading itself.".

So this means the coin can update itself without a hard fork.

his is important as the suggestion or expectation of a fork can divide the community, alter stakeholder incentives, and disrupt the network effects that are formed over time. Because of self-amendment, coordination and execution costs for protocol upgrades are reduced and future innovations can be seamlessly implemented.

In regards to governance:

The election cycle provides a formal and systematic procedure for stakeholders to reach agreement on proposed protocol amendments. By combining this on-chain mechanism with self-amendment, Tezos can change this initial election process to adopt better governance mechanisms when they are discovered.

This funding mechanism encourages robust participation and decentralizes the maintenance of the network. Fostering an active, open, and diverse developer ecosystem that is incentivized to contribute to the protocol will facilitate Tezos development and adoption.

When talking about the support from Binance:

cryptoglobe.com have made a concise explainer of some of the concepts for Tezos.

Smart Contracts and Formal Verification. Tezos allows the creation of smart contracts and decentralized applications (DApps). It has a native smart contract language called Michelson that makes formal verification easier. A Delegated Proof-of-Stake (DPoS) consensus mechanism. XTZ token holders take part in the consensus process by staking (i.e. locking up) -- which in Tezos land is called "staking" -- their tokens for the right to validate blocks. XTZ holders may delegate their tokens to bakers whilst retaining ownership of the tokens. Bakers receive block rewards, the substantial portion of which are distributed to those XTZ token holders that delegated their tokens to them. This means that even if you do not hold enough XTZ to become a full baker you can still take part in the block validation/reward process.

The price of XTZ/USD has rocketed in recent sessions. Moving from 0.7539 to 1.2967 in just over a month. The next wave high is 1.43 so if the bulls are to keep control of the market that is the next level to keep an eye on. 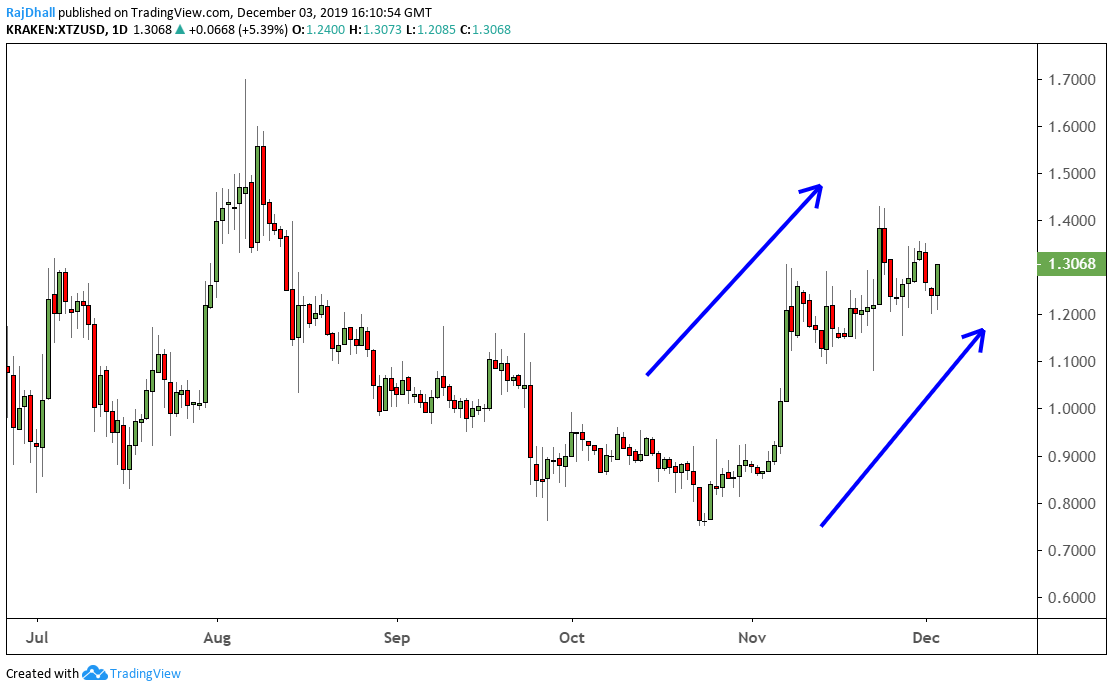 BTC/USD has barely changed since the start of the day and gained nearly 1.2% on a day-to-day basis. The first digital asset is changing hands at $9,400 after a move to $9,445 during early Asian hours.

Bitcoin Cash (BCH) topped at $246.04 on Wednesday and retreated to $243.00 by the time ow writing. Despite some wild price gyrations, BCH has stayed mostly unchanged both on a day-to-day basis and since the beginning of Thursday.

XMR/USD surges over 3% on a daily basis

The crypto market is back in the red after a fruitful trading session on Wednesday. The larger cryptocurrencies are leading with retreat, especially for Bitcoin and Ripple.