The central bank of South Korea finds cryptocurrency effect on the local financial market to be a drop in the ocean. This is according to the latest report that took into account the balance of digital assets in the commercial banks in the country. By the end of 2017, the domestic banks had the balance at $1.79 billion. The Bank of Korea (BOK) considers this figure to be too small to cause any significant impact on the financial market. Therefore, the report suggests that virtual currencies do not pose any risks at the moment. A section of the report reads:

“The amount of crypto-asset investment is not really big, compared with other equity markets, and local financial institutions' exposure to possible risks of digital assets is insignificant. Against this backdrop, we expect crypto-assets to have a limited impact on the South Korean financial market."

It is also vital to note that the report took into account the surge that had Bitcoin trade almost at $20,000 in December 2017. In the same week the report was released, the Korean Financial Services Commission (FSC) said that it was open to the virtual currencies and is going to align itself with the vision of the G20 group of nations to come up with “unified” regulations for the industry.

Bitcoin price is trading a classic rising wedge pattern with the upside capped below $6,784. The price has been recording higher highs and higher lows since it recovered from the trip downstream below $6,000. It is, however, lacking enough momentum to overcome the resistance at $6,800 before attacking the critical level at $7,000.

The Bears appear to have the control on Monday, besides, Bitcoin price has broken the short-term support at $6,700. The stochastic RSI has changed direction downwards to show the presence of selling activity. The 100 SMA will prevent declines above the stronger support zone at $6,600. The 61.8% Fib retracement level with previous high at $6,784 and a low of 5,775 is highlighted as another support area. 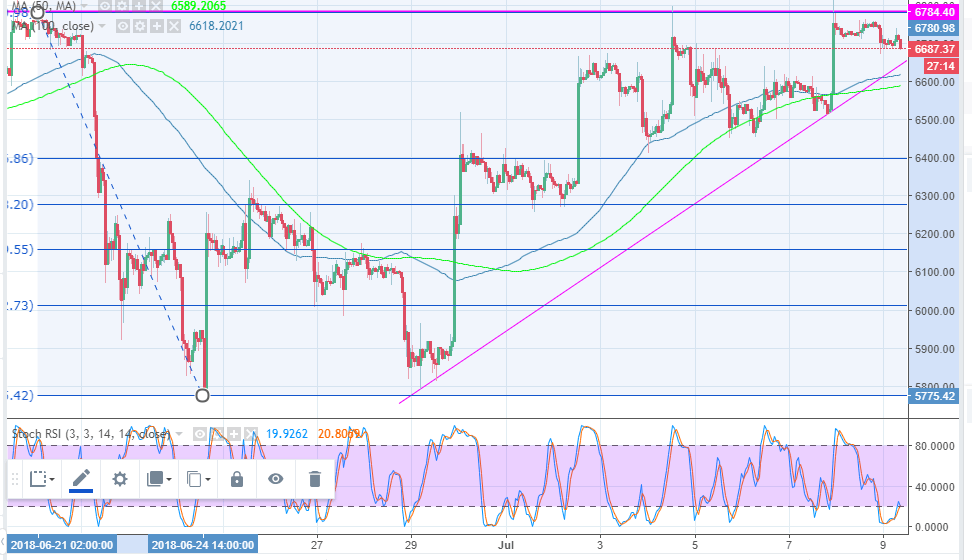