Avalanche (AVAX) price has been on a tear while global cryptocurrencies face quite some headwinds with muted price action and devaluations unfolding. AVAX price has seen a steep upside rally worth  a 32% gain in just three trading sessions but needs to come off the buying pressure a bit before the next leg up.

With that, the Relative Strength Index (RSI) has overshot boundaries and is trading in the overbought area, with limited upside potential for any new bulls entering now, making it ideal for some profit-taking and offering some entries for new buyers into the rally.

AVAX price rally due for intermission, with more gains to come

AVAX price saw an acceleration in its rally as investors were looking for gems in the current downturn that is dictating price action within global cryptocurrencies. In that search, AVAX price has been labeled one of those gems and saw buy-side exploding and accelerating its rally with 32% of appreciation in just two to three trading sessions.

AVAX price is currently undergoing some profit-taking as it forms a double top at the $111 highs. Red lights are flashing that AVAX price action is overheating, the RSI is in overbought mode and fresh buyers are refraining from stepping in as more upside for now looks limited. Expect AVAX price to take a breather with the monthly R3 resistance level at $102 holding support, or a return to $90 and the purple ascending trend line which has provided the backbone of the uptrend in November. 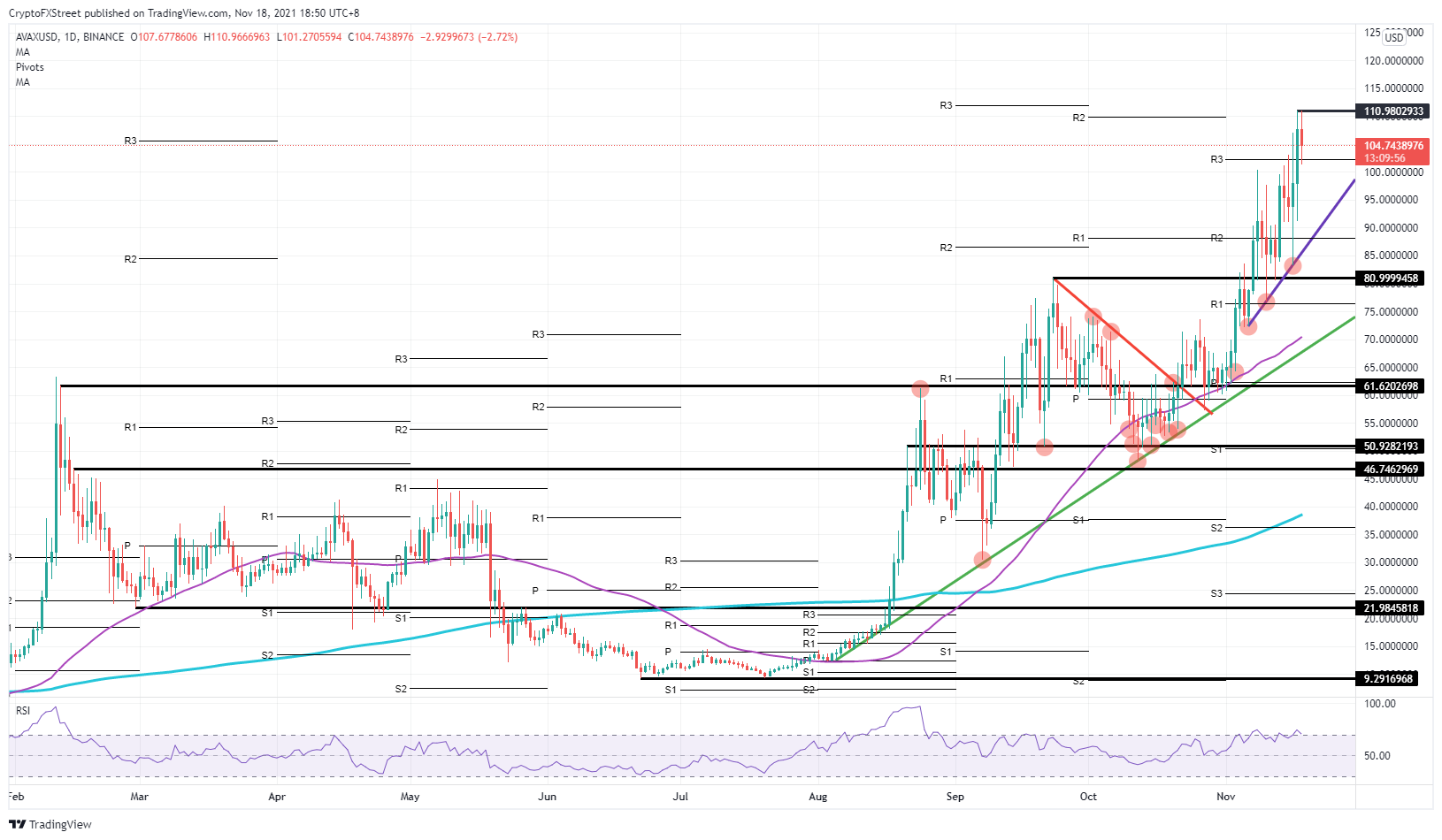 Expect AVAX’s price to take a short breather, with either a very tight controlled window of profit-taking against the monthly R3 resistance level or a bigger constriction of this rally, as the elastic band is pulled back, primed for a shot to new all-time highs. Preferably, a bigger constriction would be more profitable in the long run, as the RSI would get a chance to dip more towards moderately neutral levels around 50 instead of hovering around that overbought limit.

To the upside, a retest and break of the double top at $111, should see price action acceleration as the break will alert buyers that did not engage on the lower levels for a pickup in AVAX price action. Expect after the pop, a test for support on $111, followed by a stretched move upwards towards possibly $140, which was a profit target level in October. This way, the next phase in the uptrend would hold at least another 25% of gains after breaking the double top, and in the process making new all time highs along the way.