The only relevant macroeconomic data to be out this week will be out this Wednesday, US March inflation, and later on the day the latest FOMC Meeting Minutes. Both are quite linked, as inflation is one of the two legs in which Fed's decisions rest. However, the market has long known that the US Central Bank rather focus on the PCE as an inflation barometer, than in this monthly figure.

US yearly inflation has been around Fed's 2.0% target since last October, after bottoming at 1.6% in June last year, although monthly gains have been a bit more erratic and no doubts soft. For this March, monthly inflation is expected to remain flat after a modest 0.2% in February, while the YoY figure is foreseen up 2.4% from a previous 2.2%. Core readings, excluding volatile energy and food prices, are seen up 0.2% and 2.1% respectively. If the numbers are in line with market's expectations, then the Fed will remain on track of rising rates again at least twice this year. Hopes of a fourth rate hike have been dented by the latest FOMC dot-plot, which showed that policymakers still foresee three rate hikes this year, despite Powell's suggestion that a fourth one is possible.

Overall, the report is expected to have a limited impact on the greenback, and therefore dollar's pairs, as sharp divergences seem unlikely considering the latest US data that points to the mild gain forecasted. Furthermore, political woes have been largely overshadowing macroeconomic data, and this won't be an exception.

FOMC Meeting's Minutes, on the other hand, have higher chances of affecting prices. You can read more about it, here.

In the meantime, the EUR got a boost from speculation that the ECB could trim QE later this year, but not enough to move the EUR/USD pair outside its comfort zone. The pair has been ranging pretty much for two months already, with lower highs being a norm weekly basis, something that should be a sign of a bearish breakout, but that should be taken with a pinch of salt, given absent demand for the greenback, precisely due to all the political uncertainty coming from the US.

Gains beyond 1.2415 could favor another leg higher up to the 1.2480 region, should US inflation disappoint, while a strong reading could see the pair falling to the 1.2250 region, where buying interest is expected to surge. 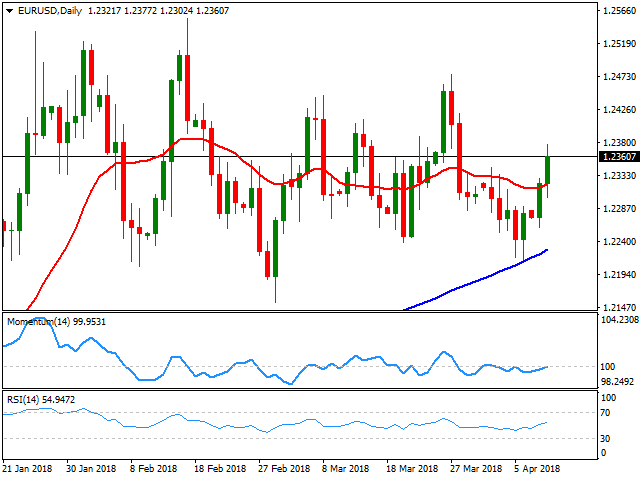