For three months American consumers have told surveys they are unhappy. Not just mildly upset but suffering an attack of pessimism not seen in a decade.

In August, seemingly out of the blue, the Michigan Consumer Sentiment Index plunged to 70.3 from 81.2. For the previous five months consumer outlook had plateaued about 10 points above the pandemic low of 71.8 from April 2020. In September sentiment rose slightly to 72.8. In October it fell back to 71.4.

Except for the pandemic collapse in the spring of last year of almost 30 points in two months, the August drop was the largest one-month decline since October 2008 at the height of the financial crisis.

The last time the Michigan Index was as low as August was December 2011. The October score is below the pandemic bottom in April 2020.

Are US economic conditions that dismal?

Whatever was annoying consumers in August, it wasn’t the labor market.

Nonfarm Payroll hiring in June and July averaged over one million new positions each month. Job creation was the strongest since 7.7 million people were re-employed in May and June last year in the initial recovery from the lockdown debacle.

August’s slowdown to 366,000 looks bad in comparison to the 750,000 expected by economists. In reality, it isn't that far from the 517,500 average of the prior 12 months. A one month drop in job creation does not equate to a decade low in consumer outlook.

Hiring fell in August and September but it was not because the economy didn’t have employment.

The Job Openings and Labor Turnover Survey (JOLTS) reported 10.4 million open positions in August, down slightly from the all time record of 11.1 million in July. 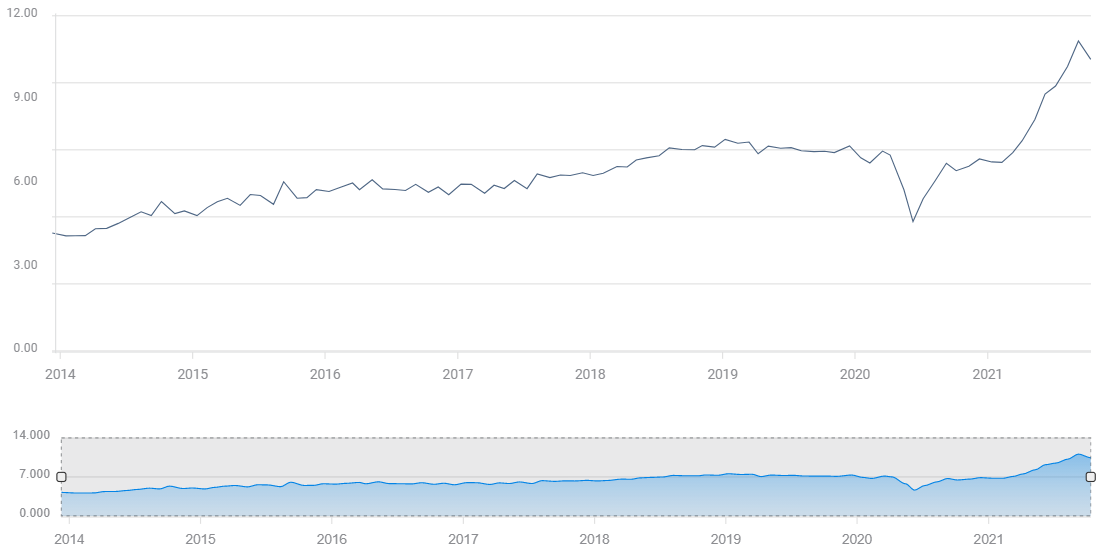 Employers were desperate for help. Hiring fell because people did not seek the jobs on offer.

Worker diffidence has been blamed on the continuing pandemic, vaccination mandates, extended unemployment benefits and a preference for flexible homework which may not register in official statistics.

The JOLTS data set successive records for the greatest numbers of open jobs for five straight months from March through July.

Labor shortages have prevented many businesses from operating efficiently or at full capacity, despite strong demand. One remedy, tried by many firms across the country, is higher wages and bonuses.

Annual Average Hourly Earnings have more than doubled in five months, from 1.9% in May to 4.6% in September. These increases are not the result of a statistical recovery based on a collapse in wages a year earlier. If anything the May to September 2021 data understates the increases since the average monthly gain in those months in 2020 was 5.2%.

Employers are paying more because they must. Employees are the beneficiaries. That is why 4.3 million people quit their jobs in August, a record, with the greatest number in accommodation and food service, according to the Bureau of Labor Statistics. Workers don’t leave employment in such numbers unless they are certain of finding new, and likely, better paying jobs.

Consumers dislike inflation. Rising prices are a direct and immediate tax on income. Wages increase only at long intervals, household expenses can climb every shopping trip.

The current bout of rising prices is just six months old. In March the annual Consumer Price Index (CPI) was 2.6%. Even though by September CPI had more than doubled to 5.4%, expectations for long-term inflation have remained subdued.

Consumers no doubt hate paying 50% more for gas, but that is probably not enough to change their whole economic outlook.

Were consumers truly worried about the future, their retail behavior should reflect that concern. Households might be expected to promote savings over spending, restrict discretionary purchases and forgo large expenditures.

This has not happened.

Retail sales rose 0.9% in August and 0.7% in September, belying the dour predictions for declines of 0.8% and 0.2% respectively.

Americans have not been deterred from large financial commitments. The September goods figures will be released on October 27.

Markets focused on the consumption facts in the September Retail Sales figures rather than the sentiment numbers in the Michigan Survey.

The dollar was slightly lower on the day in all the major pairs except the yen where it closed above 114.00 for the first time in three years.

Consumer sentiment, normally a reliable indicator to consumer spending, seems to have lost its guidance.

The disconnect is striking. Americans are unhappy. Sentiment has plumbed a decade low for three straight months.

Naturally enough analysts took those feelings and extrapolated a reflective decline in consumer behavior, that is, a substantial decline in retail sales. Economic logic argues that if consumers are worried they should begin to pull back on consumption in preparation for difficult conditions ahead.

This did not happen. Retail Sales were far worse in July at -1.1%, with a much higher sentiment index, than in August and September. When consumer outlook plunged, sales rebounded.

Consumer sentiment was designed and has always been seen as an economic measurement. When viewed against a stable political and cultural background that has been accurate.

The current American scene is far from stable. By most measures political and cultural polarization is at an all-time high. Many Americans seem to have moved from disagreement with their neighbors to active dislike and even distrust.

Perhaps the Michigan Index is registering unhappiness with something other than the economy.

Have these unexpressed emotions begun to seep over into polls of economic welfare? By most objective measures the economy is quite good for workers.

The next few months will tell if the separation between economic sentiment and reality is speculative or permanent.

One thing is certain, there is no shortage of unnerving developments in the United States or the world.  A glance at the headlines suffices.