Global stocks were little changed on Tuesday as the focus shifted to major corporate earnings. Some of the companies that are expected to publish their results are Johnson & Johnson, Philip Morris, and Bank of New York Mellon. Netflix, the giant streaming giant will publish its results after the market closes later today. In general, analysts expect that these companies will release strong results. Also, they expect that more firms will provide more details about costs as the prices of key inputs rise.

In Europe, the DAX, FTSE 100, and CAC 40 were little changed while in the US, futures tied to the Dow Jones and Nasdaq 100 indices are up by about 0.20%. The top movers in Europe were mining stocks as the prices of key commodities rose. On the other hand, IAG, the parent of British Airways, shares declined sharply after signs that Heathrow Airport will increase prices. Shares of Ericsson, declined sharply after the company issued weak guidance.

Bitcoin held steady as investors wait for the launch of the first futures contract ETF fund that will be launched by ProShares. The fund will have a ticker symbol of BITO and is expected to start trading today. Analysts will be watching to see how strong the inflows in the fund are. Analysts also expect that more Bitcoin ETFs will be launched soon. Also, there is a likelihood that more cryptocurrencies like Ethereum, Ripple, and Cardano will have their own ETFs launched soon.

The British pound rose to the highest level since September as odds of a more aggressive Bank of England (BOE) rose. In a speech on Sunday, Andrew Bailey, the head of the Bank of England (BOE) hinted that the bank could take a more aggressive stand in the coming months. Analysts expect that the bank could start tapering in its November meeting and then start hiking in December. This is because consumer prices are expected to keep rising. For example, the number of truck drivers in the UK has dropped sharply, which could lead to more supply shortages.

The GBPUSD pair has been in a strong bullish trend in the past few days. The pair rose to a high of 1.3805, which was the highest level since September. The pair moved above the upper side of the key resistance level at 1.3772, which was the highest level on Monday. It also rose above the short and long-term moving averages. It is also along the upper side of the Bollinger Bands while the Relative Strength Index (RSI) and MACD have risen. Therefore, the pair will likely keep rising as bulls target the key resistance at 1.3850. 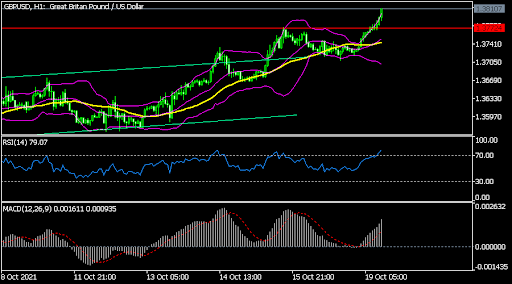 The EURUSD pair rose to a high of 1.1667, which was the highest level since September 29. On the four-hour chart, the pair moved above the key resistance at 1.1625. This level was the neckline of the inverted head and shoulders pattern. The bullish view is also being supported by the 25-day moving average while the MACD has moved above the neutral level. Therefore, the pair will likely keep rising as bulls target the 50% retracement level at 1.1715. 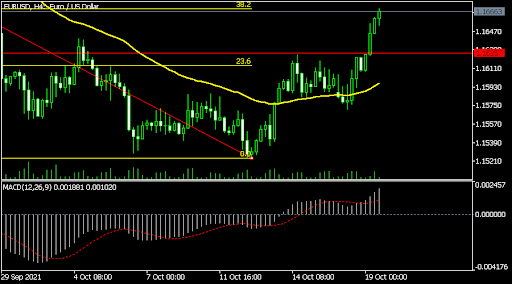 The USDCHF pair declined to the lowest level since September 15 as the dollar sell-off continued. On the four-hour chart, the pair moved below the key support at 0.9195, which was the lowest level last week. It has also moved below the neckline of the head and shoulders pattern. The pair has also dropped below the 25-day and 50-day moving averages. Therefore, the pair will likely keep falling as bears target the key support at 0.9150. 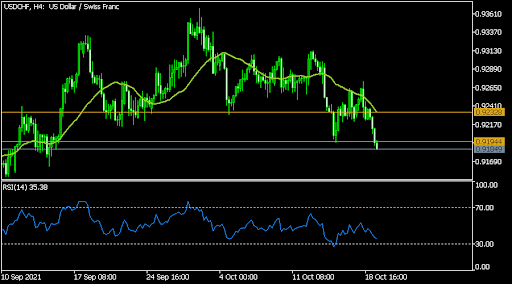