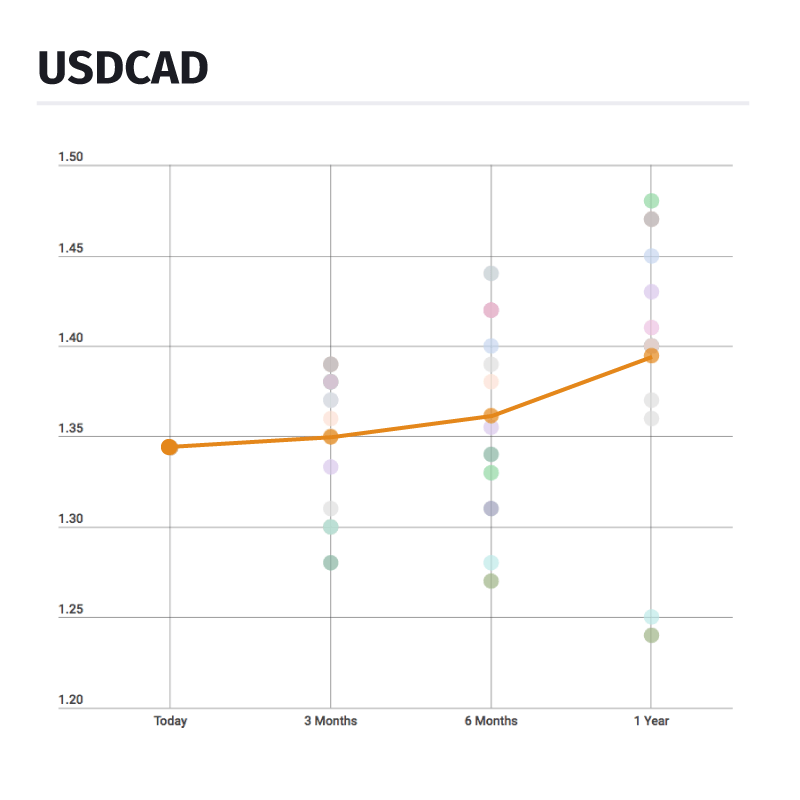 David Cheetham: "The Loonie is a contender for the worst performing major this year. Skepticism around the sustainability of the recent rise in Oil prices due to the OPEC and non-OPEC deal as well as a deflationary environment present major twin threats to a rise in CAD"

Lukman Otunuga: "A strengthening Dollar could ensure the USDCAD remains bullish this year. The threat of OPEC and Non-OPEC failing to cut production may weaken the Canadian Dollar consequently elevating the USDCAD higher. Technical traders may pay attention to how prices react to the 1.3900 level"

Markus Gabel: "Big uptrend at the moment and should be stable further with necessary corrections"

Przemyslaw Kwiecien: "There's plenty of upside from yield spreads on this pair and with relatively soft Canadian economy we see the pair higher. We also assume a rocky path for oil prices in 2017 which is USDCAD positive"

Thomas Light: "Trade issues around possible NAFTA renegotiation and a strengthening US economy will be key. Question marks over real OPEC cuts will linger"

Yohay Elam: "The Canadian dollar could be the big loser of 2017 due to oil prices remaining low, a slow transition to other sectors and not enough US demand for Canadian goods"

Growth Aces Research Team: "We expect continuation of rises on commodities markets. We expect the Canadian dollar to be the main beneficiary of the rise in oil prices. The CAD’s outperformance of its commodity FX peers since the OPEC agreement to cut production in the first half of December suggests that the market is gradually aligning itself with our constructive view of the currency. Canadian employment dynamics have improved significantly since oil production returned in the second half of 2016. In due time, this should be reflected in higher inflation, which is not far from target anyway. Following that, markets are likely to start bringing forward the timing of rate hikes. Our CAD outlook for 2017 is strongly bullish"