The hoary market cliche ‘never buck the Fed’ found new life this week as markets continued to price in a bond taper despite the huge miss in the US September Nonfarm Payrolls.

Treasury rates have been rising since the last Federal Reserve meeting on September 22. The 10-year yield added another 14 points this week to 1.6%, despite an initial dip after the NFP report, bringing the gain since the Federal Open Market Committee (FOMC) to 27 basis points.

This benchmark bond had briefly reached 1.746% on March 31 in the Treasury markets' premature first approach to a tapering of the Fed’s $120 billion month of bond purchases.

Initially, the USD/JPY tumbled on Friday’s payroll report, falling 30 points to 111.51, but within an hour the pair had soared to the week’s high at 112.00, before stabilizing near 111.85. The break of 112.00 just before the London close, and the continued gains in US Treasury yields portend further gains for the USD/JPY. 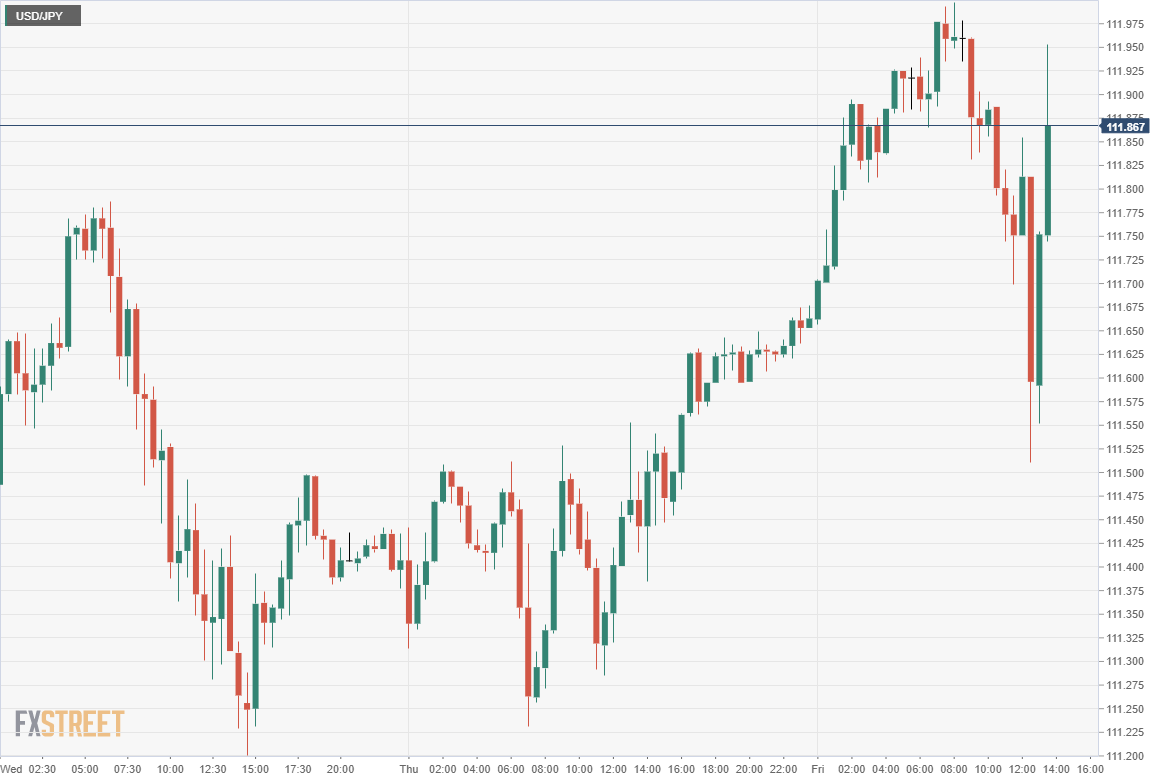 Japanese inflation data improved. Annual Tokyo CPI for September moved above zero for the first time in a year. August economic information remained downbeat with the Coincident and Leading Economic Indexes polling below expectations and July’s readings. Labor Cash Earnings in August were as expected but Overall Household Spending was weaker than forecast, suggesting the Japanese consumer will be adding little to any prospective recovery.  An early view on September from the Eco Watchers Survey, which tracks regional trends, showed the highest reading for outlook in seven years while the current attitudes remained depressed.

In the US, the balance of the NFP report was positive. Unemployment fell to 4.8% from 5.2%, far more than the 0.1% expected improvement, though largely because people left the counted workforce. Annual Hourly earnings rose 4.6% on the year as forecast. Optimism rose in the manufacturing and service sectors. Purchasing Managers’ Indexes were stronger in September, with the notable exception of the employment measures.  Initial Jobless Claims reversed lower after rising for three straight weeks.

The Federal Reserve’s pending bond taper and the resulting higher Treasury rates are the main order of market business. The USD/JPY will continue to rise as long as Treasury yields push higher.

Despite the dismal September job numbers, markets remain convinced that the Fed will keep its word and begin a bond program reduction this year.

The USD/JPY is close to the top of its three year range. Except for the February and March 2020 panic spikes, and a few days in April 2019, the last time the pair spent any time above 112.00 was in the second half of 2018. The area above 112.00 has no technical impediments to a rise in the USD/JPY. 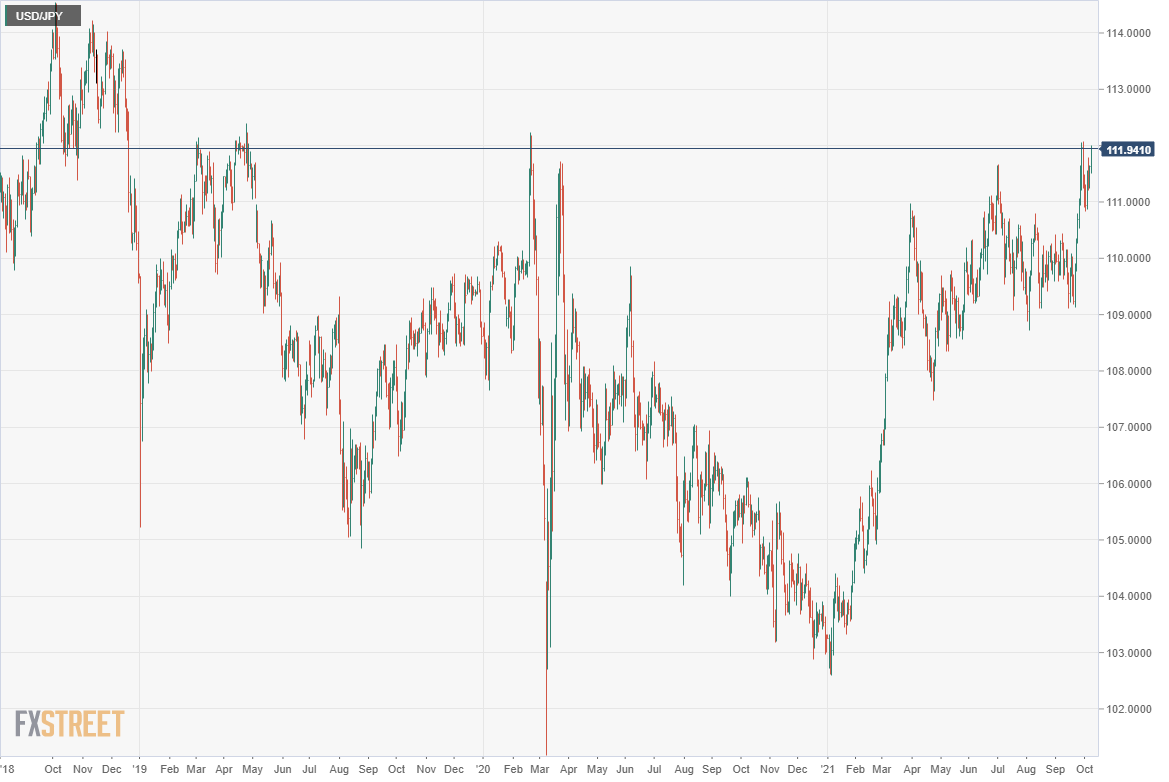 Japanese Industrial Production data for August due on Thursday will have little to no market impact.

In the US CPI and PPI information for September will show inflation running hot, a reinforcement if not the reason, for the Fed's taper commitment. Retail Sales for September are expected to drop but may surprise as they did in August.  Positive US data supports the pending Fed taper announcement and the US dollar. 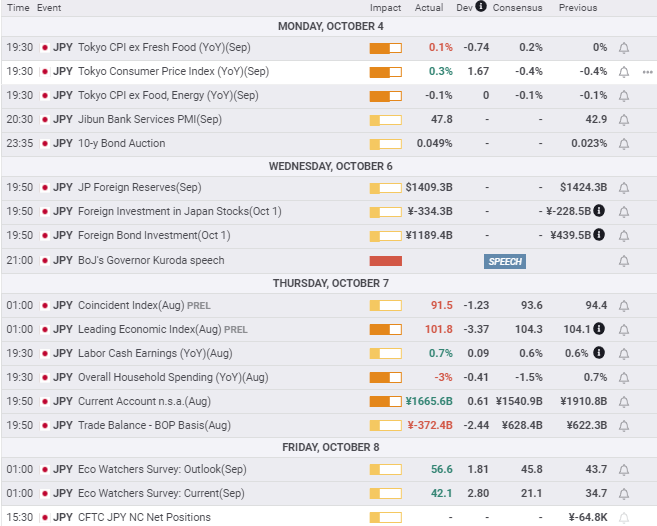 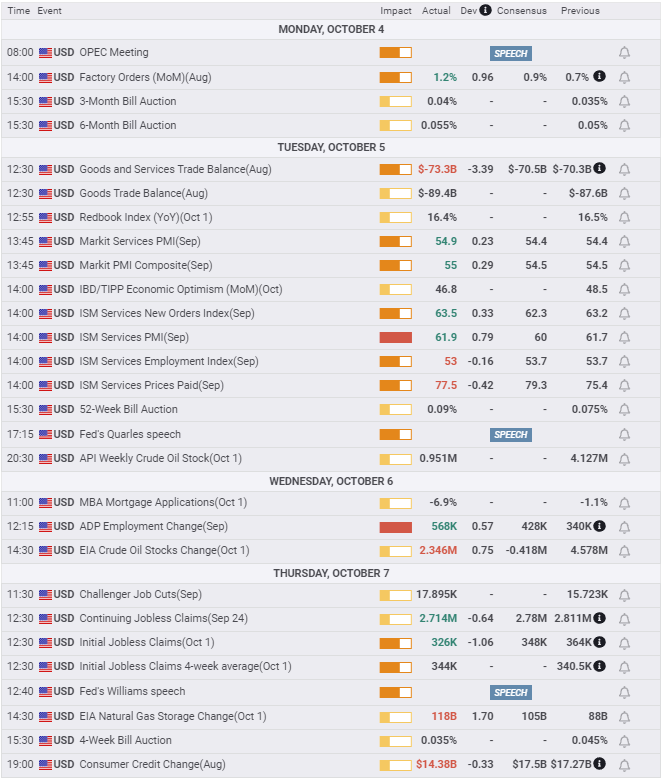 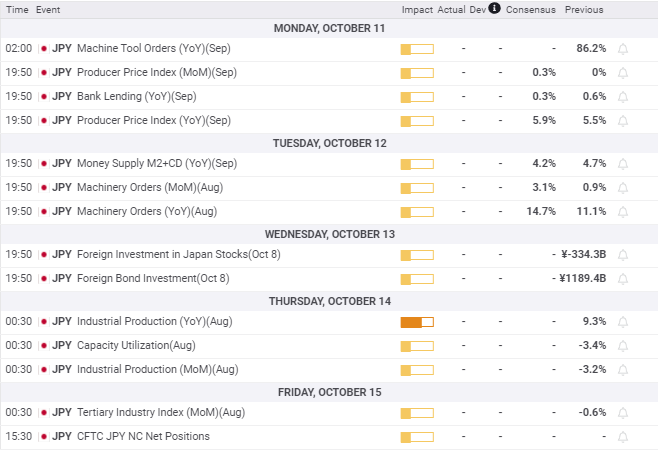 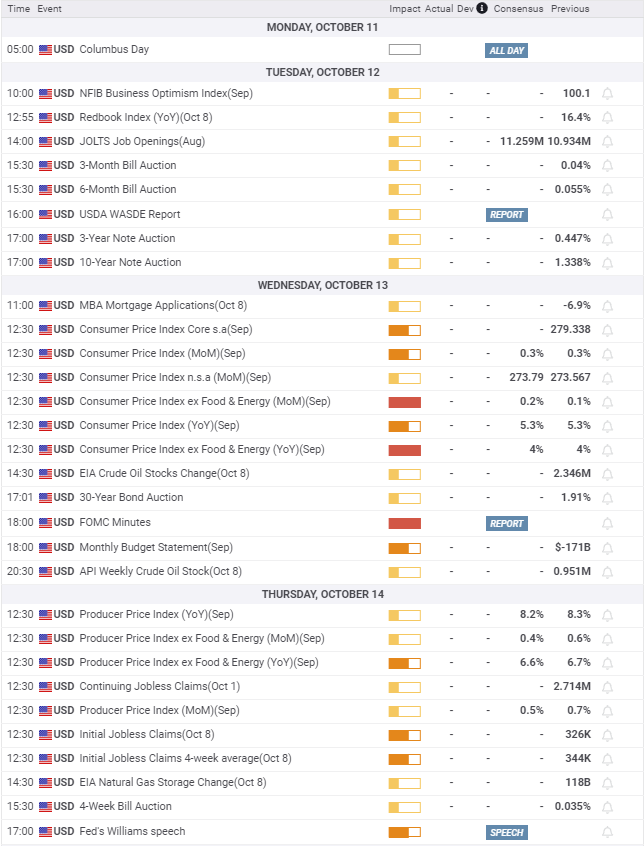 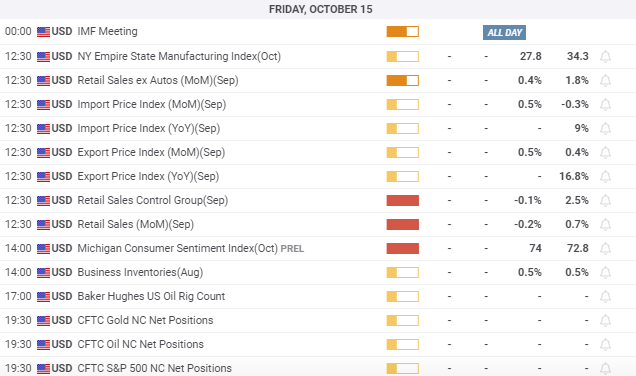 The week's gains and especially the move above 112.00 on Friday have give the momentum indicators a strong positive aspect. The MACD (Moving Average Convergence Divergence) is at its highest level since mid-April. The Relative Strength Index (RSI) nearly reached overbought on Friday, as it was on September 29 after the steep ascent from 109.00. True Range revived following a mid-week decline. 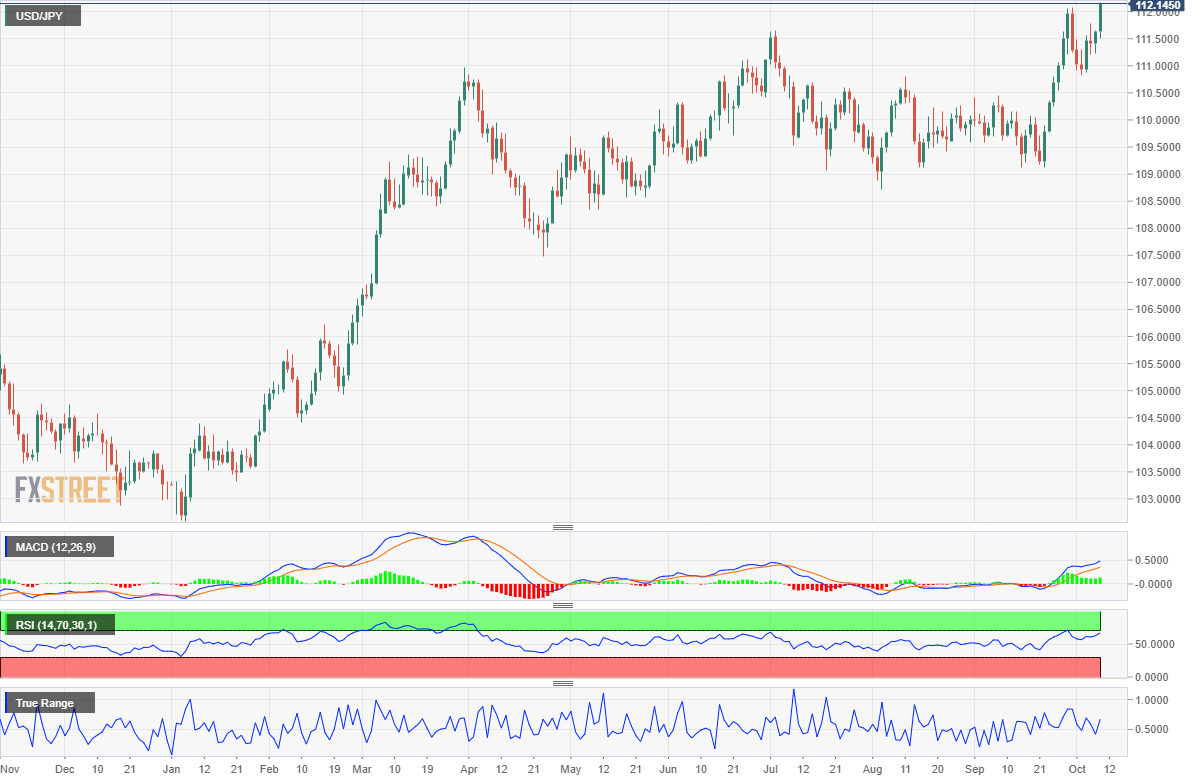 The upward inflection of the 21-day, 50-day and 100-day moving averages (MA), after the USD/JPY crossed 110.00 on September 23 has been predictive of its subsequent rise. The near parallel of the 50 and 100 day averages and their slope are an indicator of strong upward momentum. 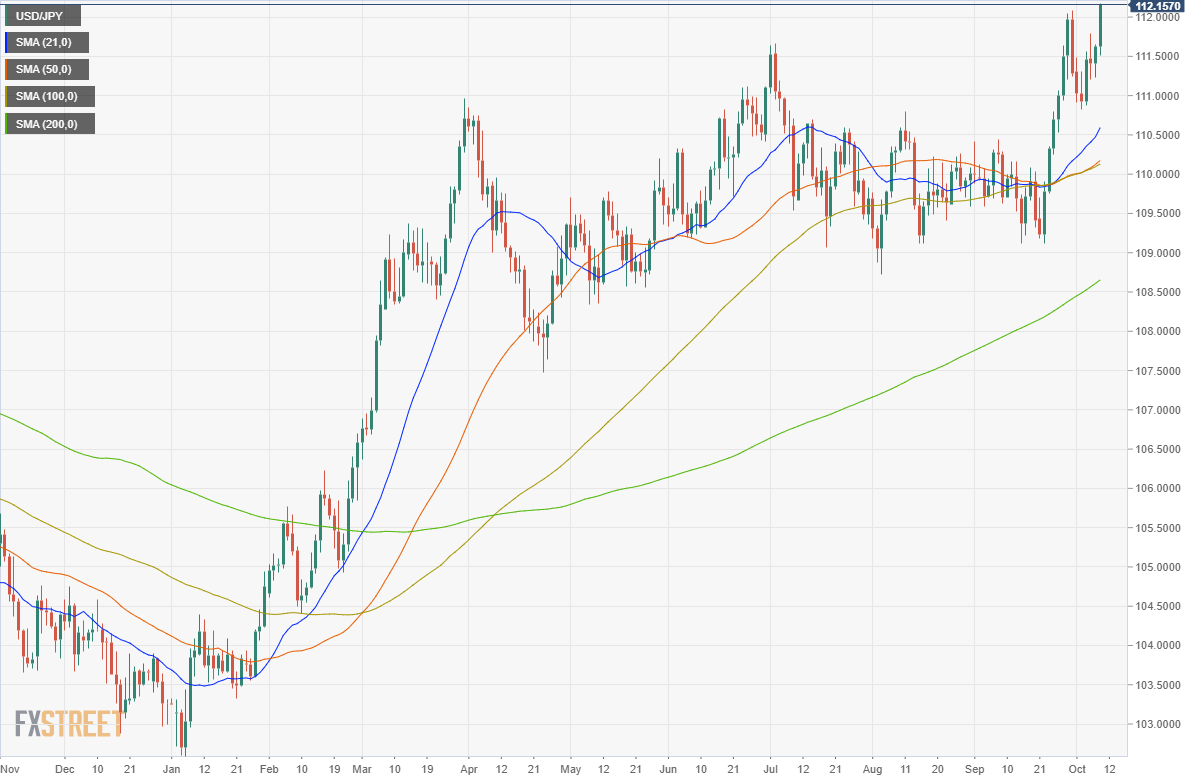 Support and resistance lines are highly unblanced. Support is recent and well-traded, though much less so above 111.00. There are no resistance references above 112.00 closer than December 2018 making the upside far more vulnerable. 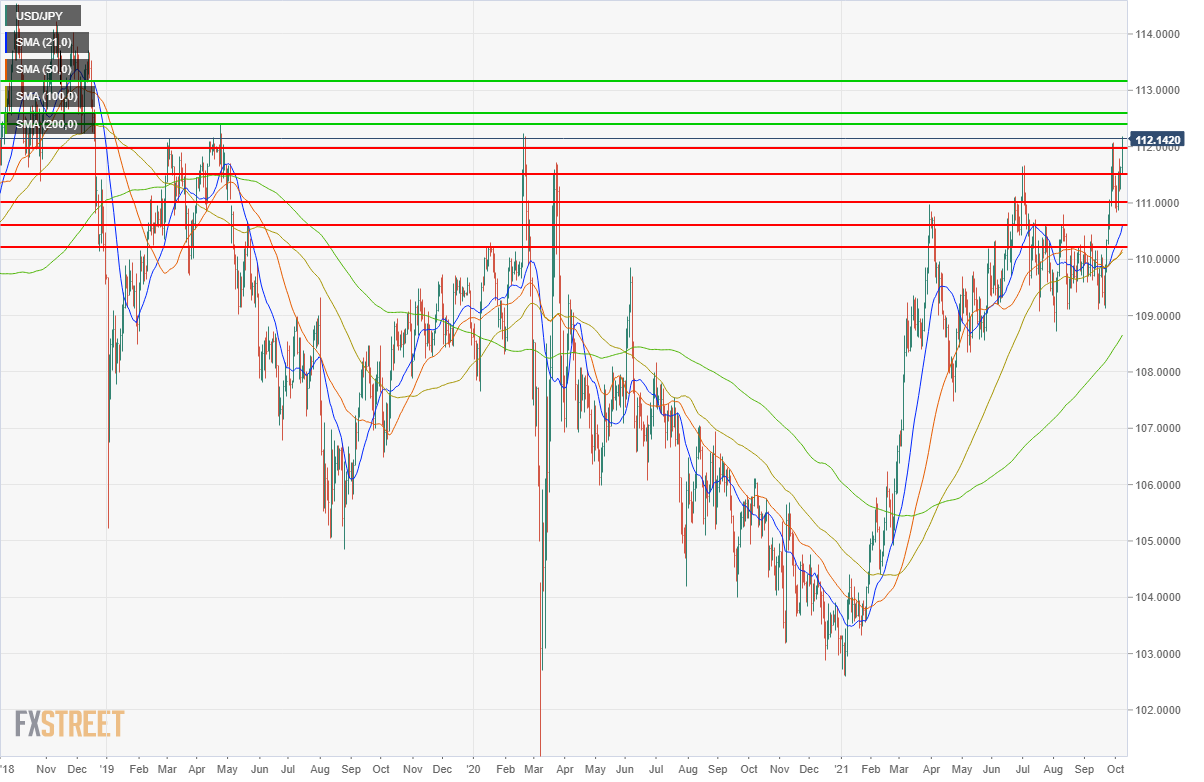 This week's FXStreet Forecast Poll is belied by the rise in US Treasury rates on Friday and the rise of USD/JPY through 112.00