Overall movement in USD/JPY was nil with the 103.81 open on Monday nearly matched by Friday's close. Though range was less than a figure from 104.09 to 103.33 the week was not entirely without interest.

The outlook in the USD/JPY continues to be dominated by the general trend lower in the US dollar. Until the American economy generates positive news the weak and weakening dollar will remain the default market mode, even if the actual momentum is quite limited.

The trend channel that orders the USD/JPY began in early July. With slight adjustment it could be extended back to the end of the panic market in April.

For the past three months a subsidiary narrower channel has developed within the larger formation, moving lower at a somewhat steeper angle.The upper border of this path was pierced on January 7 after the Bank of Japan (BoJ) issued their warning on currency rates, i.e. the strengthening yen. The USD/JPY low of 102.59 on January 6 had been the highest for the Japanese currency against the dollar since November 2016. Traders took the BoJ adviso as an excuse for profit-taking on the long decline rather than out of concern that the central bank would intervene in the market.

Since the move through the upper border of the inner channel the USD/JPY has been sandwiched between the sides of two separate, descending, but not quite parallel, channels. The unusual run is a oddity more than anything else, though it does illustrate the lack of energy in the USD/JPY as it waits for a change in the current scenario. 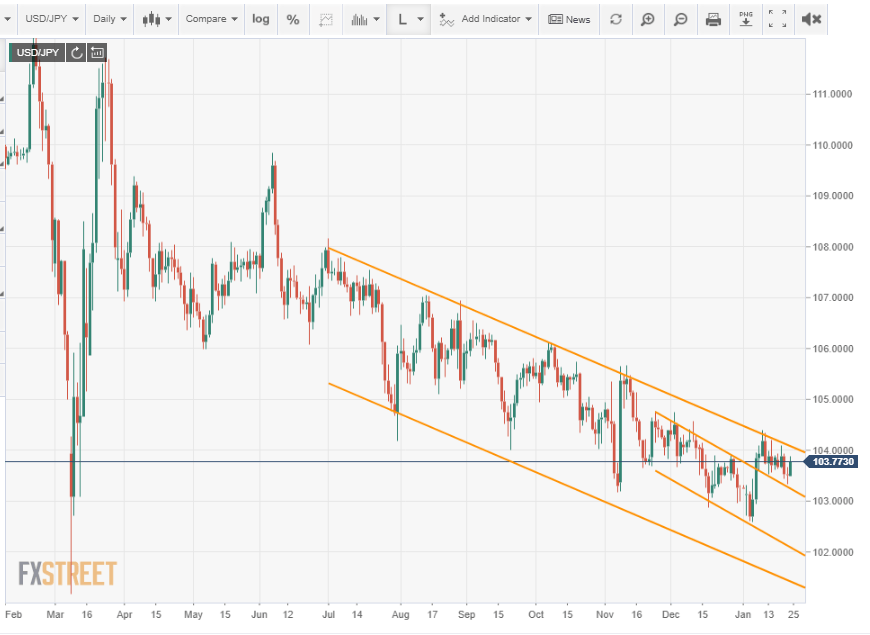 The Bank of Japan (BoJ) kept its base rate at -0.1% as universally expected and warned that the new COVID-19 measures could impact the recovery, saying that services spending will come under “strong downward pressure.” It raised the 2021 GDP estimate to 3.9% from 3.6%.

Bank of Japan Governor Haruhiko Kuroda said he did not think the risk of deflation was high even as annual National CPI fell 1.2% in December, the third negative month in a row. He suggested that the bank had extended sufficient stimulus to ease the shock from the pandemic, at least for now.

The BoJ has a policy review scheduled for the March meeting with a goal of making its tools sufficient for a long bout of the pandemic. Mr. Kuroda stressed that any steps by the BoJ would not lead to a reduction of stimulus. “Its too early to exit from our massive monetary easing program at this point,” said Mr Kuroda.

Annual exports rose for the first time in twenty-five months and imports fell less than expected in December for the first improvement in the foreign trade results in two years. Countering that gain the Jibun Bank Manufacturing PMI fell back into contraction in January after December saw the the first expansion in 20 months.

The US inaugurated its 46th President Joe Biden on Wednesday to minimal market reaction in a capital empty of crowds and patrolled by 25,000 National Guard troops.

An anticipated $1.9 trillion stimulus package has helped support equity markets and boosted Treasury returns though neither has assisted the dollar much.

Initial Jobless Claims fell to 900,000, the prior week was revised down by 39,000 and continuing claims fell to their lowest level of the pandemic but labor market concerns continue unabated. Housing construction and sales remained exceptionally strong, even in their quietest winter months, perhaps a sign of an impending boom in the spring.

Markets are waiting for a change in the US dollar scenario, in essence for concrete signs that the pandemic is abating and the global economy can fully reopen. Until then the expiring downtrend in the USD/JPY remains in place.

Japanese economic input into the USD/JPY has been relatively limited since the pandemic passed its panic stage, though the yen had a brief and intense run as a safety currency. The BoJ is generally seen as out of policy options.

Historically, the US has had the best recovery ability among the developed economies. There is no reason to assume that has changed. The $1.9 trillion stimulus will improve the perception of growth even if its actual economic impact will be largely limited to consumer spending.

The first step will be the end of lockdowns and partial closures in California, New York and elsewhere.That will likely be enough for a speculative surge in equities and a rise in Treasury yields. The second step will be evidence that the US labor market recovery has resumed. Signs of life in the restaurant, travel and hospitality sectors will be a welcome note of normality, even if a full return is probably months if not years away.

For the dollar the key is interest rates. If the Fed permits a gradual rise, the dollar will follow.

Technically, the sharp rise in the USD/JPY on November 11 and again on January 6 and 7, and the subsequent gradual descents have created a number of substantial support lines. These levels can rely on recent activity rather than on trading from the second half of 2016. In light of the weak descending energy these lines should limit USD/JPY losses. 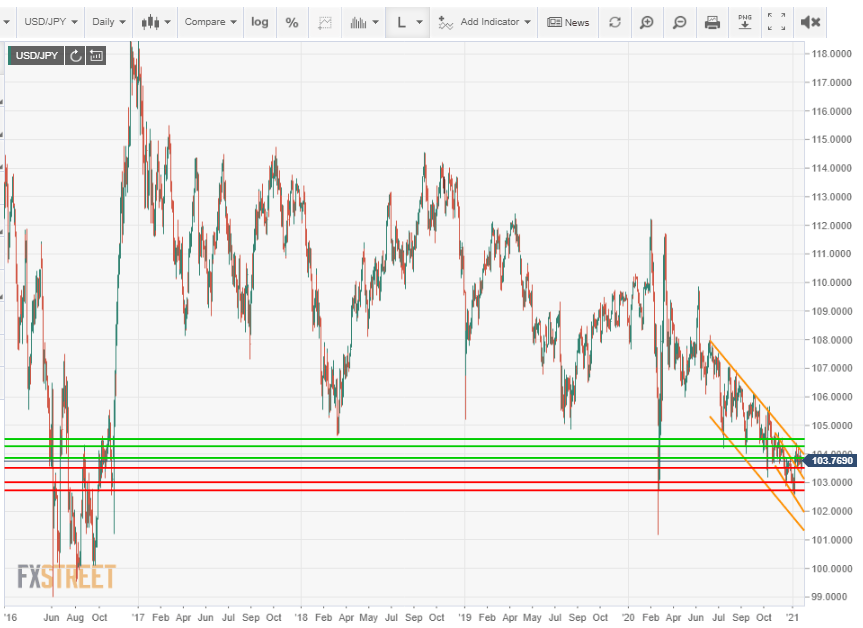 The Jibun Bank Manufacturing PMI slipped to 49.7 in January from 50 in December. A slight increase to 50.5 had been expected. 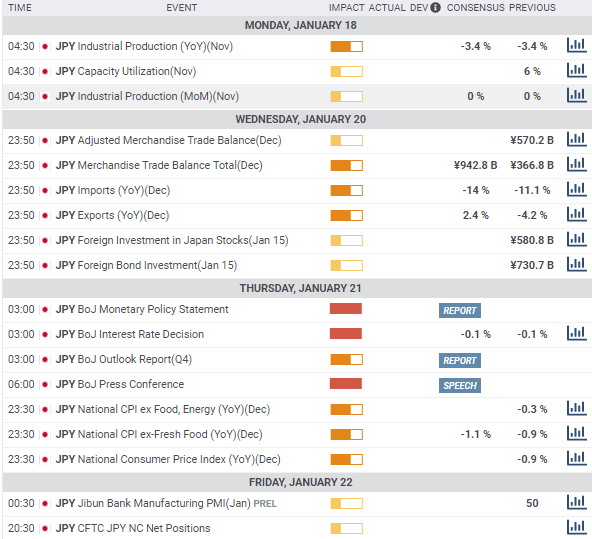 Existing Home Sales, Housing Starts, Building Permits and Markit's PMIs in Manufacturing and Services point to an economy lined up for the end of the pandemic.

Markit Manufacturing PMI in January rose unexpectedly to 59.1 from 57.1, 56.6 had been forecast. Services PMI climbed to 57.5 from 54.8 on a 53.6 prediction and the Composite Index came in at 58 after 55.3 in December. Existing Home Sales in December rose 0.7% to 6.76 million per annum, from 6.71 million in November. It was highest pace since 2006. Sales had been forecast to drop to 6.55 million. The jump was doubly unexpected as December is normally one of the slowest month of the year for home sales. 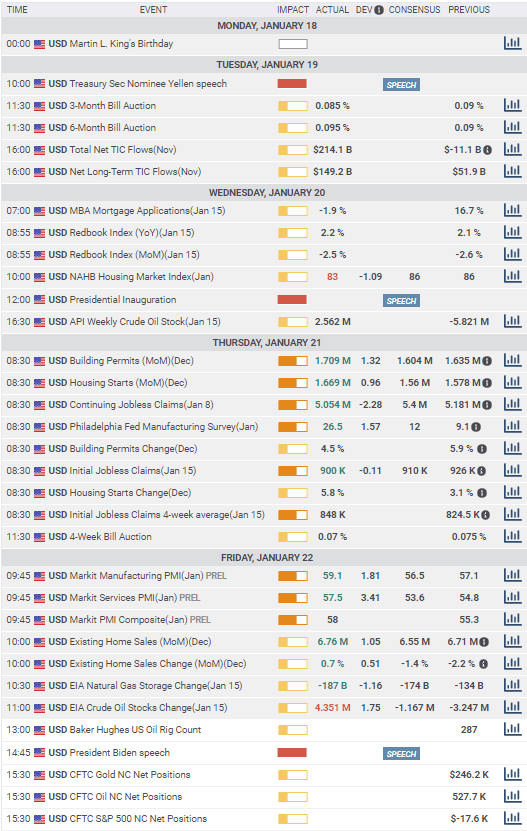 Deflation is again a concern for the Japanese economy and the BoJ. Retail Trade for December will give an indication on the health of the consumer economy.

The Corporate Service Price Index for December, which tracks the prices of services trades among companies, is due. The index fell 0.6% in November.

Tokyo CPI (YoY) in January is due. In December the overall rate fell 1.2%, ex Food and Energy dropped 0.4% and the ex Fresh Food rate decreased 0.9%. Industrial Production for December is scheduled. In November the monthly change was -0.5% and the annual was -3.9%. The Unemployment Rate in December is expected to climb to 3.1% from 2.9% prior. The Jobs/Applicants Ratio is forecast to fall to 1.04 in December from 1.06 in November.

Housing Starts in December are projected to drop 4.9% in December from November's -3.7%. Starts have fallen for 17 straight months to November. Construction Orders for December are out, they fell 4.7% in November. December's Consumer Confidence will be revised, first release was 31.8, the lowest since August. 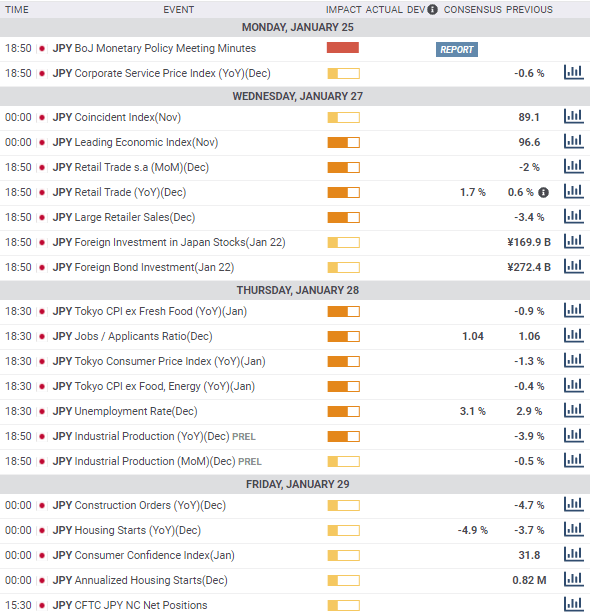 The Federal Reserve two-day meeting which finishes on Wednesday is the main interest. With no change expected in either the fed funds or the bond purchase program the chief curiosity will be Chairman Jerome Powell's discussion of the US economy in his prepared statement and news conference. Fourth quarter preliminary GDP on Thursday will run a close second to the Fed and has more potential for an unexpected result.

Conference Board Consumer Confidence for January is expected to edge up to 89.1 from December's  88.6.

Durable Goods Orders for December are forecast it rise 1% as in November. Orders ex-Transportation are expected to gain 0.5% after 0.4% in November. Nondefense Capital Goods ex-Aircraft, the proxy for business investment spending, was revised to 0.5% from 0.4% in November.

The Federal Reserve will leave the fed funds target range unchanged at 0.0% to 0.25% and bond purchases at $120 billion a month. 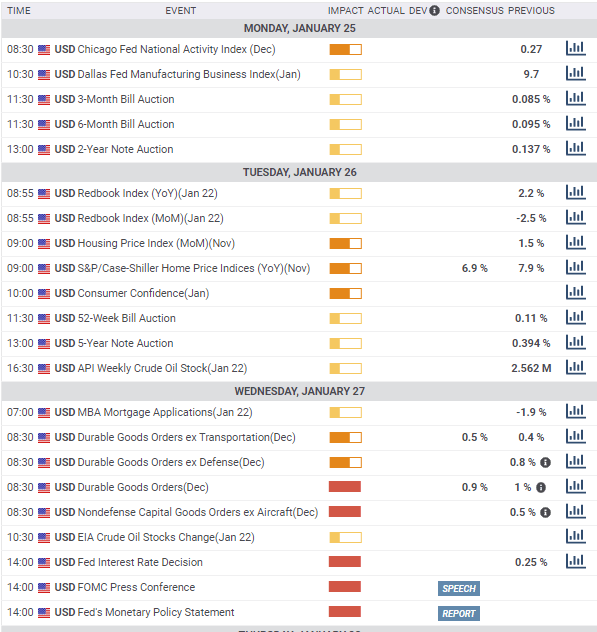 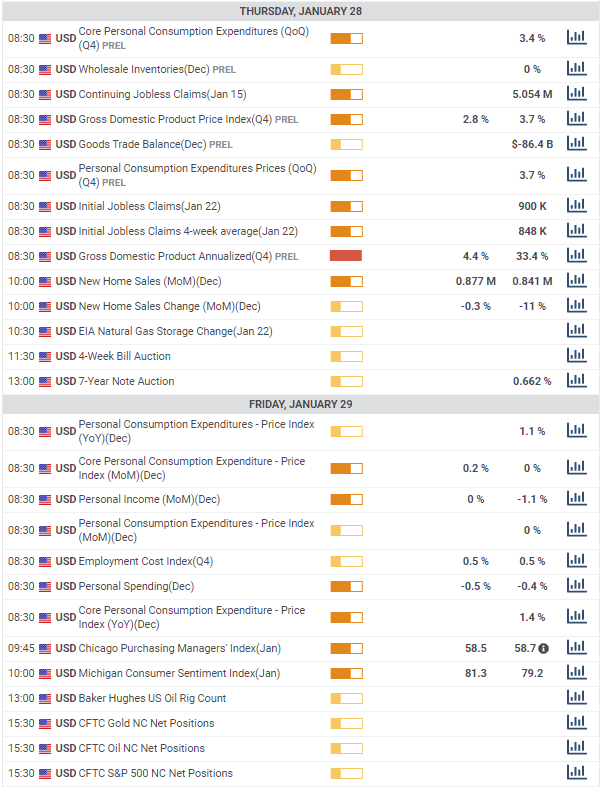 The sharp rise and slow descent pattern of the last three months has created a number of creditable support lines that reference recent activity and are far more substantial for that. Prior to November support below 105.00 drew primarily on trading from the second half of 2016. Resistance lines have the benefit of repeated activity over the past nine months. 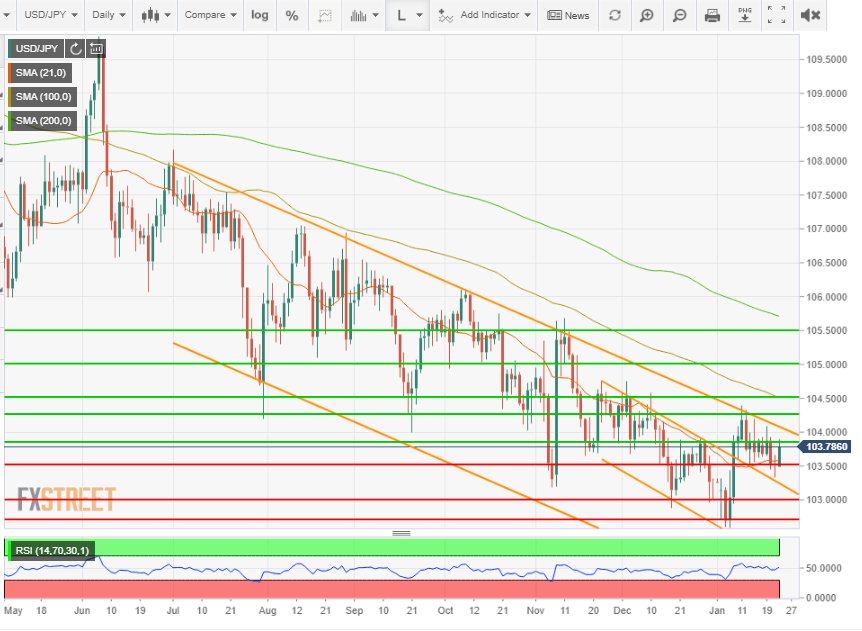 As with last week, the FXStreet Forecast Poll is, like the USD/JPY trend itself, but a weak endorsement of a lower pair. The one-week and one-month forecasts are less than 40 points from the close on Friday. Even the one-quarter view breaks no new ground as it is higher than the January 5 and 6 lows of just two weeks ago. This is not a picture of a trending currency.

GBP/USD rises toward 1.38 ahead of Brexit meeting