After gapping higher at the beginning of the day, the USD/JPY spent the rest of it in a tight consolidative range amid the absence of market's catalysts. The early advance came after  PM Abe's ruling coalition has won a clear majority with more than two-thirds of Parliament's 465 seats. The results were taken by PM Abe as an indication that voters support his policies, including monetary ones, with the market understanding that negative rates will remain for longer, as inflation gives no signs of picking up. During the upcoming Asian session, market's attention will be on the preliminary Nikkei manufacturing PMI for October, expected at 53.1 from previous 52.9. The pair posted a daily high of 114.09 before establishing a handful of pips below the 114.00 mark, retaining anyway its positive stance according  to technical readings in the 4 hours chart, as the price is far above marginally bullish 100 and 200 SMAs, whilst technical indicators hold near their daily highs, aiming to resume their advances. The opening gap was pretty much filled, but Friday's close at 113.43 is now a critical support, as to maintain the bullish stance, the pair should bounce quickly in the case of a retracement towards the level. To the upside, a break above 114.09 should lead to an advance towards the 114.40 region, a major static resistance, as the pair topped around it in May and July. 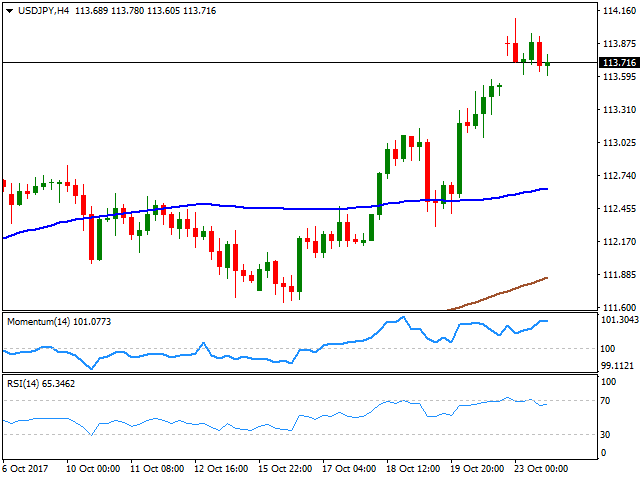