The USD/JPY pair surged  to a three-month high of 114.23 at the beginning of the day, as US Treasury yields soared ahead of Wall Street's opening, whilst the US released a better-than-expected US Durable Goods Orders report for the month of September. The yield for the 10-year note surged to 2.47%, its highest in seven months, also before the opening bell, backing the pair's rally. Nevertheless, and despite the US added another positive macroeconomic release, the pair begun retreating, as Wall Street fell on the back of worse-than-expected earnings reports. With little in the Japanese macroeconomic calendar ahead, the pair is trading with a short-term bearish stance, according to the 4 hours chart, as technical indicators head south, with the Momentum already below its mid-line and the RSI indicator at 52, both supporting additional declines ahead, moreover on a break below 113.23 the weekly low. In the mentioned chart, however, the price remains well above bullish 100 and 200 SMAs, suggesting that an upcoming decline could be considered corrective, as long as it holds above the 100 SMA, now at 112.75. 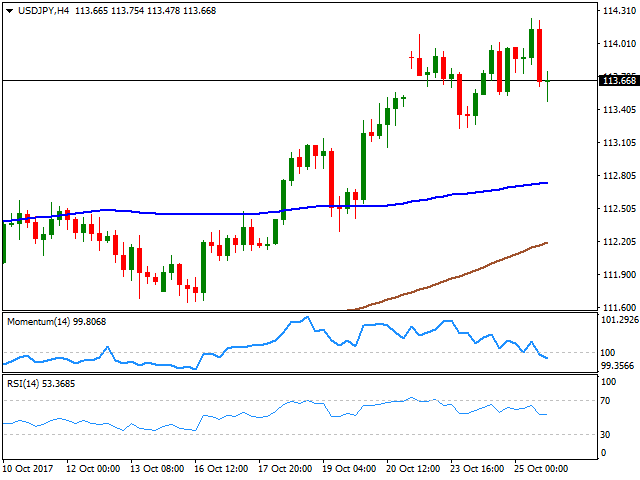 EUR/USD: On the backfoot below 1.0100 amid notable USD demand

EUR/USD is trading on the defensive below 1.0100, as the US dollar extends the previous rally amid risk-aversion. Fears of German recession, geopolitical concerns and hawkish Fedspeak weigh on the major currency pair.

GBP/USD is off the lows but remains vulnerable near 1.1900 amid mixed UK Retail Sales and broad USD strength. The UK Retail Sales surprised positively, with a 0.3% rise MoM in July. On an annualized basis, UK consumer spending fell 3.4% vs. 3.3% expected.