Canada’s excellent August payroll report and a modest gain in crude oil prices could not compete with the inflation inspired rise in US Treasury rates, which propelled the USD/CAD to its highest close in three weeks on Friday.

Employers in Canada added 90,200 workers in August, the third expansion in a row after losses in April and May. West Texas Intermediate (WTI) finished the week at $69.44, its best conclusion in seven sessions and just under the important resistance at $70.00. The Ivey Purchasing Managers Index (PMI) for August also was unexpectedly buoyant at 66. 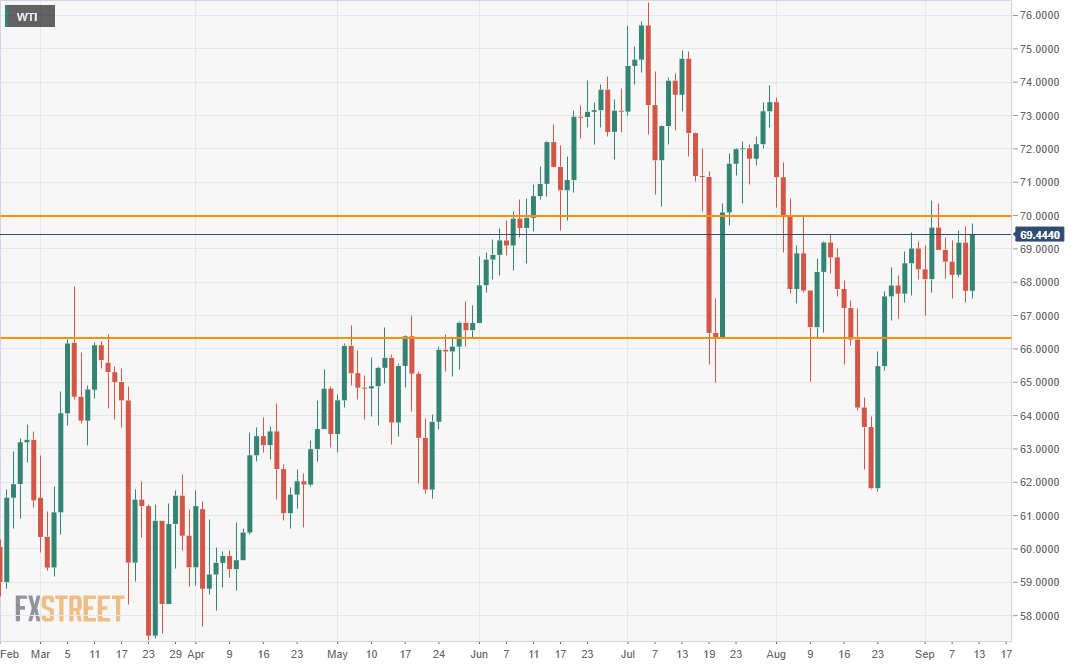 The Bank of Canada status-quo decision on Wednesday, though expected, was another checked box on the way to the US Federal Reserve’s rate meeting on September 21-22.

Despite these positive economic indicators, it was the US Producer Price Index (PPI) for August at 8.3% (YoY), prompting the 10-year Treasury yield to add 2 basis points on the day and 5 on last Friday’s close, that impressed the markets and supplemented the greenback’s gains from earlier in the week.

The main upward move for the USD/CAD had come on Tuesday when the pair crossed resistance at 1.2550 that had been the bottom and then the top for the previous three sessions and a notable trading marker since early July.

The Canadian economy has recovered 85% of the jobs lost during the 2020 lockdowns with the addition of 90,200 positions in August. West Texas Intermediate (WTI) closed on Friday at its highest point in seven sessions.

That these two main props for the Canadian dollar were insufficient to counter a modest rise in US Treasury rates is an indicator that the initiative in currency markets belongs to the Federal Reserve. The USD/CAD gained 167 points on the week, finishing at 1.2693.

The next policy meeting for the US central bank is September 21-22. In late August, Chair Jerome Powell said it was very likely that a reduction in the $120 billion bond purchase program would begin before the end of the year. An announcement at the September meeting detailing the schedule and amounts was the assumed next step.

August’s woeful Nonfarm Payrolls has made that announcement less likely, but how much the odds have changed is unknown, not least to the Federal Reserve Open Market Committee (FOMC) members themselves.

In the week ahead the US will report CPI and Retail Sales for August and preliminary Consumer Sentiment for September. These statistics will not alter the views voting members will bring to the FOMC discussion. Inflation has been officially discounted as temporary, even if it is looking far more permanent than anticipated. Retail Sales are of less concern than employment.

Canada’s own CPI data for August, due on Wednesday, is not high on market calculations like last week’s Bank of Canada rate decision. It is Fed policy that is determinant.

The Fed’s third set of economic projections will also be released at the September meeting and will provide markets with as much guidance as the FOMC statement and Mr. Powell’s news conference. The prior set in June saw substantial upgrades to GDP and inflation for this year and the first projected fed funds increases (in 2023) since pandemic policies began last March.

An official announcement on tapering is still the market assumption and will continue to be the chief supporting factor for the USD/CAD. This gives the pair mild upward bias for the week. Higher than expected US inflation and stronger Retail Sales will add to that tendency.

Markets have been dominated by central bank activity since the pandemic began. That is not going to change in the run-up to the Fed’s next meeting.

The MACD (Moving Average Convergence Divergence) turned slighty positive on Friday with the USD/CAD successful at sustaining the week's gains despite improving Canadian data. The Relative Strength Index (RSI) is also a buy near its best level of the month. Perhaps the most buoyant of the three is True Range with Friday's increase giving the index at its best level since August 24. None of these momentum indexes point dramatically higher, but the combination is a firm base for the USD/CAD.

All four moving averages (MA) are below the market with three offering realistic support lines. Resistance lines are scarcer and less substantial than the support structure. These conditions provide the basis for the USD/CAD to move upward despite the lack of a conclusive trend.

The FXStreet Forecast Poll discounts the potential for the impact of a Federal Reserve taper announcement.