American consumers should be happy. Jobs are plentiful, wages are rising, the pandemic is wanin, and for the unemployed federal supplementary benefits have been extended to September.

Retail Sales in the first quarter demonstrated an abundant willingness to spend.

Yet there are disquieting conditions too.

Annual US inflation has tripled since January. Parts and labor shortages are making some goods scarce, gasoline prices are nearly 50% higher in six months and the uncertainty created by the pandemic, which is unquelled in much of the world, lingers in school closures and social restrictions in many places. .

The Michigan Consumer Sentiment Index is expected to rise to 90.4 in May, which would be the third pandemic high in a row, following 84.9 in March and 88.3 in April. Sentiment was 101 last February before the government ordered lockdowns struck the economy in March and April

There were a record 8.123 million jobs available in March, far more than the 7.5 million anticipated and a sharp increase from the 7.526 million open in February, as reported in Tuesday’s Job Openings and Labor Turnover survey (JOLTS) from the US Labor Department.

Despite the largest number of unfilled positions in the 21 years of the JOLTS survey, a number that likely increased in April, that month’s seasonally adjusted  Nonfarm Payrolls (NFP) added only 266,000 workers, barely a quarter of the one million expected. The unadjusted figures showed 1.089 million new hires.

This number of job vacancies is consistent with an economy that expanded at 6.4% in the first quarter and that the Atlanta Fed estimates has accelerated to 11% in second.

Several factors may be behind the reluctance of workers to resume employment including, remaining fears over the virus, child-care responsibilities in the states and cities that have not opened their schools and jobless benefits that for some may be as much or more than they could earn.

Initial Jobless Claims dropped to a new pandemic low of 473,000 in the May 7 week as the end of most business restrictions left companies scrambling to fill roles left vacant during the pandemic.

Wages are also rising as firms bid for scarce workers. Annual Hourly Wages climbed 0.7% in April after falling 0.1% in March, no change had been expected. Annual wages rose 0.3%, they had been forecast to decline 0.4%, following March’s 4.2% gain.

Sales averaged 4.8% a month in the first quarter, the strongest consumer performance in over two decades. Washington stimulus payments of $600 in January and $1400 in March provided the wherewithal for the large boost in consumption, but the active job market gave consumers the confidence to spend the largess.

April Retail Sales, released on Friday, are expected to rise 1% after the March burst of 9.8%.

The Consumer Price Index (CPI) has tripled in four months from 1.4% annually in January to 4.2% in April.  That is the highest yearly rate in 13 years.

Gasoline, that essential ingredient for the dispersed US population, rose above $3 a gallon on a nationwide average for the first time in seven years in May. Prices for a gallon of gas have jumped 32% this year and 41% since last November 9.

Part of the overall inflation surge this year is due to the comparison with last April’s index, which had plunged in the lockdown spending collapse. But that is not the sole reason behind the galloping price increases.

Commodity and raw material prices have gone up sharply with production unable to meet the demand in many cases. The Bloomberg Commodity Index (BCOM) has gained 17.5% this year, with the steepest gain in the past month as US and global manufacturing firms have sought to ramp up output to meet consumer demand. 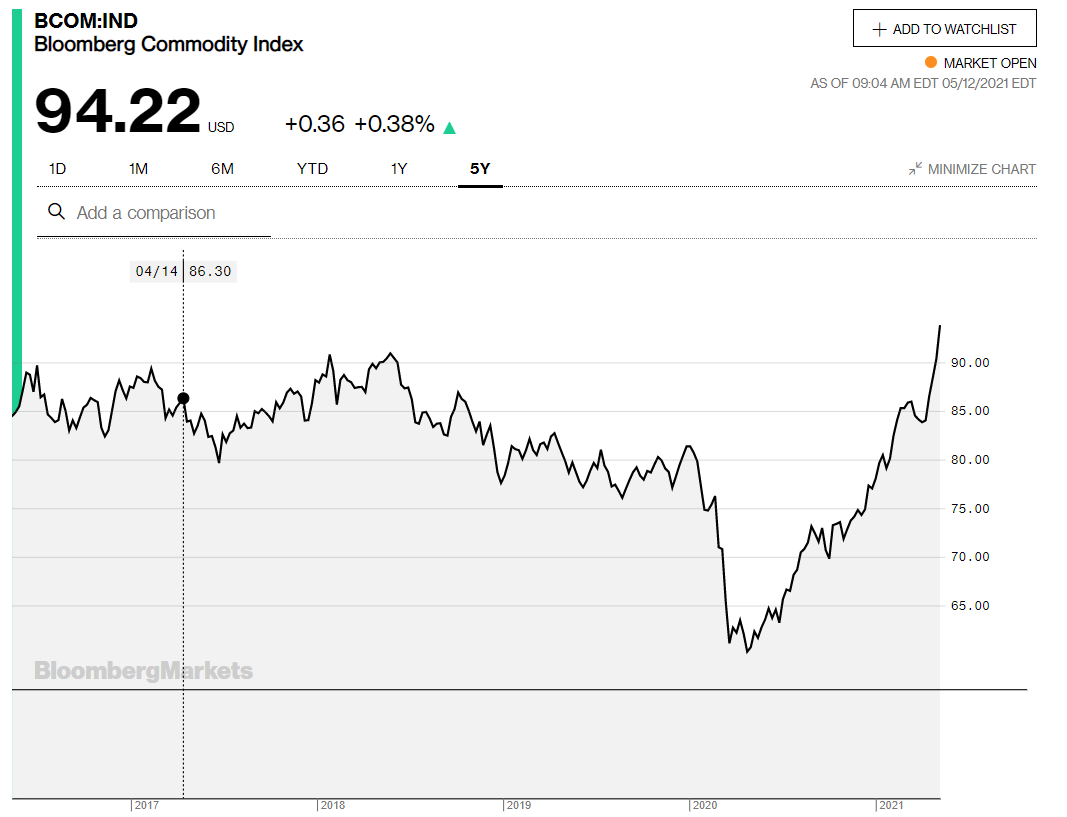 Price pressures earlier in the production process remain intense, promising that rising manufacturing costs will be passed on to retailers.

The Federal Reserve contention that the current price increases are a temporary phenomenon has merit, and the annual gains will drop back once last year’s trough in the index is passed. Likewise the resource and component shortages will pass as the global economy normalizes but even when they do prices are very unlikely to return to the pre-pandemic levels.

For the consumer, looking at a year or more of elevated and rising prices, the derivation is moot.

Inflation is a tax on income and if it persists, it will sap the consumer spending essential to a successful US recovery.

Markets are focused on inflation, if consumer sentiment is lackluster, the dollar and equities will take the hit.