The outlook of US consumers should be little changed in August as jobs and inflation compete with Covid cases for the attention of vacationing Americans.

Consumer Sentiment from the University of Michigan is forecast to be 81.2 this month, as it was in July. 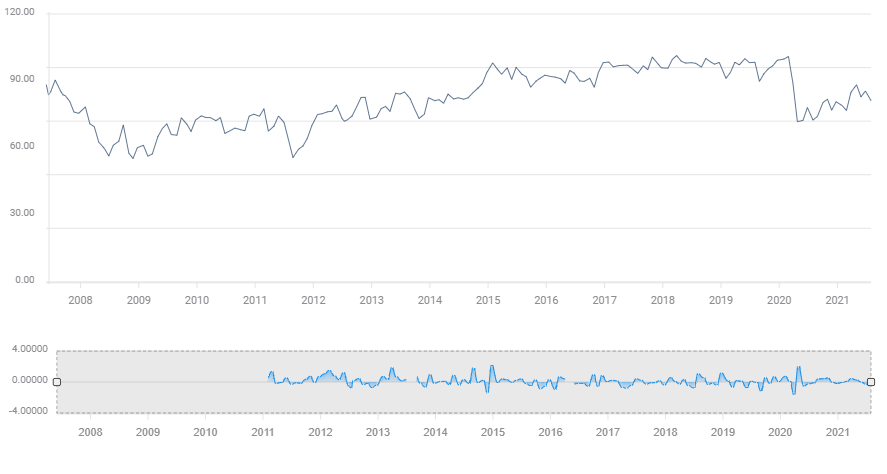 Sentiment collapsed last year as the economy was ordered into lockdown. The Michigan Survey crashed from 101 in February to 71.8 just two months later in the steepest drop on record. Pandemic closures and social restrictions ravaged the economy and led to more than 22 million job losses.

Since then the Consumer Sentiment Index has ranged as high as 88.3 in April and as low as 81.2 in July.

Job creation and rehiring has resumed smartly in the last two months, with an average of 941,000 additions to Nonfarm Payrolls in June and July. That is more than double the 426,000 average in April and May.

The Unemployment Rate (U-3) has dropped from 6% in April to 5.4% in July. The Underemployment Rate (U-6), which includes a wide range of discouraged workers, has plunged 1.2% in four months to 9.2%. These rates are the lowest of the pandemic era. Essentially, anyone who wants to work can find a job.

The increase in Annual Average Annual Earnings has jumped from 0.4% in April to 4% in July.

Initial Jobless claims have hovered just below 400,000 for eight weeks. Despite the rise in Covid-19 cases in many states, further business shutdowns have not been threatened. Some 7 million workers are still thought to be unemployed, voluntarily or not, as a result of the lockdowns.

These labor market developments, promising as some are, have not given consumers an overly sanguine view of the economy.

One reason Americans have not become more optimistic is undoubtedly inflation. Consumer price increases have more than tripled this year, from 1.4% in January to 5.4% in July. The Core CPI rate has jumped from 1.4% to 4.3%. Even the Fed’s preferred gauge, the Core Personal Consumption Expenditure Price Index, PCE for short, has soared from 1.5% in January to 3.5% six months later.

When these gains are compounded with the more than 50% increase in the price of gasoline in the past year, a necessity for the vast majority of Americans, whether included in the Core PCE  measure or not, many families have seen little or no improvement in their standard of living.

Rising infections rates in many states, usually in the unvaccinated portions of the population are another negative development on the public horizon.

Even though hospitalization and fatality rates remain a fraction of what they were in earlier waves of the pandemic, the constant recounting of cases in the media, reminiscent of last year, and the imposition of mask requirements in some cities has an unpleasant aspect.

The new year for public school students begins shortly in most locales. President Biden is mulling whether it is legal for the Federal government to order masks for all students.

Retail Sales for July will be released by the Commerce Department on August 17.  After June’s 0.6% rebound from the 1.7% decline in May, sentiment numbers will give an early indication if consumer spending, 70% of US GDP, is likely to keep the recovery on track. 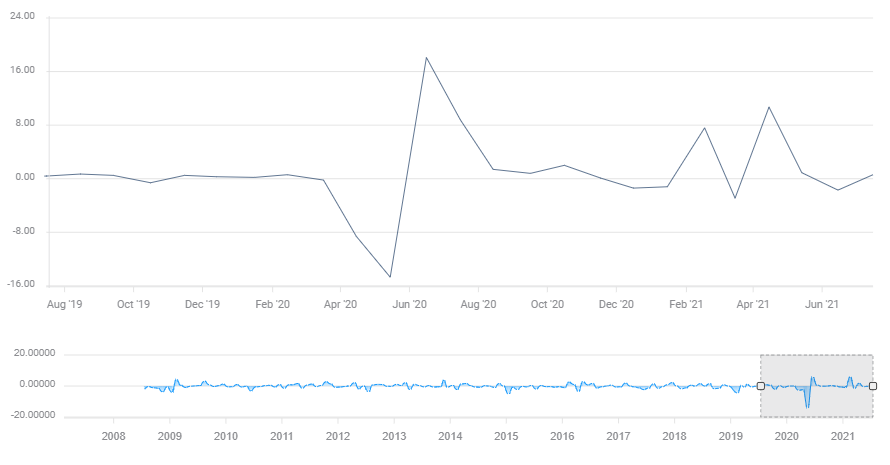 Business investment has remained relatively strong, anticipating a robust run as consumption makes up for delayed and denied purchases. If the consumer is having second thoughts now, businesses will shortly.

Consumer Sentiment is not a market moving statistic. It informs the economic background and is a relatively good indicator for household spending, but markets tend to trade the hard Retail Sales numbers.

The friable nature of the current economic situation, particularly for the consumer, probably gives this sentiment data more potential market impact than normal.

Better than expected figures will support the dollar in the majors currency pairs, except perhaps the loonie, which partakes of the direction of the US economy.

Weaker than forecast results will again bring out the question of the pandemic’s drag on the US economy in general and the consumer specifically.

The US economy cannot prosper if Americans are not willing to spend, and a worried consumer is not first in line at the mall.