American consumer prices, which have already jumped more in the last twelve months than at any time in the last 71 years, are set to take another leap upward.

Core prices are expected to climb to 4.9% annually from 4.6% in October. The monthly increases are predicted to be 0.7% in the headline rate and 0.5% in the core.

Recent results from producer prices, wages, employment and gasoline suggest that the surge in consumer prices is not abating.

The Producer Price Index, which charts material costs for manufacturers, was unchanged at 8.6% year-over-year in October. These are the highest escalations in producer expenses in 13 years. 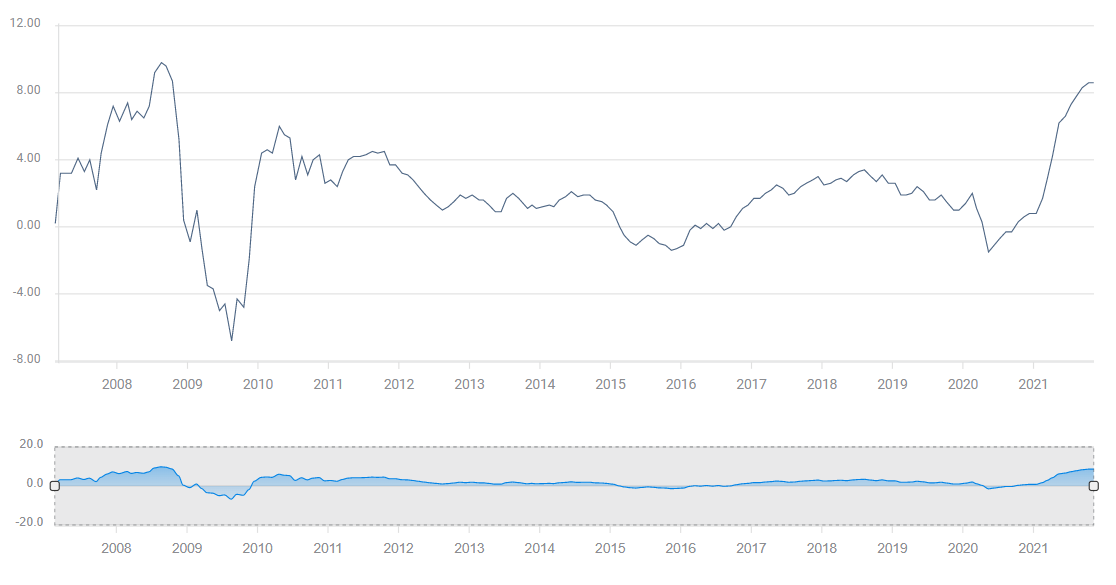 The labor market remains tight. Unemployment dropped unexpectedly to 4.2% in November from 4.6%, 4.5% had been forecast. The underemployment rate dropped to 7.8% from 8.3%. It had been predicted to rise to 8.4%. Unfilled positions in the Job Openings and Labor Turnover survey (JOLTS) rose 595,000 in October to 11.033 million.

Employers have been offering higher wages and signing bonuses in many industries because lack of workers is preventing many firms from full operation. Incoming orders are strong and labor shortages are the one of the main reasons for the scarcity of many consumer products.

Average Hourly Earnings (AHE) were up 4.8% on the year in November, unchanged from October. Wages increases have soared from 0.4% in April. The gains of the past five months are not the result of a statistical base effect from last year. The average rise in annual wages from July to November 2020  was 4.6%. This year's increases have added to high levels of existing gains. Labor shortages will likely bring further wage increases as employers compete for the few available workers. Hiring difficulties are particularly acute in skilled trades required for manufacturing.

Gasoline is the one CPI input that was stable in November. A gallon of regular fuel was $3.39 at the start of the month and $3.38 at the end.

Higher material production costs and rising wages, which firms will quickly pass on to consumers, indicate that the upward pressure on retail prices has not slackened.

Inflation has become the Fed’s new cause celebre. Gone is the transitory and base effect rhetoric so frequent just a few months ago. Chair Jerome Powell and presidents from several regional banks have been quite direct in noting that the time for tighter monetary policy has arrived.

Treasury yields have recovered as the Omicron panic that roiled markets on November 26 has vanished. The 10-year return has climbed 17 basis points to 1.511% after closing at 1.341% that Friday.

The dollar has been relatively stable for the past two weeks as traders wait to see if the Fed’s new inflation concerns will be matched by policy and prediction changes at the December 15 meeting.

Markets anticipate the end date for the bond program will be moved several months closer than its June estimate in November. The final set of economic and rate projections for 2021 are expected to provide at least two 0.25% rate increases in the second half of the year.

The Fed has primed markets for a change of policy at next week’s meeting, consumer prices can only aid the cause.