Inflation’s record spike in the US that has riveted markets, consumers and the Federal Reserve alike over the past six months, should continue as prices are forecast to increase at the fastest rate since February 1982.

The annual Consumer Price Index (CPI) is expected to reach 7.3% in January, after December’s 7.0% gain. One year ago CPI was 1.4%. The monthly increase will be unchanged at 0.5%.

Why this bout of inflation is so worrisome

The US has experienced several instances of sharply higher prices in the past two decades, but none excited the monetary authorities or consumers as this one has. In September 2011 CPI registered 3.8%, in July 2008 it was 5.5%, in September 2005 inflation reached 4.7% and in May 2001 CPI touched 3.6%.

Two differences separate those earlier instances from the past year: duration and rate.

Only the post war 1949 recession, which was deep, fast, and economically similar to the 2020 lockdown crater, has produced anything comparable in the modern era.

The tremendous impact of this inflation on the consumer and the Federal Reserve stems from three factors.

First, these increases come after a generation of price quiescence. For most of the last 30 years CPI has been under 2.5%, for much of the last decade it has been below 2%. This inflation is a shock to most consumers.

Second, many consumer necessities have risen at a much faster pace than overall inflation. Gasoline, essential for the vast majority of American families, is 49.6% higher in a year, energy 29.3%, used cars and trucks 37.8%. Meat, fish, poultry and egg prices rose 12.5% in 2021. Even if food in general rose only 6.5%, less than the overall CPI rate, that is, to be obvious, not an improvement. For many consumers, particularly lower income, these increases are deadly to household budgets. 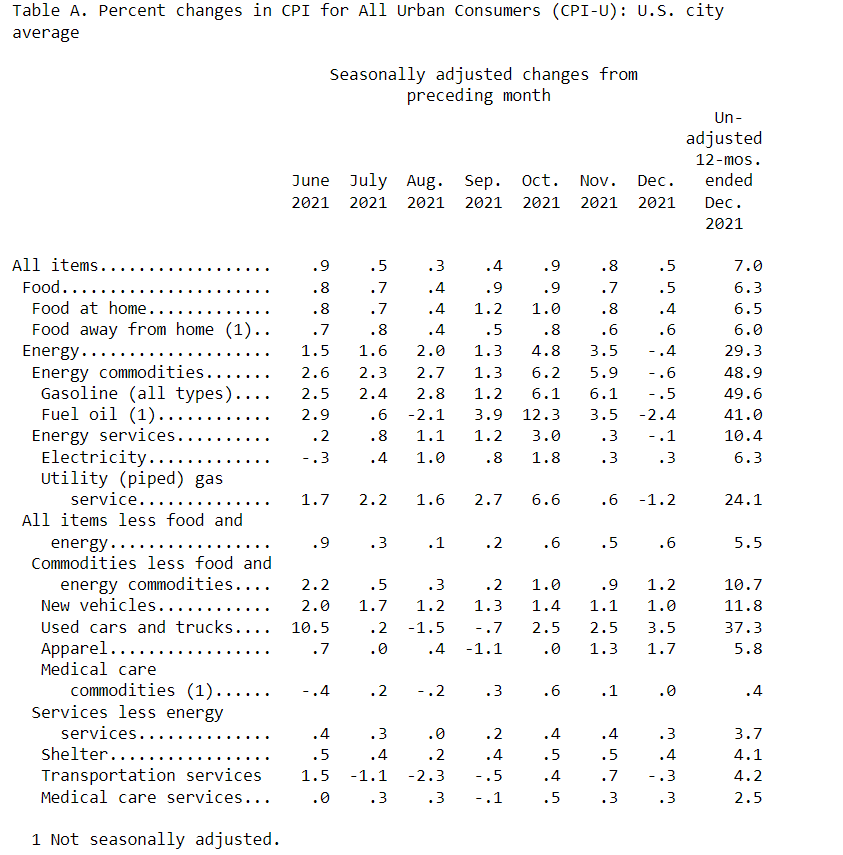 US Bureau of labor Statistics

Third, the five-fold increase in CPI makes wage adjustment impossible. Even with the labor shortages giving workers more bargaining power, wages have not kept pace with inflation. Consumers lost 1.6% in annual purchasing power in December. At the half-year, in June and July 2021, CPI averaged 5.4%. Average Hourly Earnings measured 3.9%, a gap of 1.5%. By December wage increases had gone to 5%, but inflation was 7%. Wages jumped to 5.7% in January, well ahead of the 5.2% forecast and an indication of the pressure on employers.

If January CPI is 7.3% as expected, the gap will have narrowed to 1.6%, but it will be because wages have accelerated. Wage gains will have to be even steeper in the months ahead for workers to regain what they have lost to inflation over the past year.

Prices have been spiraling out of control for 10 months, if wages compete successfully, a reinforcing inflation dynamic will have arisen in a year. Workers demand and receive higher wages to compensate for higher prices, which are then pushed along as manufacturers and retailers raise prices to make up for higher labor and production costs and perhaps add a little fillip for profit margins.

The extent and speed of inflation’s rise explains the Fed’s almost frantic change of policy and move from economic support to restrictions in six months.

For most of the last decade price increases from retailers and manufacturers were restrained by competition. Market share was pressured by lower cost overseas producers.

Most of that inhibition has vanished in the general US inflation, cost increases are passed directly and immediately to the consumer.

Retail Sales had a terrible fourth quarter. Overall sales rose just 0.1%. Did the higher prices for necessities restrict overall purchases or was last year just a poor season which will be redeemed by January spending? Retail Sales are forecast to rise 1.7% in January. If they do not then inflation may be one of the culprits?

Wage increases have tripled in nine months, from 1.9% annually in May to 5.7% in January.  Employers are paying more because it is necessary. With more than 10.5 million positions vacant for the last six months, and job departures at record levels, the upward pressure on wages is not diminishing.

The Personal Consumption Expenditure Price Index (PCE), the Fed’s preferred measure of inflation, was 5.8% for the headline rate and 4.9% for core in December. These gauges are up from 1.4% and 1.5% last January.

Consumer inflation expectations doubled in 2021. From 3% in January, the one-year ahead expected inflation rate from the New York Fed had climbed to 6% in November.

Inflation indicators are pointing higher. In the shorter term inflation expectations will drive salary demands and the compensation side of a wage-price spiral. The deeper concern is that rising prices will inhibit consumer spending because wages cannot keep up with inflation. Falling consumption in a fragile recovery could precipitate an economic slowdown or recession. A recession would halt and reverse inflation, but would entail huge unknown risks in the current economic environment.

Market indicators and the Fed

The Chicago Board Options Exchange (CBOE) FedWatch estimate, based on the fed funds futures, has the odds for a 0.25% rate hike at the March 16 Fed meeting at 75%.

By the December 14 meeting the futures estimate there is a 81.7% chance of four rate increases and a 52% guess for five hikes. 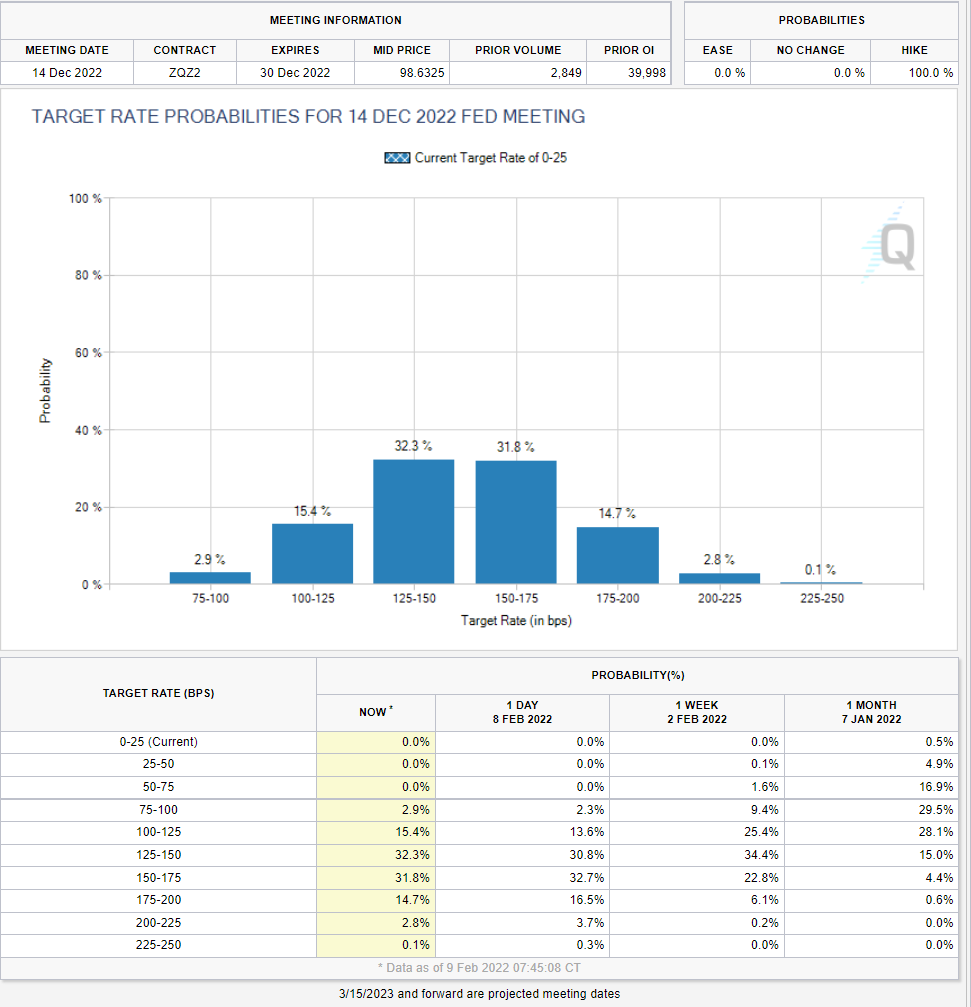 The Fed’s own projections released in December listed three rate hikes this year. A new set of economic and rate estimates will be issued at the March 16 Federal Open Market Committee (FOMC) meeting.

The bond purchase program will end in March. There are two open questions for that meeting. Will the governors elect a 0.5% fed funds increase? As above the futures are not convinced.  What of the balance sheet? Fed Chair Jerome Powell has said several times the reduction of the bank's nearly $9 trillion balance sheet will not start until the bond program is terminated. Until recently that was expected to mean sometime after March. If the Fed wanted to send a strong signal of its seriousness it could begin a passive roll-off of maturing bonds next month. Is that likely? That unexpected development would send Treasury, commercial rates and the dollar scurrying higher. The Powell Fed, like its two predecessors, prefers to keep the markets informed of its intentions. The Fed can deal in the unexpected, witness its March 2020 actions, but current inflation, however aggravating, is not a crisis.

The FOMC will have to weigh the economic risk against the benefits of undermining the incipient and developing inflation psychology in the market and with consumers.

The rapid ascent of consumer inflation has become the central economic focus but the concerns of the individual markets are different.

Equities and credit are estimating how quickly and how far the US interest rates will rise and how much, if any, higher rates will damage first half economic growth.

Currencies are judging where the differential advantage will lie, as most other central banks, except the Bank of Japan, are raising rates or considering doing so.

At the moment, stocks and bond traders seem to believe that any prospective hikes this year will not deter the economic recovery.

For currencies, the dollar’s rise in the last six months has already incorporated the Fed’s new inflation and rate policies. Further dollar gains will depend on inflation and the Fed’s response.

Immediate moderation in US CPI will not reduce interest rate expectations because, in the standard terminology, the Fed is behind the curve of rising prices.

For the first half of the year at least Fed policy is set. Whatever inflation does from now to June expect the FOMC to follow its guidelines and markets to follow the Fed.

EUR/USD dribbles around a two-week low as oversold RSI conditions challenge further downside during Thursday’s inactive Asian session. That said, the major currency pair takes rounds to 1.0450-40 at the latest.