The labor market debacle has reached into American households prompting the greatest unease since the recovery from the financial crisis recession.

Consumer confidence from the Conference Board is expected to fall 40 points in April its largest one month decline in the series history. The plunge to 80 from 120 in March comes as 26.4 million people have lost their jobs in the last five weeks, 16% of the labor force, idling an unknown portion of the US economy.  Another 3.5 million people are expected to file for jobless benefits this week, bringing the total in six weeks 30 million.

Payrolls shed 701,000 jobs in March and the accounting for April is projected to be several times worse when it is reported on May 8.

The economy is forecast to shrink 4% in the first quarter despite having been expanding at a 2.7% rate before state governments ordered most commercial activity closed in an effort to prevent the spread of the Coronavirus.  The Bureau of Economic Analysis’ GDP figures are issued this Wednesday at 8:30 am EDT.

Michigan consumer sentiment for April was revised to 71.8 from 71, better than the 68 meidan estimate but stil the lowest since December 2011.

Consumption is the lifeblood of the US economy and consumer confidence backed by employment are the key ingredients behind household spending.

Retail sales collapsed 8.7% in March, the largest amount in records back to 1992, and that was before the full impact of the labor crash which began in the third week of March.

Purchases of store based goods saw the largest fall.  Automobile dealerships, the majority of which are closed across the country, sold 25.6% fewer cars, furniture and home furnishings store receipts dropped 26.8% and restaurant and bar bills declined 26.5%.

Food and beverage store purchases rose 25.6% as did the health and personal care group including pharmacies which gained 4.3%.Internet shopping, the Census Bureau’s non-store retailers category, rose 3.1% as many families turned to Amazon and the delivery services at such giants as Walmart for food, staples and other essentials.

Despite the surge in on-line sales the plunge in regular store purchases and near closure of all service establishments from barber shops and beauty parlors to bowling lanes and movie theaters drained far more from the economy than the internet replaced.

Conclusion: Confidence, markets and the dollar

The equity market seems confident that the American consumer will return to form once the shutdowns are lifted and a good portion employment returns, hence its notable recovery since the low of March 23. 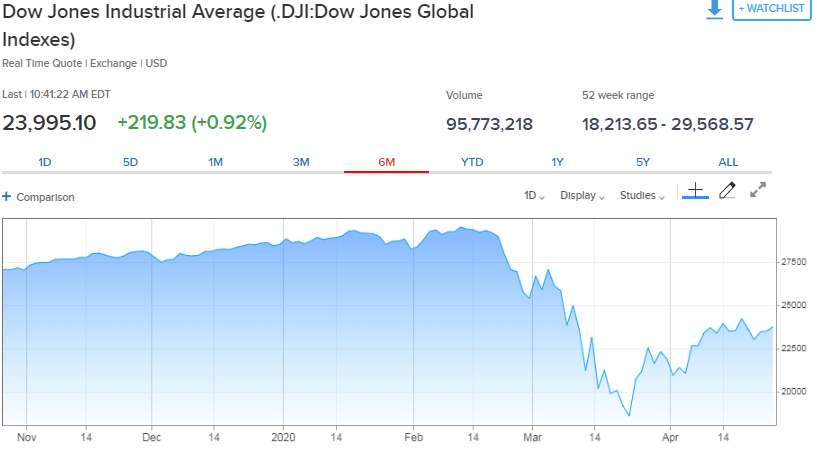 Credit and currency markets are less convinced. Treasury yields remain near their all-time lows with bond prices buoyed by the Federal Reserve’s $500 billion purchased program. The 10-year bond was returning 0.645% as at this writing.  Its record low close was 0.498% on March 9.  The dollar has retained the safety-trade edge acquired as the pandemic panic exploded in March in all the major pairs except the USD/JPY.

With so much riding on the willingness of Americans to resume their normal lives, the attitudes of everyday citizens are as important, if not more so, than the most astute economic predictions. Indeed the markets are almost completely beholden to the optimism of the US consumer.