The toll of the pandemic and the reaction in United States rises each week as unemployment mounts to levels surpassing the Depression yet markets have a seemingly unshakable focus on the incipient recovery. 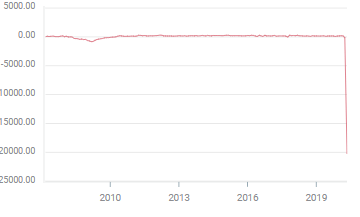 Non-farm payrolls lost 20.5 million people in April and another 8 million are expected to be out of work in May. More than 21 million unemployed are collecting insurance and more than 40 million have filed for benefits in the last 10 weeks.

The economic and labor market disaster that has ensued since the US began shutting down its economy in mid-March as part of the effort to contain the coronavirus is a grim and well-known story.

The speed and intensity of the layoffs and the closure of much of the retail sector has plunged the economy into a contraction that is currently forecast by the Atlanta Fed to be -52.8% annualized from the first to the second quarter.

In the month since the last ADP report on May 6 markets have absorbed the April NFP loss, a jump in the unemployment rate of 10.3%  to 14.7% in a single month, a 16.4% plummet in retail sales, an 11.2% drop industrial production and other record setting  declines in income, personal spending and durable goods orders.

May’s non-farm payroll numbers are expected to be better only in comparison, 8 million vs 20.5 million. The unemployment rate is forecast to rise to 19.6. Initial jobless claims are predicted to add another 1.8 million to those collecting benefits.

Market responses to the pandemic

Yet in all the labor market and economic agony the Dow has added 6% in the past month closing at 25,475.02 on Monday. The S&P and Nasdaq show comparable gains.

The dollar has moved substantially lower against all the majors except the yen, the dollar Index is off 2%,  as the currency markets continue the reversal of the risk-aversion trade that reached its panic height in the last two weeks of March.

Even the price for a barrel of West Texas Intermediate (WTI, Clc1) has improved 40% since the last ADP report regardless of the continuing low levels of projected demand.

Only Treasury yields, with bond prices supported by the Fed’s continuing quantitative easing purchases have drifted down to the lower end of their two month post-Fed intervention range.

The ADP payrolls and NFP figures on Friday for which they are the precursor, will not, for all their dramatic recounting of the disaster, be adding any new information.  Markets have been reading a hitherto unimagined economic collapse into their trading rates for two months.  The early initial claims figures and last month’s NFP report set a standard for surprise that is almost impossible to beat.

When markets trade on information and news the dynamic is between expectation and result, between the forecast and the actual number with the prediction priced into the market. The greater the discrepancy the more likely a market reaction.  Surprise mandates the response not the severity of the economic description.

Given the events of the last two months and that the ADP and NFP numbers will show improvement despite the absolute nature the pain they portray, their economic information is retrograde.

Unless the ADP numbers are considerably better than expected, reinforcing the economic recovery scenario, they will  have marginal trading impact. Disaster is old news already.