This a a deep calendar week, with Europe and the US reporting PMI's today and it just keeps going at a fast pace to Friday, when we get payrolls. Payrolls will almost certainly be a terrible number this time because of the hurricanes, which will also start delivering mortgage delinquencies and other disruptions to the economy. The question is whether the markets will price in a bad payrolls number and take it in stride, or do its usual zigzag on the actual vs. the expected and the actual vs. the historical. 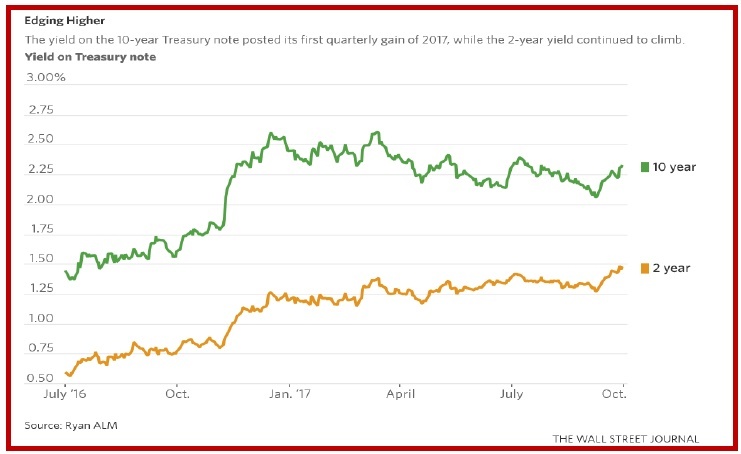 On Friday we thought the dollar would give back some of its gains today and tomorrow before resum-ing its rise, but faith in the reflation trade was bigger than we perceived. Maybe that's because we are looking at data while the market is looking at hope and wishful thinking. The original reflation scenario immediately after the election was based on deregulation, tax reform and infrastructure spending that would goose GDP and employment, and inflation along with it.

When it quickly became clear that Trump and Co. are incompetent, the reflation trade concept faded and the dollar along with it. But last week's relentless talk about tax reform revived the reflation story and lifted yields. See the WSJ chart. The 2-year, supposedly the most sensitive to the Fed, is at the highest since November 2008. You remember 2008, don't you? That's the financial crisis. What are we to make of this recovery?

First, the bond market is willing to believe in a rosier economic picture. The CME reports that on Fri-day, the probability of the third rate hike rose to 78% from 34% the month before.

All of this completely ignores that on Friday, the PCE core inflation was lower at 1.29% and the defla-tor itself at 1.43%. See the chart. Seeing a rise in inflation on this chart is simply delusional.

We must not forget Yellen's use of the word "mysterious" in describing inflation. Even with unem-ployment at under 5%, we are not seeing inflation. And the US does not import enough for the weak dollar to be pushing goods inflation upward, only about 15.5% of GDP. As for the tax cuts driving GDP over 3% for years to come, that's a maybe. Goldman Sachs sees a possible 0.6% added to GDP, but new spending from tax cuts is almost impossible to calculate, especially in the absence of the bracket information. In a word, it's premature to guess that tax cuts will drive GDP substantially higher and inflation along with it. We had GDP rise from the 1% region to the 3% region without getting in-flation. There is no rule in economics that a rise from 3% to (say) 4% would do the job. 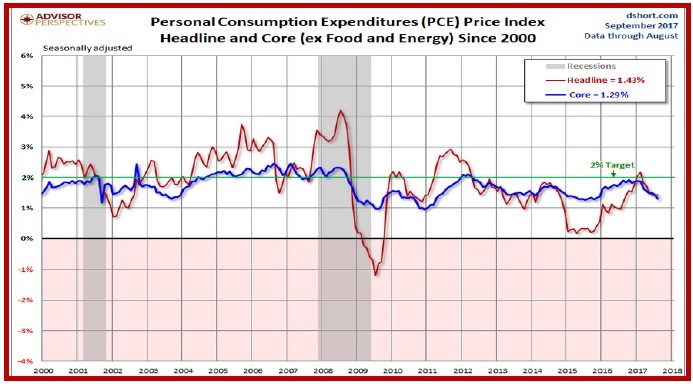 We like a statement from the always perspicacious Jim Vogel at FTN. He says investors should think of rising yields "as a trading process rather than as a long-term economic analysis" by the bond market, quoted in the WSJ.

A quick review of the inflation outlook indicates the bond market can easily become fickle and lose its moxie. Recall that the Fed cut its core PCE inflation forecast to 1.5% this year from 1.7% in June. We don't get close to the Fed 2% target until 2018, when 1.9% is expected. Even that is down from 2% in the earlier forecast.

The Daily Shot from the WSJ has a series of charts from Capital Economics that need no narrative—PCE inflation is weak and core PCE inflation is weaker. One chart shows that housing costs are the only thing holding up PCE inflation. The Trimmed Mean PCE (from the Dallas Fed) is lower. The Fed's "Price Pressures" index is at the lowest level since 2015. "And the probability of inflation being stuck between 0 and 1.5% over the next year is back at 75%." The University of Michigan long-term consumer inflation expectations is up a tad but still depressed relative to historical averages. 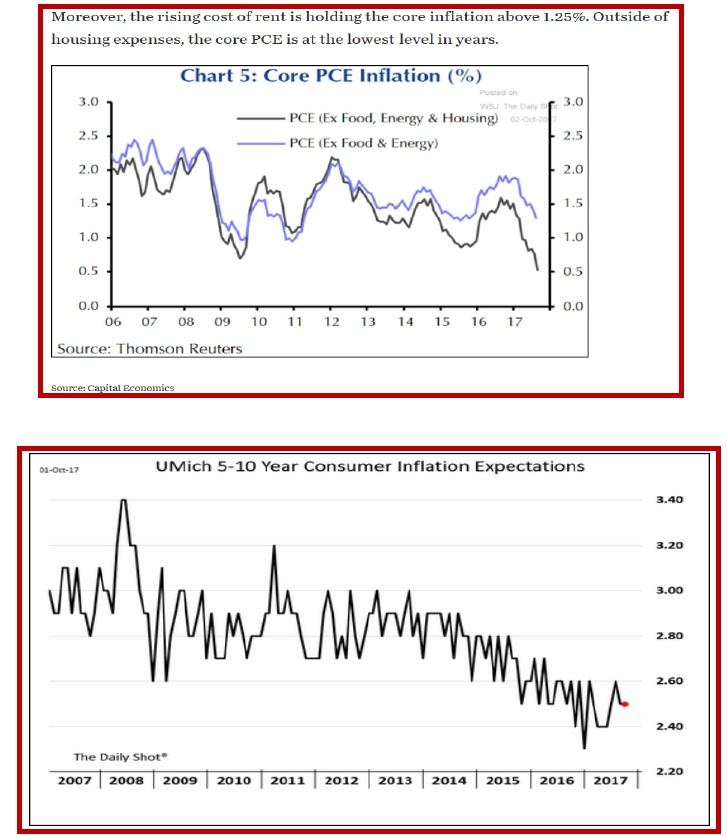 The only remotely favorable inflation chart is the one going back to 1914—inflation volatility has sub-sided to nearly nothing.

This is not to say that the Fed will not hike this year. And this is the week the Fed stops reinvesting in maturing issues. But it is to say that the US is not seeing inflation and unless oil blows up, there is no real prospect of inflation. That leaves the weak—very weak—hope of tax cuts and infrastructure yet to come to do the job. It's the scenario we have but it's not a trustworthy one. In the meanwhile, gather rosebuds while ye may.

US Politics: Corruption in government is universal, but the US usually makes an effort to wipe out and punish the most egregious cases. Given our president has no moral or ethical compass, it was a little surprising that Health and Human Services cabinet chief Price was forced to resign after massive pub-licity about his spending, over $1 million in nine months, on chartered and military flights. Three things: Price was already under a cloud for having traded the stocks of companies he was working with while on a congressional committee. But second, he got axed for globe-trotting instead of working on the Obamacare replacement legislation—actual work—and promoting it in order to get it passed in Congress. Third and most important, Price's expensive gallivanting was getting the front page and in Trump's view, the only government person who deserves the front page is Trump himself. Wags joked that Bannon was a dead duck the minute he got the cover of a major weekly newsmagazine (Time, in Feb).

Two other cabinet chiefs have also abused the federal budget with private charter flights for private purposes. They will get fired if, and only if, they fail to deliver favorable publicity to the president, who thinks government is a TV show and bad publicity lowers his ratings.

As for the ratings race, Trump is losing to football players (although they are wisely retreating now) and to the mayor of San Juan, who castigated Trump for sitting in luxury in a golf club while people die. The federal response to the hurricane in Puerto Rico is judged by some to be excellent, by others to be adequate and by others to be an insult to brown people. We watched "news" all weekend and felt all of it was so biased that nobody can really judge.