Commodities backed by the Yuan image from a Tweet 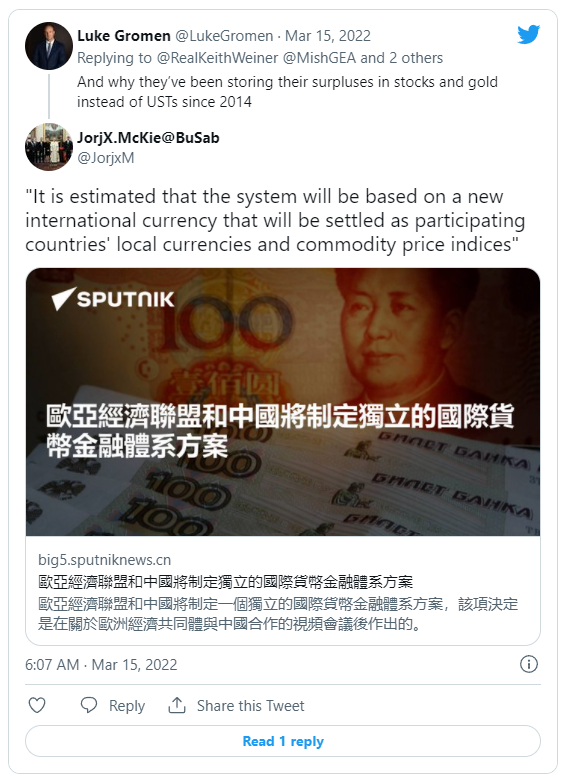 Let's not confuse a diminishing role for the US dollar with it's demise as the global reserve currency.

I Side with Pettis 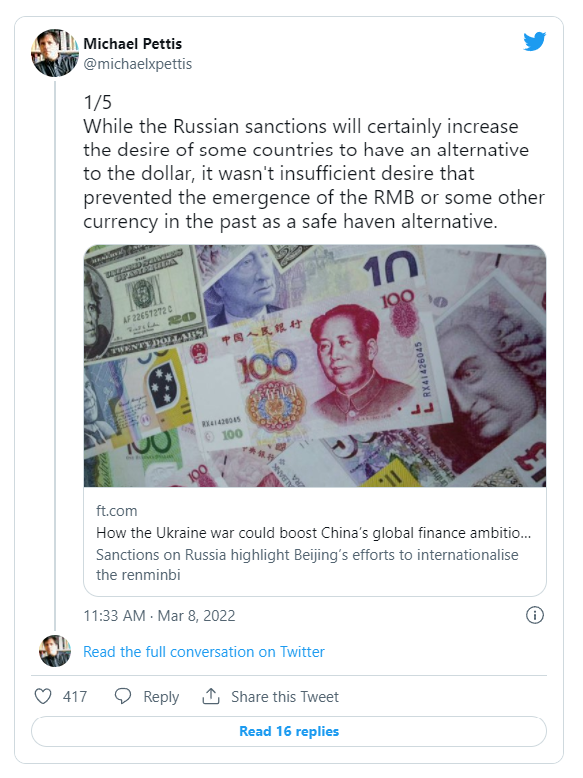 The discussion is the same as it has been for years. 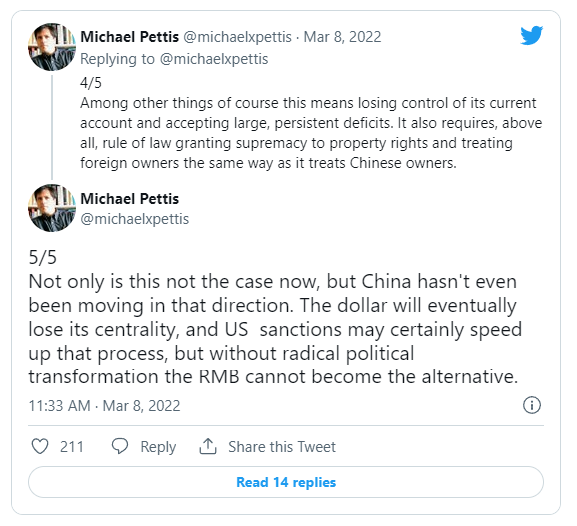 "China isn't moving in that direction."

It's very difficult to say everything that needs to be said about reserve currencies in a Tweet without chain numbering 15 or more.

What Would It Take for the Yuan to Dethrone the Dollar?

The irony regarding point one is the Yuan is pegged to the dollar!

How many requirements does the Eurozone meet?

Germany and the trade surplus countries in general will not easily or willingly give up on points 6 and 7.

Arguably, the biggest holdup against the Euro is lack of a unified bond market.

Individual euro-denominated countries have sovereign bonds but they trade at different rates due to different risks.

There is no single eurobond to speak of.

There are no alternatives. To be a legitimate alternative, a county has to meet the above 8 conditions.

This is why talk of the yuan replacing the dollar is complete silliness.

I repeat these conditions every now and again. Those were clipped from my June 29, 2020 post What Would It Take to Dethrone the Dollar?

"It is estimated that the system will be based on a new international currency that will be settled as participating countries' local currencies and commodity price indices."

Lost in the debate is the simple fact that no county even wants to have the global reserve currency.

Regarding point one, please think of China, Germany, and Japan.

Heck, every country in the world wants to be export giants like Germany and China.

Of course, that is mathematically impossible.

It's important to understand that the US is the global consumer of choice because of reserve currency status.

Countries export to the US and accumulate foreign dollar reserves as a result.

The question at hand is not reserve currency status, but rather what foreign countries do with their reserves. 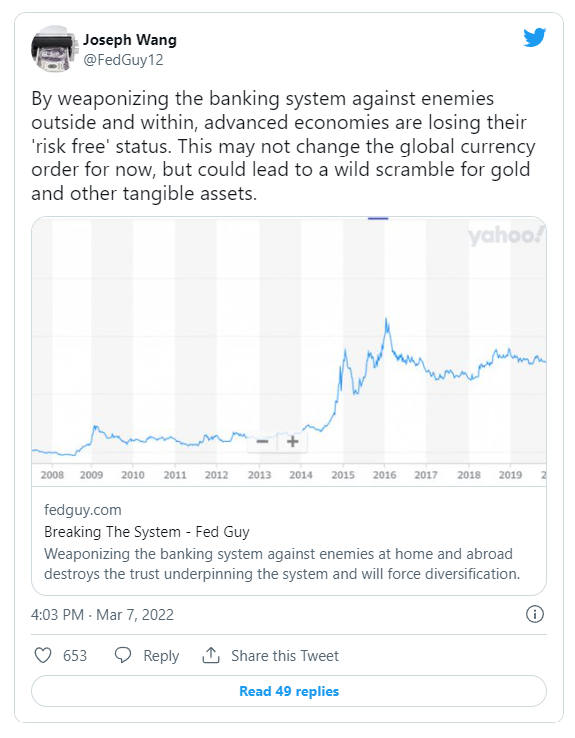 The Fed, likely under pressure from Biden, confiscated Russia's dollar reserves after it invaded Ukraine.

I discussed the implications on March 9, in Unprecedented Fed Action May Have Just Started a Global Currency Crisis

The Fed has no authority to confiscate reserves. This was an illegal action, and there are implications.

The key implication is that people better think twice about fiat reserves than can be taken at will.

Yet, that still does not imply another currency supplanting the dollar.

Currency Based on Commodities Solves Nothing

Q: How does a "currency" based on commodities solve anything?
A: It doesn't.

Holding physical commodities, especially gold, is the only way to guarantee what you have will not be taken.

Thus, there are other major implications for what the US did.

Recall Trump's ban on Hauwei 5G technology and chips to support it.

The US lost out on chip sales and android phones sales. China is now making chips and phones and supplying Russia.

Actions by Trump and Biden will accelerate a move to re-think holding dollars, even if no dollar replacement reserve currency is remotely in sight.

For further discussion, please see A BRIC House and an International Dollar Default by the United States

If you think about the implications of what I just stated, there is a 4-letter word that is the likely beneficiary.

Here's a hint: It begins with letter "G".