In the previous edition of the Market Overview, we analyzed briefly the consequences of Brexit vote. We stated that “the most important economic effect of the Brexit vote is so far a significant rise in uncertainty”.It applies particularly to the political future of Great Britain (Will the UK disintegrate? Will the UK really exit from the EU? When and how will it happen?) and the European Union (Will the EU break apart?). However, Brexit could also hurt the U.S. economy. This is why we would like to focus on the impact of Brexit on the U.S. economy and the gold market.

The rise in risk-aversion and any fall in the global stock market will hit consumer and business sentiment in the U.S., and depress consumer spending and business investment. Therefore, the U.S. economic growth would be expected to fall, but the impact should not be substantial. Both the Bank of America and Economist Intelligence Unit cut their forecasts for the U.S. growth rate in 2016 by 0.2 percentage points. It seems a minor reduction, but investors should remember that the pace of growth is already anemic. And Brexit is another in a long string of headwinds which America faces. Although the British referendum did not trigger a “Lehman moment” in the U.S. financial markets (the market did not freeze and the negative effects on prices were less significant), the risk of recession over the next 12 months rose after the Brexit vote. According to the Deutsche Bank, there is 60-percent probability that the U.S. will enter a recession the next year; however other estimates are much lower. The slower pace of economic growth and higher odds of recession should support the price of Gold.

Many American firms operate in the UK as they consider it as the gateway to free trade with the EU. Actually, the U.S. is the largest single investor in the UK. Therefore, the Brexit would jeopardize their business and investments, and reduce their revenue. Worse corporate results would intensify negative sentiment in financial markets. It sounds positive for the gold market.

The uncertainty induced by the Brexit vote led to the flight to safety, and to lower yields of government bonds and the appreciation of the U.S. dollar. The stronger greenback would also hit some companies, exacerbating profit recession, and deter the Fed from hiking. The rise in the U.S. dollar should be theoretically negative for the shiny metal; however gold rallied simultaneously with the greenback, as one can see below. 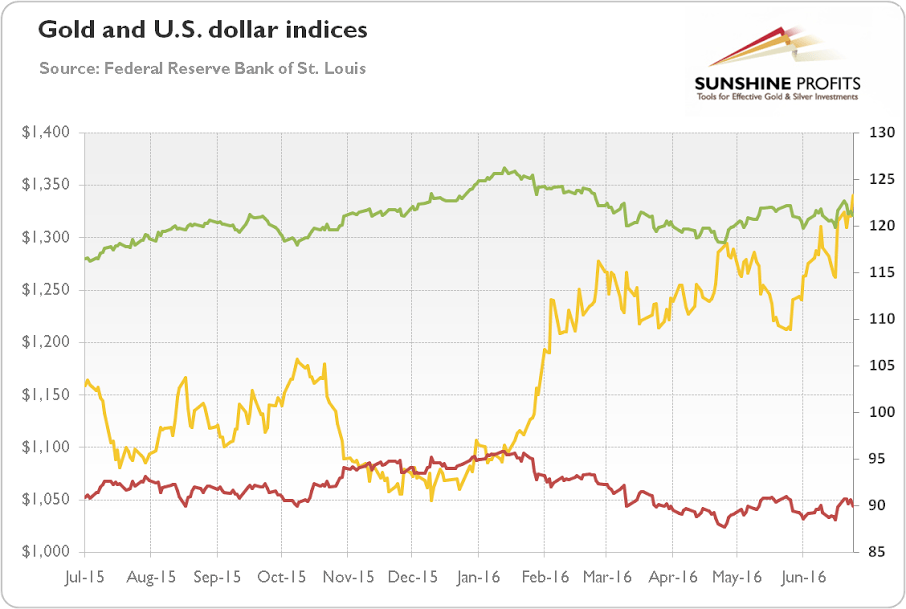 The chart shows two things. First, in the time of global turmoil the price of gold may rise together with the U.S. dollar, as both are considered safe havens against European or global risks. Second, it demonstrates that gold has indeed acted strongly in light of the Brexit voting – it ignored the U.S. appreciation (as well as the rebound in the stock market from the post-Brexit levels). Actually, gold shrugged off much good economic news in the past several weeks, including a surprisingly strong June jobs report. It may be a signal that gold is in the early stages of a bull run, but there are many other factors that have to be assessed to determine that.

The Fed is not likely to hike interest rates in the near future. July is gone. The September move seems to be off the table (as of July 25, the market odds are about 15 percent), as it still may be too early to fully investigate the effects of Brexit and too close to the U.S. elections. The Fed is also expected to refrain from hiking during its November meeting, which is just six days before the U.S. elections. December remains the only option (but as of July 25 the market odds of a hike at the end of the year are about 45 percent), unless there came to be financial turmoil after the US election. In fact, some investors expect a rate cut this year.The Fed’s likely inactionshould undermine its credibility and support the price of gold (naturally, to the extent that it surprises the investors).

Last but not least, Brexit may give Donald Trump a boost. The outcome of the British referendum signals the high level of global economic anger against the elites and strong fear over the impact of immigration – the two main drivers of Trump’s political success. Actually, his chances increased after the Brexit vote according to RealClear Politics’ polls. Investors should be aware that his rhetoric is very similar to one used in the “Leave” campaign, so the polls may underestimate the support for him, as it was in case of British referendum. The rise in the likelihood of Trump becoming the president should be positive for the gold market.

The bottom line is that Brexit can affect not only the UK and the EU, but also the US, which is crucial for the gold market, as the shiny metal tends to respond stronger to U.S. developments. Although the trade with the U.K amounts to less than 1 percent of the U.S. GDP, Brexit could affect the American economy and politics in other ways. The two key channels are the appreciation of the greenback, and the rise in uncertainty and stock market volatility. The latter is clearly positive for the yellow metal, while the former has been no longer a drag on the gold rally in the past several weeks. The reasons behind the break-up of negative correlation between the shiny metal and the U.S. dollar are: 1) the flatter expected path of the federal funds rate and 2) the bullish sentiment towards gold. Although gold seems to be shrugging off any good news recently, investors should be aware that fears about Brexit’s consequences may be a bit overblown, so gold could lose its momentum. However, looking at European banks, we see more downside than upside risks connected with the Brexit vote and thus more benefits than threats for the price of gold (based on Brexit alone, that is).

Dovish RBA Minutes and coronavirus concerns of economic growth weighed on the Aussie. Westpac Leading Index coming up next.