How good was 2019 for the precious metals market? It definitely brought quite some excitement to the arena. In today's article, you'll learn more about the most important gold price drivers in 2019. This analysis will help you better understand the gold market, and draw the right investment conclusions for 2020.

Another year has passed! And we gave another accurate prediction. In the January 2019 edition of the Market Overview, we wrote:

All these factors make us to believe that 2019 fundamental outlook for the gold market is better than one year ago (...) Hence, we should see better price performance next year.

Fast forward to January 2020 – we line now in the twenties! – it turned out that we were right again. Just look at the chart below, which paints the gold prices over the last year. The yellow metal entered 2019 quoted at $1279, and finished the year at $1474 (as of December 18). 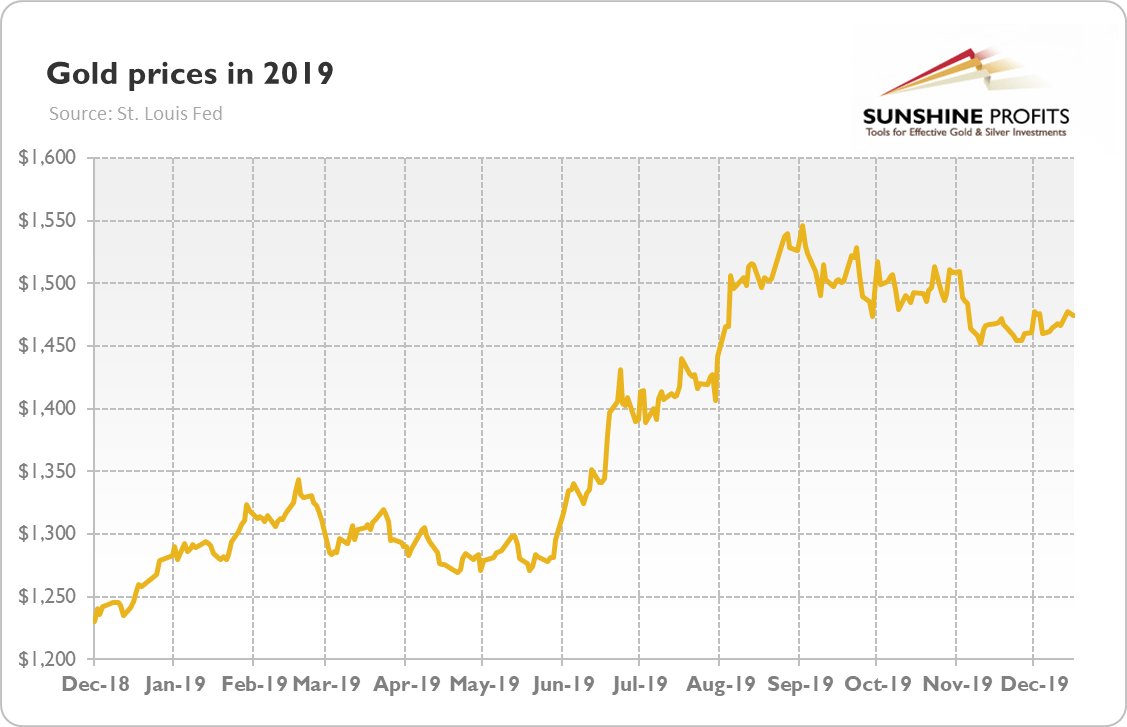 So, gold rose more than 15 percent last year (as of December 20), which was perfectly in line with my fundamental expectations! I did not expect a massive rally ("we are not saying that bullion will start to rally. What we are saying is that fundamental factors should become (...) more friendly toward gold"). And indeed, a 15-percent jump is impressive, but the yellow metal did not enter the full-blown bull market. Nevertheless, 2019 was definitely better for gold prices than 2018, when the yellow metal dropped slightly.

We can distinguish four phases in the gold market in 2019:

What were the drivers behind gold's behavior during these phases? One important factor was the monetary policy. Gold started to go up at the very end of November 2018, when Powell delivered speech considered as dovish. But the February minutes were perceived as more hawkish than expected, which sent gold prices down. Moreover, the ECB adopted a more dovish stance later, which strengthened the U.S. dollar, while weakening both the euro and gold.

However, in May, the yield curve has become even more inverted, which triggered recessionary fears and pushed investors to expect a more dovish actions from the Fed. And indeed, the U.S. central bank started to signal more accommodative stance and even cut the federal funds rate three times. But precious metals investors bought the rumor and sold the fact, as the price of the yellow metal started to decline since early September, amid the interest rates cuts. They could have also hoped for the lengthy cutting cycle, but the Fed decided to deliver only "mid-cycle adjustment" instead.

Let's not forget about the greenback and the U.S. real interest rates – two of the most important drivers of the gold prices. As one can see in the chart below, the dollar index,which measures the strength of the American currency against its peers, reached a local peak at the end of May, when gold started its rally. 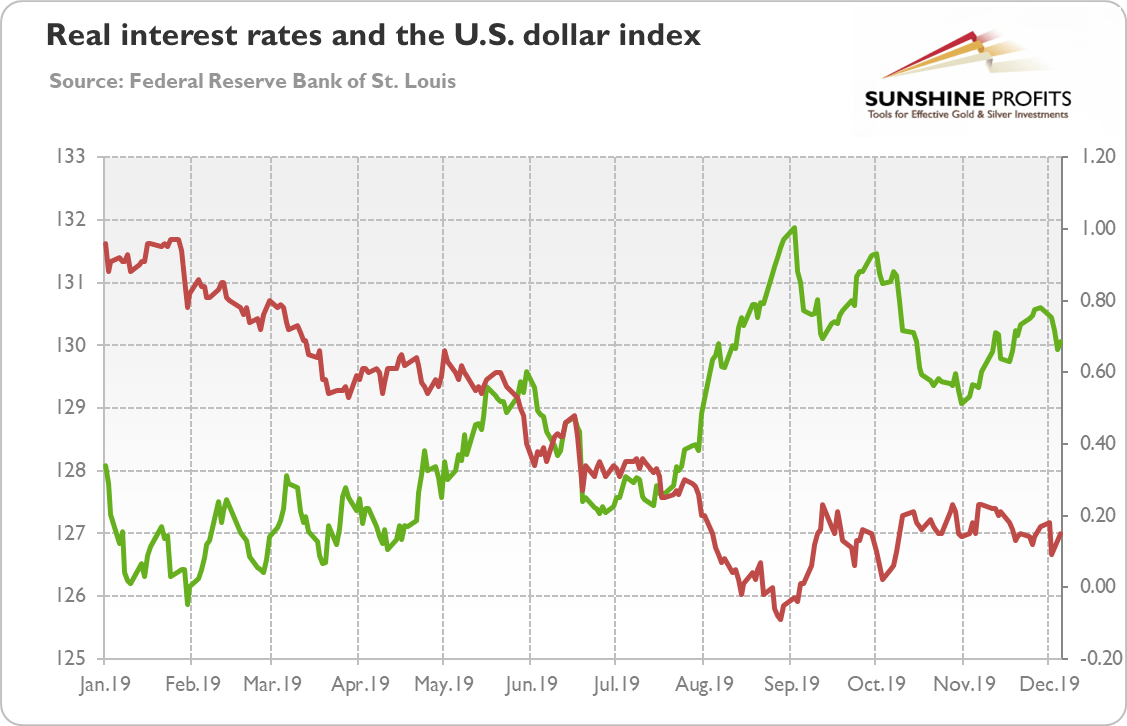 The real yields were also important, as they bottomed out around the beginning of September, when the price of the yellow metal reached its 2019 peak. What is interesting is that gold peaked together with the U.S. dollar, which suggests that both were considered as safe havens during elevated worries about recession. The increase in the interest rates since then pushed gold prices lower, despite the depreciation of the U.S. dollar.

And what about 2020 – will gold soar even more, shifting up a gear, or will it decelerate, after a good year? Well, nobody knows this for sure. But what we know is that – unless the next economic crisis arrives – the U.S. central banks is likely to remain neutral (or to slash interest rates once, according to the CME FedWatch Tool). Given the Fed cut interest rates three times in 2019, it implies that the monetary policy will be less supportive for gold prices. Moreover, the federal deficit is going to increase, which should lift the Treasury yields, putting downward pressure on the yellow metal. Last but not least, the reached "phase one" trade deal and the triumph of Conservatives in the British parliamentary elections mean that the uncertainty over the trade wars and Brexit should diminish.

So, unless anything ugly happens, the macroeconomic environment could be less supportive for gold than in 2019. However, bad things do happen, and, according to Murphy's law, anything that can go wrong will go wrong. Hence, the gold fundamentals may turn out to be more positive for gold over the year. After all, the yield curve has inverted last year and we are already observing some recessionary trends, especially in the manufacturing sector and among the small-sized companies. So, from the fundamental point of view, the first half of the year may be not the best for gold, but we could possibly see an improvement later.