If we look at the homicide rate in Mexico in recent decades we have: 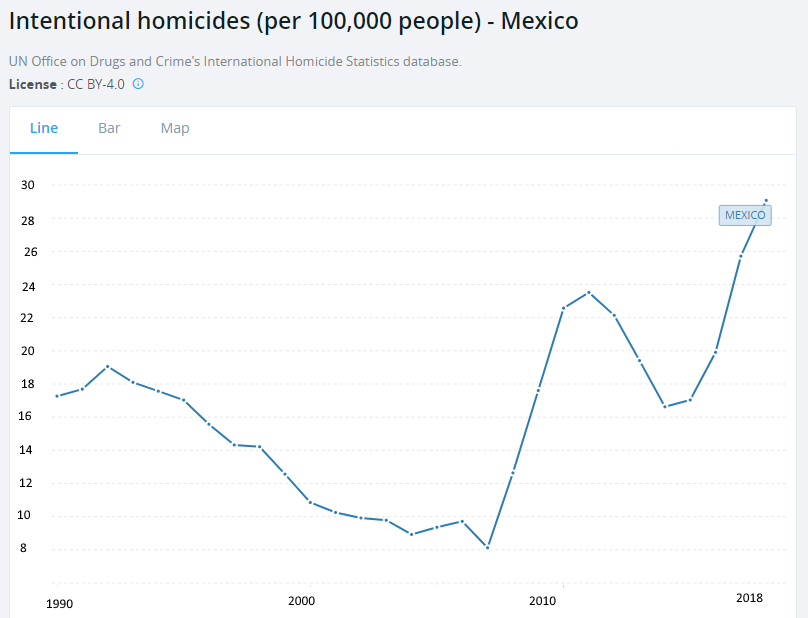 It can be seen that the homicide rate has risen in recent years to about 30 per 100,000 inhabitants; this compares to 5 per 100,000 in the US and 1 per 100,000 in the EU. In comparison to other large countries in Latin America we have a convergence with the homicide rate in Colombia falling and the rate in Venezuela rising – although the figures for the latter may not be reliable due to the collapse of the State there in recent years and the consequent lack of data collection. 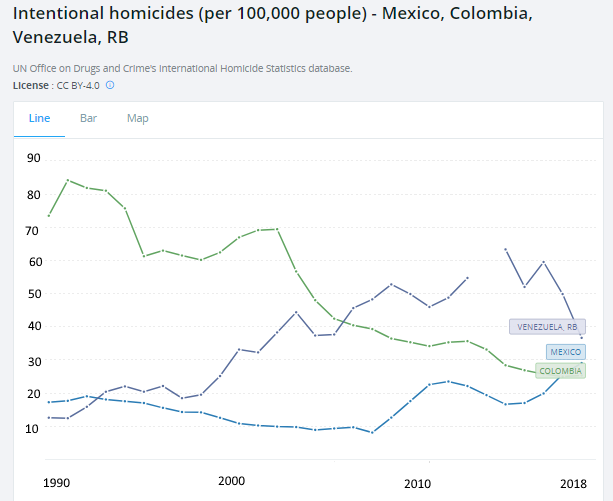 Each country is different and has its own idiosyncrasies but in this article we will concentrate on Mexico. The US plays a major role in the drugs wars to its south as (a) the largest source of demand for illicit narcotics, (b) a major source of small arms for the region due to lax gun purchasing laws there,  (c) during the Central American wars the US often supported actors involved in the drugs trade if they served its purposes in other ways, and (d) diplomatic pressure from the US on these countries to prevent the drugs reaching it’s borders. There is no doubt that if the US were to work with its neighbours to find ways to take the profit motive out of the trade and also to tighten its own gun laws it would go a long way to reducing the violence in those countries. However, the debate in the US on these issues follows its own internal logic and doesn’t take into account the effects its laws have elsewhere.

Mexico as a State is a work in progress. That is, it has still some distance to travel before its institutions and its functioning as a State resembles the modern states of the EU or USA/Canada. Mexico has effectively two economies; there is the modern part with modern industry, retail etc that is similar to, let’s say, Spain. Then there are the “barrios” or vast shanty towns that surround the cities where about half the population lives and where the informal economy rules. Here the State is barely present and this makes it ideal recruiting ground for the drugs gangs where the financial rewards far exceed any other occupation. The rule of law only really applies in the prosperous half of Mexico and in the other half the authorities are too weak to apply the law and the rule of the stronger applies – which is the local Cartel. The State has only in the last decade or so managed to broaden the tax base and to start acquiring the broad outlines of a modern state – previously the public sector relied mostly on oil revenues.

In terms of policing and security there are a number of issues; (a) the police are underfunded and inadequately trained, (b) at the street level many police officers supplement their incomes by acting as informers for the Cartels, (c) the Justice system is wholly inadequate in terms of processing cases, (d) there was until recently no national database for crimes, (e) many higher levels of the police, judiciary and legislature are infiltrated by the Cartels. This makes fighting the drugs war next to impossible in the short term and can only be undertaken over the long term after the reform of the institutions of the State.

So what accounts for the recent surge in violence? One reason is that the drugs business has become more fragmented and territorial and each Cartel seeks to dominate a certain geographical area and expects other Cartels using its territory for transit to pay their dues. This gives rise to numerous turf wars and score settling among the Cartels. The other main reason is the decision by the Federal Government some years ago to pursue the very same Cartels in a show of strength. As explained above the Government is not in a position to win this war until it reforms the very institutions of the State itself and its actions have had more like the effect of upsetting a bees’ nest. Decapitating the Cartels often means that they split and this leads to new turf wars and killings.

The fall in the homicide rate in Colombia was mostly due to the truces agreed with rebel groups such as the FARC which had a political agenda even though they funded themselves through the drugs trade. Venezuela has become a failed state and a transit state for drug smugglers so the rise in the homicide rate there reflects that. In Mexico it would appear that in the short term, paradoxically, the only way to bring down the homicide rate would be for a super-Cartel to emerge to which the others deferred. This would reduce the turf wars and the score settling. In the long term Mexico needs to rebuild its institutions from the ground up and find ways to adequately fund the policing and internal security sectors.