We get the usual Thursday jobless claims today, along with the Philly Fed and Kansas City Feds manufacturing surveys, likely a dip. Existing home sales are also expected to dip from the whopping 9.4% gain in Sept. Leading indicators are not leading during a pandemic and will be ignored or downplayed unless they fit some narrative.

We wrote yesterday that historic levels and professional positioning threaten a further rise in the euro. We seem to be getting it already with the pending US holiday next week a possible factor. We can't identify a shift in risk-on/risk-off that can be blamed or credited with the current minor pullback, implying it may well be short-lived.

The biggest risk-related news of late is the vaccines. Not a quick fix, but a fix all the same, pointing to a robust recovery that will start in Q2 and gain momentum in the second half of next year. The FT has a story today on Big Bank forecasters deepening their gloomy dollar forecasts because the vaccine changes everything—and dominates everything. A Citi analyst thinks the dollar can fall another 20%, for more than the Bloomberg consensus of about 3% for all of next year, taking the euro only to 1.2100.

"The dollar index — a measure of the currency against six peers — has already declined this year, falling more than 4 per cent since the start of 2020, after the Fed wiped out some of the yield advantage US assets had enjoyed over their peers. The euro has gained nearly 6 per cent against the buck since January, while the Australian dollar has marched more than 4 per cent higher."

The Goldman analyst says the dollar should fall as the economy recovers—it is a "barometer of the health of the global economy, falling when growth is buoyant and rising at times of slowdowns." For its part, Morgan Stanley has a 4% drop for the dollar, with some emergings getting room to rise and the euro at 1.25 by end-2021. The Deutsche Bank analyst says ""We are in the perfect environment for a rally in risky assets, a weaker dollar and stronger growth-sensitive currencies through the end of the year."

Countering this view are some skeptics who see worse Covid damage than the dollar bears. The TD Securities guy is dollar bullish going into yearend because "Every single piece of good news has been emphasised [sic] and every single bad reality has been shoved aside." Barclays is worried about the economic damage from a too small or too long-delayed fiscal package.

Sometimes the lasting trend-setter is a single giant factor that overwhelms all other factors, at least most of the time. This is the Big Picture method of overlaying perspective on events. This time it's the Vaccine Theory of Currency Forecasting. It's not a bad idea but it does have one flaw—forecasters, including us, have a tendency to project today's ruling idea too far out into the future. Scenarios intended for a full year can materialize in a few weeks, and then you have to devise a new scenario.

For example, Trump has two months to make a new mess. Brexit. The EU really does pick a fight with its anti-democratic members. Something happens in China. On the vaccine itself: the extreme cold needed for the Pfizer vaccine turns out to be a logistical nightmare and the Army or other distributors fail outright. The vaccine becomes worthless and we may not know it until much, much later. Or too big a proportion of the population refuses to take the vaccine, endangering the herd immunity effect. Or some other hazard arrives out of left field, an unknown unknown, and becomes the dominant Factor. This circles us back to Trump and/or some geopolitical crisis in the South China Sea or some mountain border somewhere. The Middle East tends to be a reliable source of risk aversion.

Bottom line, it's an interesting theory but we need to stay alert to meteors from outer space. One that is all but visible is a new surge in Covid cases in the US that will follow Thanksgiving next Thursday. Canada's Thanksgiving in October led directly to a bump in cases that then took off to the upside. And Canadians are serious maskers and excellent observers of public health admonitions. It closed the border with the US early and just extended it. If Canada can get a surge from its Thanksgiving, it would be foolish not to expect the same thing, and in spades, in the US. 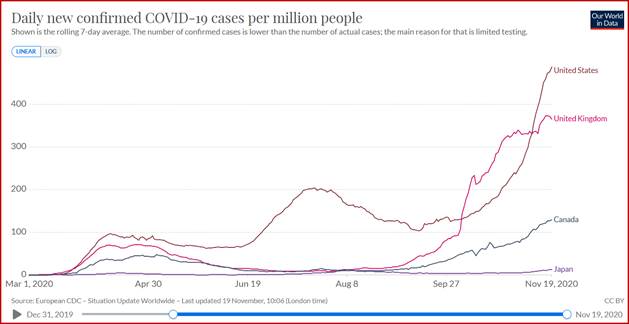 Let's say we get the Thanksgiving surge and then a Christmas surge in the US, resulting in hundreds of thousands of new cases and deaths by mid-January and accompanied by a lousy $500 billion second stimulus or none at all. This puts off the economy-favorable vaccine effect to farther down the calendar and raises risk-off sentiment, which tends to be dollar-favorable. We can never forget that it's the Covid virus in control of our economic destiny. Asians and Europeans get it. Americans and maybe the British do not, or at least without as much respect as it deserves.

This is a developing scenario. We can go along with the doomed dollar for a while on the Vaccine Theory but stay awake to the idea that the vaccine can't fix a new wave once it has begun.

Tidbit: Look at the gold chart in the Chart Package. Channels can be misleading, depending on where you start and stop them, but gold looks like it's going—sideways. This means a breakout at some point. We really like a statement by Jared Dillian in Bloomberg: "Investors don't really have a handle on what gold is or what it represents. Many erroneously believe gold is some sort of inflation hedge, because of our experience in the 1970s. It's also not a hedge against stock market crashes, as we discovered in March. Gold is a hedge on government authorities making poor economic choices. Inflation is usually the result of those poor decisions, but people confuse cause and effect here. Gold is a hedge on policy makers screwing up, and there has been a lot of screwing up in the last 20 years."

Bravo. A little more: gold has risen more than equities over the past 20 years. But consider the starting point in 2000—Fed funds were 6.5% and the country still favored Rubin's "strong dollar, best interests." Then in 2016 we got Trump talking down the dollar to promote exports, plus ultra-loose monetary policy.

"With the benefit of hindsight, the period where we had strong currencies and high interest rates look to be an aberration. There are few times in history when governments can resist the temptations of easy money and loose financial conditions. So, if investing in gold is a bet on authorities doing the wrong thing, the best way to diminish the allure of gold and put the gold speculators out of business is to run balanced budgets. You have to be pretty cynical to root for gold to go up, because it is an explicit bet on things getting worse."

Politics: Trump has lost 27 court cases so far and won one tiny one. The latest is demanding (and paying for) a partial recount in one state, Wisconsin. The state made the Trump campaign pay up front--$3 million. It must have read those stories about Trump stiffing his subcontractors. Judges are sarcastic about the lack of evidence and reasoning in the cases Trump's lawyers are bringing. Rudy Giuliani skated close to getting disbarred by charging "fraud" but then withdrawing the word once in front of the judge. That particular case has been revised three times. Major news outlets say the Giuliani show is an incoherent mess.

One more time—it's impossible for the election to be overturned. The NYT reports Trump wrote directly to the Supreme Court to overturn the Pennsylvania law allowing ballots received after election day to be counted. The Court is sitting on it. "Trump has no other Supreme Court election appeals pending or likely to reach the court before states finalize their results." Pennsylvania expects its count to be certified by Thanksgiving or a day or two later. There are only 10,000 ballots received after election day, anyway, and throwing them out would not only overturn state law but not affect the final outcome. Since the Supreme Court takes cases based on important and pressing legal issues, it can let the Trump request lapse.

On the transition, the woman who runs the General Services Administration persists in refusing to acknowledge the outcome of the election, despite the wording of the mandate that access be given to the "apparent" president-elect. She is breaking the law with the refusal, but there is no punishment attached. The writers of the law never foresaw a jerk like Trump. Another thing Congress has to fix. The list is long.

How damaging is Trump's continued election fraud claims, despite the absence of evidence? A Reuters/Ipsos survey 73% agreed Biden won the election while 5% thought Trump won. But breaking only the Republicans, 52% said that Trump "rightfully won," while only 29% said that Biden had rightfully won.

Here's the lasting problem: "Altogether, 55% of adults in the United States said they believed the Nov. 3 presidential election was ‘legitimate and accurate,' which is down 7 points from a similar poll that ran shortly after the 2016 election. The 28% who said they thought the election was ‘the result of illegal voting or election rigging' is up 12 points from four years ago."

About China: See the headline from Bloomberg with the accompanying chart. A picture is worth a thousand words.