Stocks extended their uptrend on Wednesday, as investors' sentiment remained bullish following the recent advances. The S&P 500 index was the highest since the early October yesterday. But will the rally continue despite some short-term technical overbought conditions?

The U.S. stock market indexes gained 0.6-0.7% on Wednesday, as investors' sentiment remained bullish. The S&P 500 index retraced more of its October-December downward correction of 20.2% yesterday. The market is now close to the previous medium-term local highs following an intraday rally to the new medium-term high of 2,821.24. The broad stock market's gauge is now just 4.4% below September the 21st record high of 2,940.91. The Dow Jones Industrial Average gained 0.6% and the Nasdaq Composite gained 0.7% on Wednesday.

The broad stock market retraced all of its December sell-off and it got close to the mediumterm resistance level of around 2,800-2,820, marked by the October-November local highs recently. So is it still just a correction or a new medium-term uptrend? The market broke above the 61.8% Fibonacci retracement of the 20% decline. And we may see an attempt at getting back to the record highs. But will the index break above the mentioned previous local highs? There have been no confirmed negative signals so far. The index is now back at the previously broken two-month-long upward trend line: 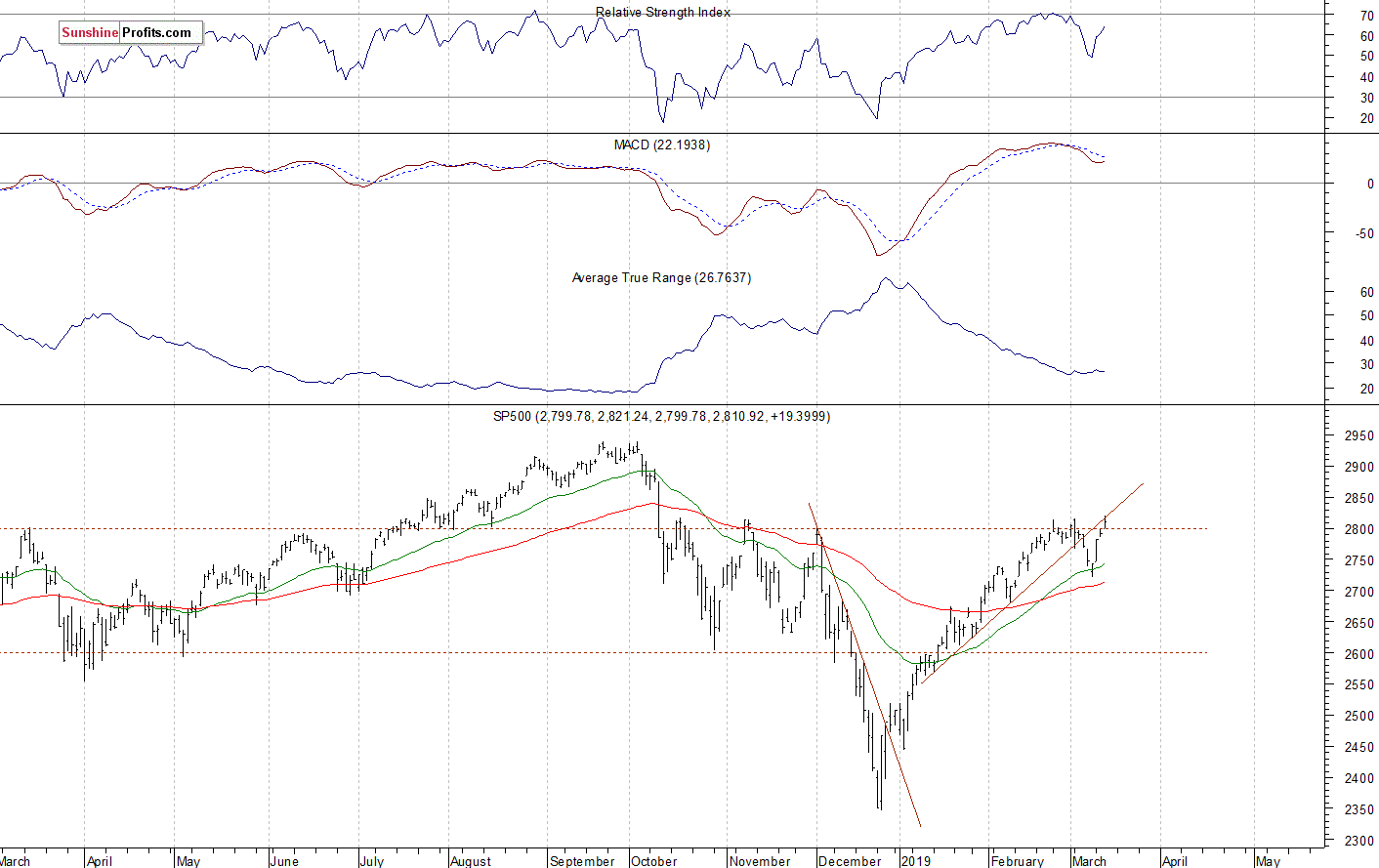 Expectations before the opening of today's trading session are slightly negative, because the index futures contracts trade 0.1-0.2% below their Wednesday's closing prices. The European stock market indexes have been mixed so far. Investors will wait for some economic data announcements today: Initial Claims at 8:30 a.m., New Home Sales at 10:00 a.m. The broad stock market will likely retrace some of its recent rally. We may see some short-term uncertainty. However, there have been no confirmed negative signals so far.

The S&P 500 futures contract trades within an intraday downtrend, as it retraces some of its yesterday's rally. The nearest important level of resistance is now at around 2,820-2,825, marked by the short-term local highs. On the other hand, the support level is at 2,790-2,800. The futures contract continues to trade above the 2,800 level, as we can see on the 15-minute chart: 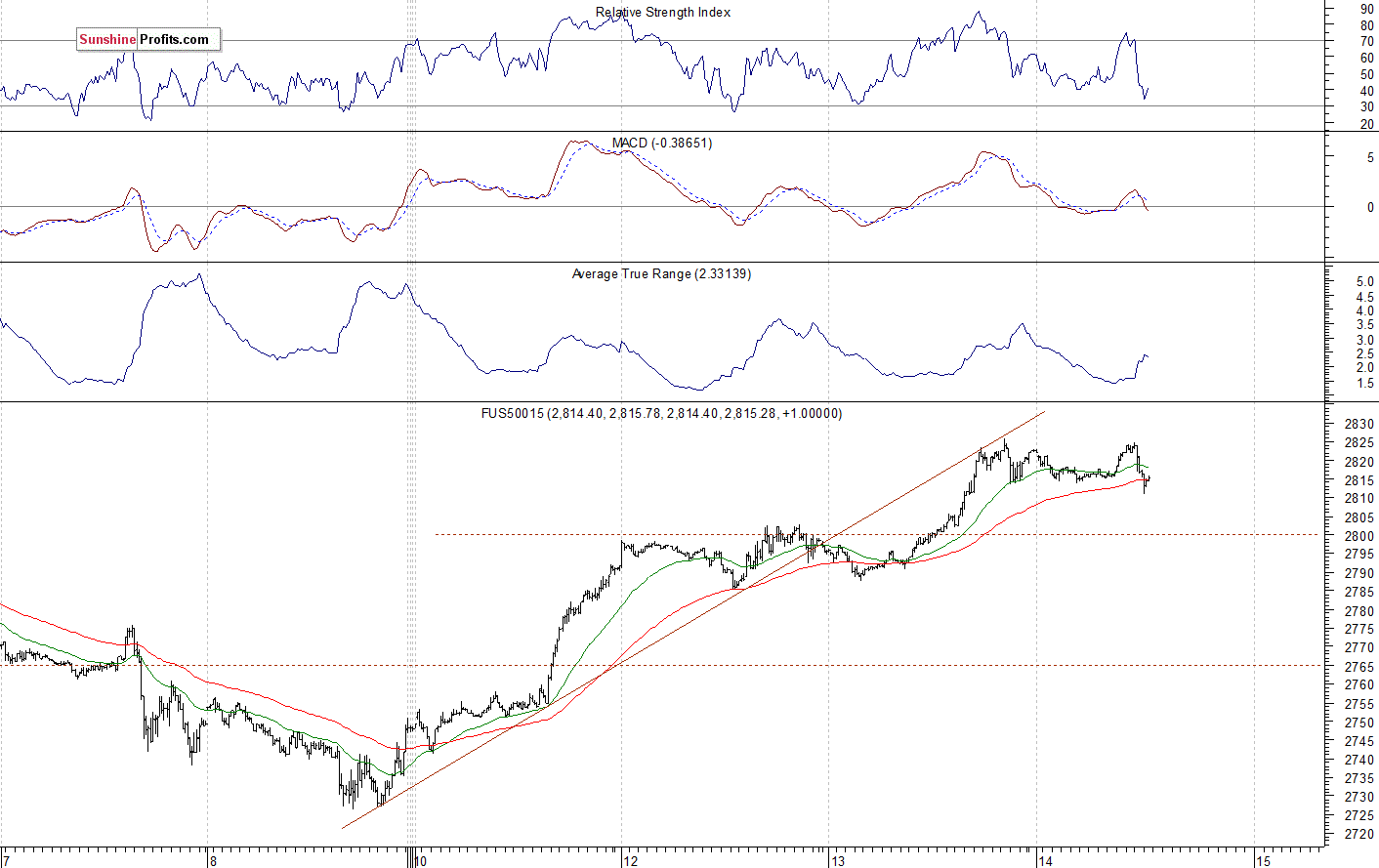 The technology Nasdaq 100 futures contract follows a similar path, as it retraces some of its yesterday's advance. However, it remains within a relatively narrow intraday trading range along the 7,300 level. The market rallied around 1,500 points from December the 26th local low of around 5,820. The nearest important resistance level is now at 7,320. On the other hand, the support level is at 7,200-7,250, marked by the recent resistance level. The Nasdaq futures contract remains above its three-day-long upward trend line, as the 15-minute chart shows: 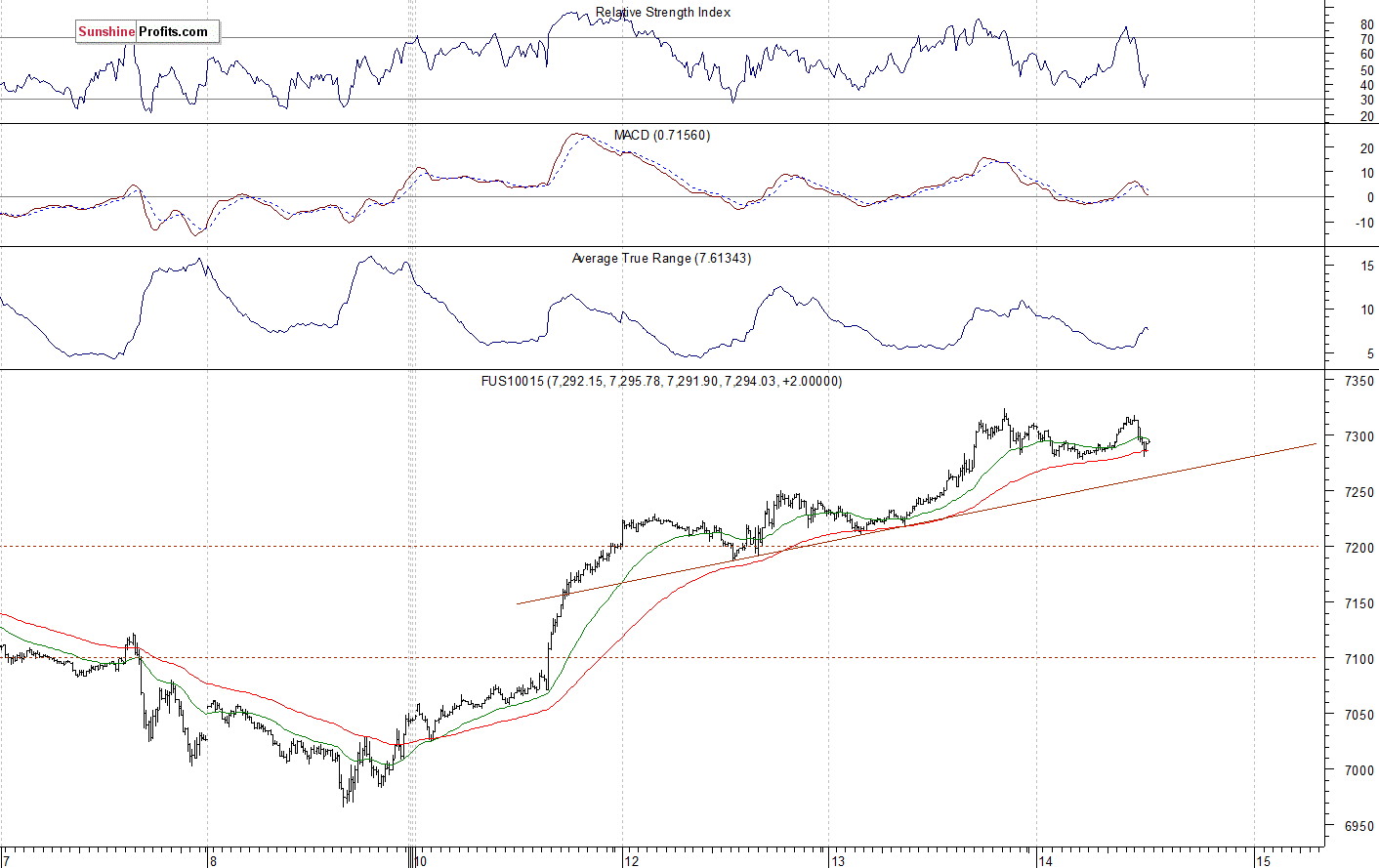 Let's take a look at the Apple, Inc. stock (AAPL) daily chart. The market broke above its recent local highs on Monday and then it broke slightly above the $180 level. The next resistance level is at $190-200. There have been no confirmed negative signals so far: 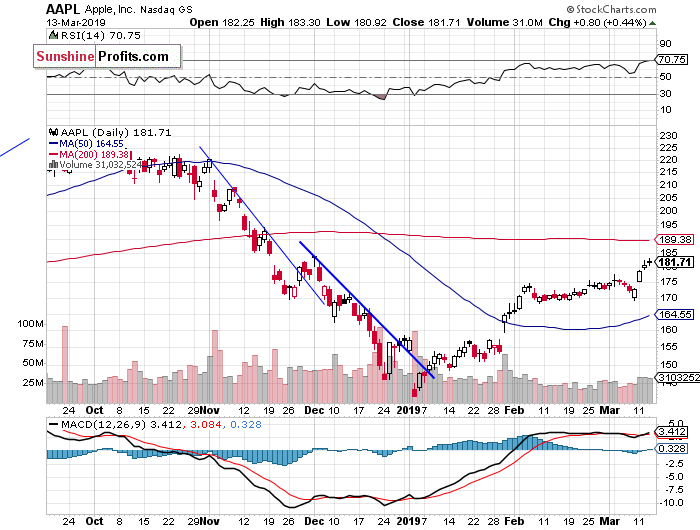 Now let's take a look at the daily chart of Amazon.com, Inc. (AMZN). The market retraced its recent decline this week. However, it continues to trade along the medium-term downward trend line. There is a relatively important resistance level of around $1,700-1,750, marked by the previous local highs: 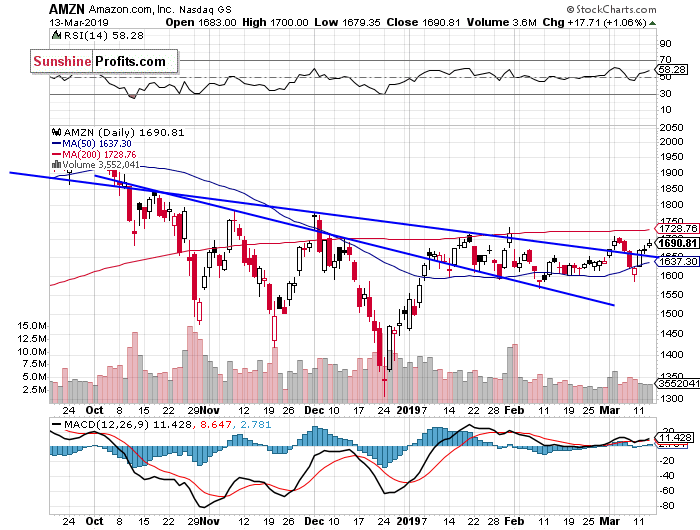 The Dow Jones Industrial Average retraced some of its recent decline this week, following bouncing off the support level of around 25,000-25,500. For now, it looks like an upward correction. However, if the blue-chip stocks' gauge breaks above the 26,000 level, we could see more buying pressure: 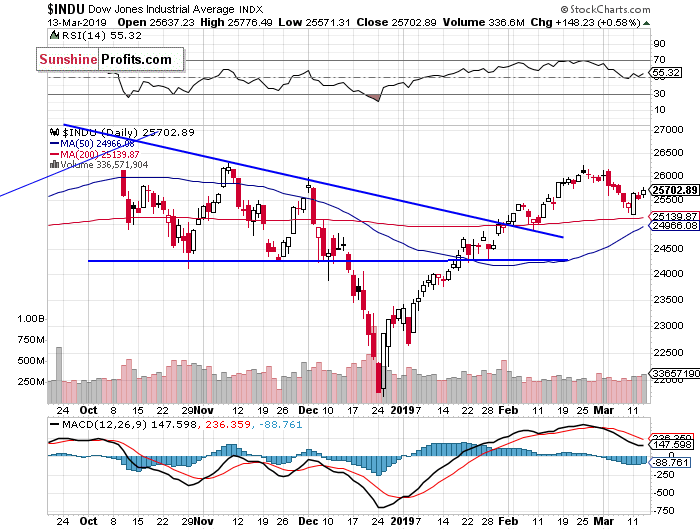 Let's take a look at the Japanese Nikkei 225 index. It accelerated the downtrend in late December, as it fell slightly below the 19,000 level. Since then it has been retracing the downtrend. Recently the market broke above its local highs and the 21,000 resistance level. But then it bounced off the resistance level of around 22,000 and retraced most of the recent advance. It bounced off the 21,000 mark again: 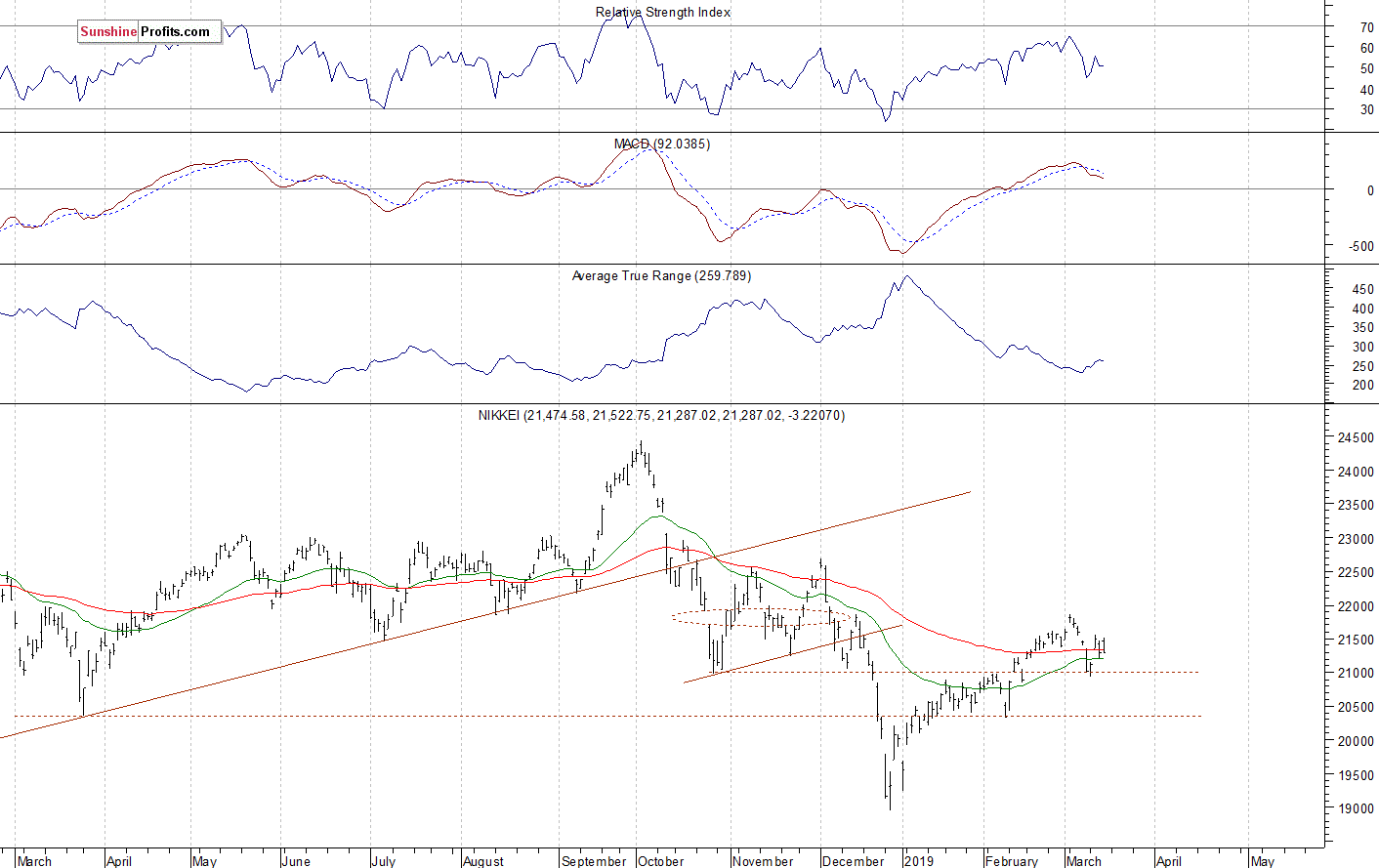 The S&P 500 index extended its recent run-up yesterday, as it got the highest since October the 10th before slightly retracing the intraday rally. The market came back to the previously broken two-month-long upward trend line. So will it act as a resistance level? We could see some short-term uncertainty, as stocks reach their previous medium-term highs.

Concluding, the S&P 500 index will likely open slightly lower today. We may see some short-term fluctuations following the recent rally. There have been no confirmed negative signals so far.