The Catalonia vote is not the same thing as the Brexit referendum. Catalonia was voting for members of the assembly, not directly on secession. After the separatist parties won a majority, the euro spike down to 1.1816 corrected itself in the next two hours. The euro is still moving downward, but back inside a normal standard error channel.

On the hourly chart—see above—it may resume the downmove to test the vote-inspired low, which is near the 50% retracement at 1.1819, or even continue to the 62% retracement at 1.1800. But at a guess, the almost immediate recovery of the shock spike implies that euro bulls are not defeated by the Catalonia event and willing to overlook it in the grand scheme of things. Having said that, it's likely end-of-year position adjustment is already upon us and that alone accounts for a soft euro.

Having said that, political uncertainty is by no means over in Europe. Spain could be in turmoil for months. Italy will hold an election in March, too. Germany is calm and stable but also without a gov-ernment yet. Markets are not panicking about political disarray, but that can change.

The big US economics news today is the Nov core PCE deflator at 8:30 am. This is the number the Fed prefers to measure inflation. It's expected to rise slightly from 1.4% in Oct to 1.5% (vs. the target of 2%). We also get the associated personal income and spending, and durables—all at the same time. At 10 am we get the University of Michigan consumer sentiment index and new home sales. At 1 pm we get the Baker Hughes rig count. This is a huge amount of data to think about and despite the holiday-thinned market, any or all could have the effect if increasing volatility. We assume the market will slow down to a trickle in mid-morning at our peril.

The core PCE deflator has two meanings. The obvious first one is to guide expectations about the Fed's policy change path. This is harder than usual because of a new chief arriving in Feb when Yellen re-tires. As we noted before, Powell can change the whole script by changing the metrics. No one expects Powell to rock the boat by doing that, but he is not an economist and might shift the Fed away from the Phillips Curve orientation to something else. Economics doesn't offer other credible and accepted mod-els of inflation, but the Phillips Curve has shown itself to be inadequate and unreliable, resulting in "puzzles" and "mysteries." Maybe a different approach is desirable. We don't expect massive change on Day One, though, and in the meanwhile, we are stuck with the core PCE deflator and its confusing lack of correlation with unemployment.

The other meaning of the core PCE deflator pertains to the effect of inflation on a currency. You could use any old measure of inflation to do that—and academic studies do--but if the Fed likes this particular measure, it's as good as any other. The logic has it that rising inflation inhibits exports and the resulting worsening trade deficit inhibits capital inflow so that the currency depreciates to equilibrate trade. There is nothing much wrong with this big-picture idea except it falls apart when it comes to the US and the dollar, in part because the dollar is the top reserve currency and is demanded regardless of whether the US is running deficits. In fact, the US runs two deficits, budget and trade, and gets away with it because of having that reserve currency status ("exceptional privilege") as well as the largest and most varied financial markets. The twin deficits should make the dollar persistently weak , but his-torically this is not the case.

Therefore, it's wildly dangerous and inaccurate to link exports, even "real" (inflation-adjusted) exports, to the dollar. The Daily Shot reprints a chart from Capital Economics on the dollar and trade. This is our meat and potatoes but the chart is seriously, badly misleading. It seems so obvious—a cheaper cur-rency will push exports overseas and a more expensive one will draw in imports. But we have been tracking the dollar and the trade balance for decades and we smell this visual correlation can‘t be accurate. It's just not that simple. 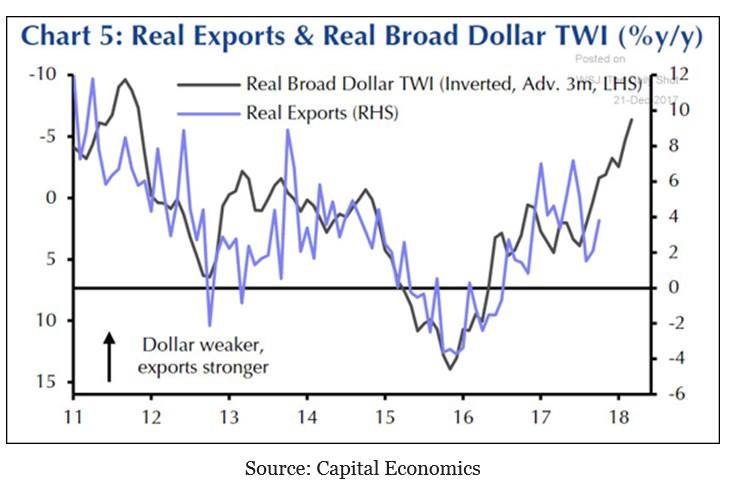 Besides, and here's the kicker, the currency price already has inflation and expected inflation incorpo-rated in the price. There's a lot of going around in circles here. The chief user of the real export con-cept, by the way, at least over the past thirty years, is the Bank of Japan.

We searched elsewhere for real exports, including the old standby, FRED (Federal Reserve data base) and got the next chart, which bears no resemblance to the Capital Economics chart. Why? First, the CE chart is monthly and the Fred chart is yearly. Plus, a whole lot of data adjusting is going on at Capital Economics. We also looked at Fred's quarterly export data as raw prices, not "real," and it doesn't look anything like the Capital Economics chart, either. And yet we all know the rule must be valid, that a cheap currency promotes exports. The puzzle is addressed in a technical addendum to a paper on "Understanding International Prices" at the American Economic Review in 2011, labelled "not intended for publication." For our purposes, the paper serves to explain why it's so difficult to explain the matrix of import-export prices, actual trade outcomes, and currencies. Too many factors, too many players. Some of the fun areas in-vestigated are "idiosyncratic demand factors" and "productivity spillover." One finding: a permanent reduction is tariffs by both sides takes 80 quarters to take full effect, or 20 years. Bottom line: the effort to derive a correlation between exports and a currency is an academic ex-ercise, if possibly useful to some poor policy guy researching trade matters.

What would be really useful today is to identify the opposite trend—how long does it take for tariffs and other trade inhibitors to damage imports/exports and by extension, the underlying economies? Since globalization has been going on for so long that it has become the norm, it may take a while for academics to research the alternative—squashing trade. As a footnote, recall that the Rest of the World is still pursuing freer trade. The Transpacific Partnership is going on without the US, for example. The US stands alone in wanting to halt globalization.

Significant note: this 80+-page paper does not contain a single chart. And nowhere do we find a stand-alone sentence that clearly and unequivocally says "real export prices are correlated with the currency." So, we can't refute the Capital Economics chart, but we can't buy it, either. The level of a currency is only one of many factors determining the path of exports, any of which can be decisive and outweigh the currency—like quality, one of those idiosyncratic demand factors. For example, our own bias is that if Germany makes a kitchen appliance or household machine, that's the one we want. If the British made the car or motorcycle, we look elsewhere. If the shoes are Italian, show me more. 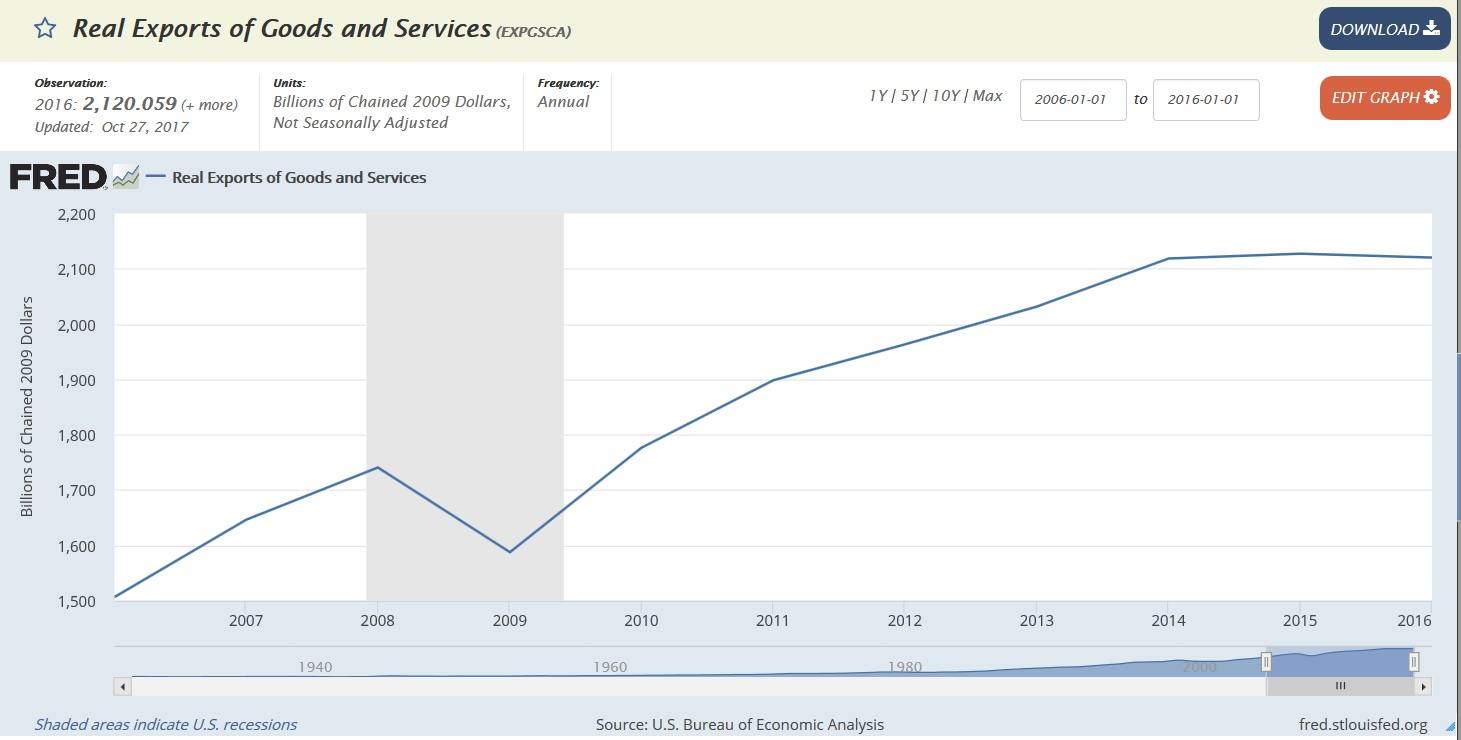 Probably the important take-away is the usual "be careful what you read." We fear that thousands of people, including nitwit Trump, will see this chart and automatically assume a weak dollar is always and forever good for the US economy, and agitate lawmakers, regulators and the Fed toward that end. Former Fed chairman Volcker, who knows a thing or two about currency crises, wrote many times that there is something terribly wrong when the world's leading economy has a weak currency.

The fundamentals—robust economy, rising interest rates, even tax reform—all point to a stronger dollar. So where is it? Perhaps a chaotic and incoherent White House has something to do with reducing confidence.

Similarly, the terrible, awful, really bad path of Brexit so far is failing to tank sterling. We have no idea why GBP traders persist in buying it, even in the face of one negative report after another. And longer term, we can't honestly say populism has been squashed in Europe. It keeps rearing its head, and as we saw last year in the French election and elsewhere, can do real harm to the euro.

Happy holiday to all.

Next report will publish Tuesday, Dec 26

This is an excerpt from “The Rockefeller Morning Briefing,” which is far larger (about 10 pages). The Briefing has been published every day for over 25 years and represents experienced analysis and insight. The report offers deep background and is not intended to guide FX trading. Rockefeller produces other reports (in spot and futures) for trading purposes. To see the full report and the traders’ advisories, sign up for a free trial now!