The US will publish this Friday the November Nonfarm Payrolls report and is set to bring more pain to the USD. The country is expected to have added 481K new positions in the month, below the previous 638K. The unemployment rate, however, is seen improving from 6.9% to 6.8%. Average Hourly Earnings are expected at 0.1% MoM and rising by 4.3% YoY, below the previous 4.5%.

The dollar is fragile heading into the release, in a decline that’s hard to justify from the macroeconomic side. US data has been quite consistent with economic recovery, and while it may not yet be at pre-pandemic levels, it is heading in the right direction. Australia and the UK are behind the US, while other economies, such as the EU, are far beyond in the run. Brexit is a drag for the pound and the shared currency, but there’s little to justify EUR/USD trading at 1.2100 or GBPUSD at 1.3400.

Covid vaccines, trade tensions between the US and China, Brexit and a US stimulus package, introduce loads of noise in the markets these days. In this scenario, US employment data will likely have a limited impact on currencies.

While the previous NFP was kind of encouraging, the economy added just 638K new positions in October. At this point, the economy recovered roughly 55% of the 22 million jobs that were lost with the pandemic. The expected 481K win for November will barely move the bar.

The ISM Manufacturing PMI employment sub-components contracted sharply, below the 50 threshold. The Services PMI employment reading, however, improved from 50.1 to 51.5. Consumer confidence suffered a major setback in November, amid resurgent coronavirus cases.

The broad dollar’s weakness has left the currency quite oversold across the board. A corrective movement´s chances are high, and an upbeat employment report could be the catalyst, exacerbated by profit-taking ahead of the weekend.

A better-than-anticipated report may also underpin equities and the generally positive mood, favoring the most European currencies and commodity-linked ones. Given Brexit talks, the GBP may not be the best trading choice. Canada is also publishing its employment figures on Friday, so USD/CAD may be too noisy. EUR/USD and AUD/USD may be the best options.

EUR/USD’s overbought conditions may see it correcting south, yet as long as it holds above 1.2000, bulls will remain in control. 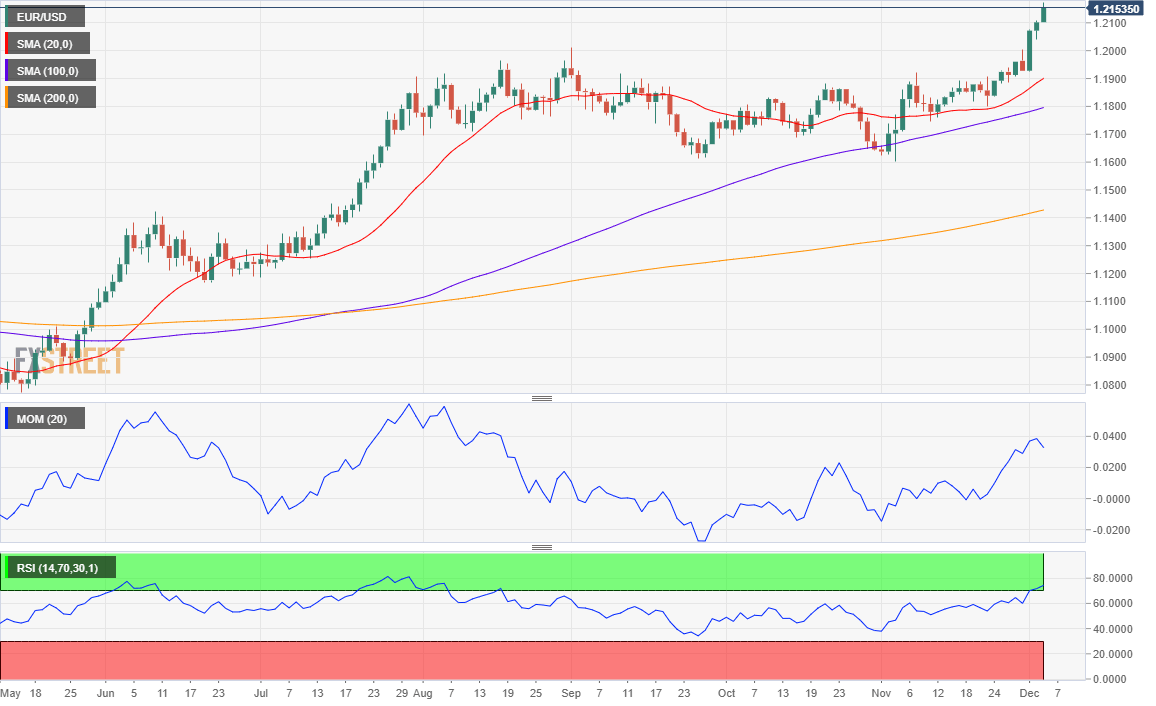