The euro rose against the US dollar after the relatively strong Eurozone inflation and GDP data. According to Eurostat, the headline CPI in the Eurozone rose by 2.2% in July after rising by 1.9% in the previous month. This rate was above the ECB’s new target of 2.2%. In France, the headline CPI rose by 1.2% in July. Still, these numbers will likely not change ECB’s mind about monetary policy. In its meeting this month, the bank left interest rates and quantitative easing unchanged. It also reiterated that it was comfortable if inflation rose above 2.0% for a while. Further data from the Eurozone showed that the economy expanded by 13.7% in the second quarter after it contracted by 1.3% in Q1.

European equities waivered as worries of the Delta variant continued. In the UK, the FTSE 100 index declined by 0.60% while in Germany, the DAX declined by more than 100 points. The Euro Stoxx 50 index fell by 0.30%. This performance happened even after the relatively strong American and European earnings. For example, Rightmove said that its revenue in the past six months rose by 58% as demand for houses recovered. Meanwhile, Renault reported its first profit since the pandemic started. Its revenue rose by 27% to more than 23.4 billion euros. At the same time, IAG, the parent company of British Airways, said that its operating loss narrowed to 967 million. This was better than the expected loss of more than 1 billion euros.

The Nasdaq 100 index futures retreated even after a relatively strong earnings week. On Monday, Tesla reported a record quarter even as costs kept rising. The results were followed by the strong performance by Microsoft, Facebook, Apple, and Google. And on Thursday, Amazon said that its revenue rose to more than $115 billion. This pushed its profit to more than $7.8 billion. These results mean that the five companies made more than $70 billion in profits in the past three months alone. Still, Amazon’s shares declined by more than 7% after it signalled that its business was slowing down. It expects that its revenue for the third quarter will rise to between $106 billion and $112 billion.

The Nasdaq 100 index declined to $14,800 partly because of the weak performance by Amazon. On the four-hour chart, the index is slightly below the all-time high of $15,155. It is also slightly below the important resistance at $15,000. The MACD has moved below the neutral line while the Relative Strength Index (RSI) is at the neutral level of 42. Therefore, the index will likely end the week in the current range. 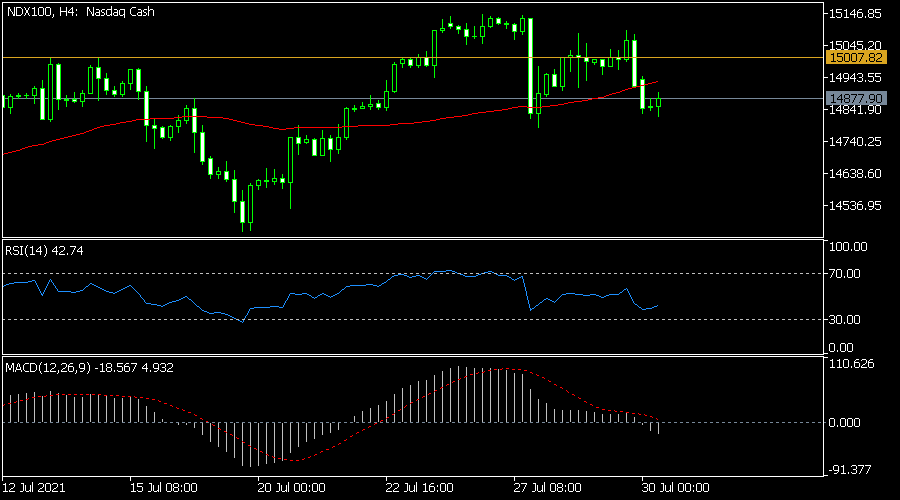 The EURUSD pair maintained its bullish momentum after the strong Eurozone economic data. It rose to 1.1900, which was the lowest level since July 1. On the four-hour chart, the pair moved above the upper side of the falling wedge pattern. It has also moved above the 25-day and 15-day moving averages. The RSI and MSACD have also risen. Therefore, the pair will likely keep rising as bulls target the next key resistance at 1.2050.

The NZDUSD pair rose to a high of 0.7016, which was the highest level since July 19th. On the four-hour chart, the pair moved above the red descending trendline. It also rose to the upper side of the Bollinger Bands and above the 25-day and 50-day moving averages. It also moved above the neutral line of the MACD. The pair will likely keep rising during the American session.