Jobless claims appear to be headed lower after the December lockdown in California drove benefit requests back to their level of late September.

First time unemployment claims are forecast to drop to 830,000 in the January 29 week after 847,000 prior. California Governor Gavin Newsom has since rescinded the closure order and declining COVID-19 diagnoses and hospitalizations across the country may point to lower totals ahead.

Continuing Claims are projected to fall to 4.7 million in the week of January 22 from 4.771 million previous.

With January's national payroll figures due on Friday, the predictive quality of the claims figures are again in the spotlight. It was the spectacular rise in benefit filings that prefigured the economic devastation of the economic shutdowns that began in March and April.

Claims have continued to rise in January with the average for the four weeks released to January 22 at 867,750, which is the highest since September 25. If the forecast is accurate the average for January will be 860,250.

The consensus forecast for last month's payrolls is 50,000 would seem optimistic given the still rising claims figures.

However, two factors may militate against another month of firings by employers.

First the pandemic is in retreat in the US and the economic uncertainty brought on its much greater recent wave should ebb with the case rates.

Second, business optimism has been strong and steady for eight months.

Since the recovery from the spring collapse began in June the Manufacturing Index has averaged 56.61. The three-month moving average of 58.96 is the best since October 2018.

The Employment Index rose to 52.6 in January, the best score since June 2019. It has been positive for three of the last four months after 14 months below the 50 division between expansion and contraction. 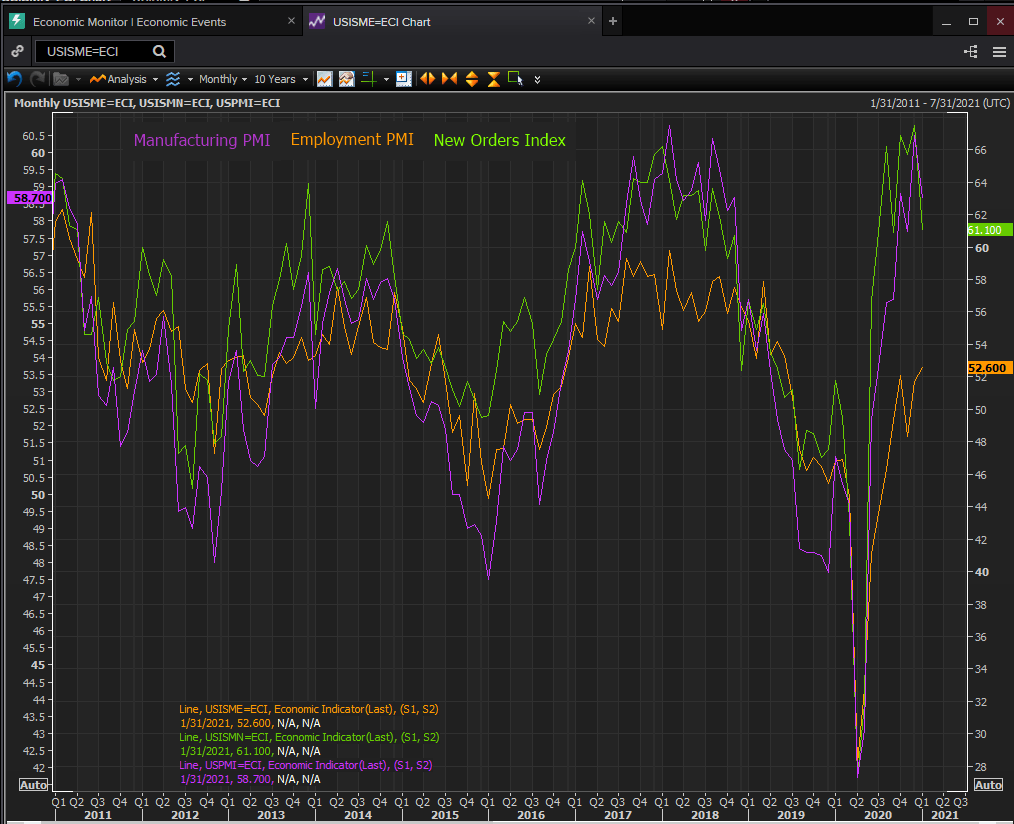 January's services data will be reported on Wednesday. The overall PMI from this far larger sector has averaged 56.8 since recovering from two negative months in June.

The Employment Index dropped into contraction for seven months from March to September as service jobs absorbed the brunt of the business closures. October and November were positive at 50.1 and 51.5 but the index reverted to 48.2 in December as businesses were again shuttered in California and elsewhere. The forecast for January is 49.7.

Conclusion and the markets

The December surge in claims was due to the forced closure of the California economy, the largest in the US, and business inhibitions elsewhere. Since peaking at 920,000 in the first two weeks of January, initial claims will have fallen 8.9% in the subsequent 14 days, if the latest estimate is correct. With the California lockdown ended and business optimism at relatively high levels, the risk to the latest claims numbers is to the downside.

As with all numbers this week, markets will note the development but wait for Friday's NFP release before deciding which way to swing the dollar.