Gold recovered after dropping below $1,800 on Friday but ended up losing more than 3% on a weekly basis, registering its second-largest one-week drop of the year. The fact that XAU/USD closed below the 200-day SMA for two straight days could be seen as a significant bearish development and cause buyers to remain on the sidelines in the near term.

The dollar capitalized on safe-haven flows at the start of the week and caused XAU/USD to continue to push lower. In a report published over the weekend, the International Monetary Fund (IMF) warned that the global economic growth could slow at a faster pace than expected with inflation running higher for longer than forecast. Additionally, the data from China showed that Exports rose by 1.9% on a yearly basis in April, missing the market expectation of 16.4% by a wide margin.

On Tuesday, reports of Chinese authorities tightening coronavirus-related restrictions in the city of Shanghai despite a falling number of infections didn’t allow risk sentiment to improve. Meanwhile, several FOMC policymakers voiced their support for two more 50 basis point (bps) rate hikes at the next two policy meetings, helping the greenback preserve its strength. Moreover, Cleveland Fed President Loretta Mester noted that they would not rule out 75 bps rate increases forever.

The modest improvement witnessed in risk sentiment caused the dollar to lose its appeal mid-week and opened the door for a rebound in XAU/USD. In a speech on Tuesday, US President Joe Biden said that they were considering eliminating Trump-era tariffs on Chinese imports to help inflation come down. The data published by the US Bureau of Labor Statistics revealed on Wednesday that inflation, as measured by the Consumer Price Index (CPI), edged lower to 8.3% on a yearly basis in April from 8.5% in March. With the benchmark 10-year US Treasury bond yield dropping below 3% after this data, gold managed to close the day in positive territory.

Nevertheless, the risk rally remained short-lived and the souring market mood on Thursday provided a boost to the safe-haven dollar, causing gold to suffer heavy losses and close below the 200-day SMA for the first time since February. In the meantime, FOMC Chairman Jerome Powell reiterated that he was expecting two more 50 bps rate hikes in June and July and noted that they were prepared to do more in case the data were to “turn the wrong way.” As a result, the US Dollar Index touched its highest level in nearly two decades at 104.92 late Thursday.

Markets turned relatively quiet on Friday and gold moved sideways near the two-month low it set at $1,810. Although the yellow metal briefly dropped below $1,800 in the American session, it managed to erase a portion of its daily losses after the University of Michigan’s monthly publication showed that consumer confidence in the US deteriorated in early May.

Investors will keep a close eye on the Retail Sales data from China early Monday, which is expected to show a decrease of 6% on a yearly basis in April. For the past few weeks, gold has been struggling to find demand anytime data from China reminded investors of the negative impact of the lockdowns on economic activity. A similar reaction could be witnessed at the start of the week if there is a bigger-than-forecast drop in sales. A positive reading could limit gold’s losses but it is unlikely to trigger a risk rally unless Chinese authorities start easing restrictions in Shanghai and Beijing.

On Tuesday, the US Census Bureau is expected to report a monthly increase of 0.6% in  US Retail Sales in April. Again, it would be surprising to see a significant change in risk sentiment on a single data point. Even if an upbeat print could help US stocks gain traction, it would also confirm the Fed’s view that they could continue to tighten the policy rate at an aggressive pace without worrying about hurting the economy. More importantly, healthy consumer demand could be seen as a factor that can drive inflation higher.

Later in the week, the US economic docket will feature the weekly Initial Jobless Claims and the Federal Reserve Bank of Philadelphia’s Manufacturing Survey for May.

In short, a prolonged weakening of the dollar doesn’t look likely in the current market environment. The factors that have been driving the greenback’s valuation, namely the ongoing Russia-Ukraine conflict, heightened inflation fears amid lockdowns in China and the Fed’s tightening prospects, should remain intact next week. Hence, it would be reasonable to expect that gold’s recovery attempts are likely to remain limited in the short term. 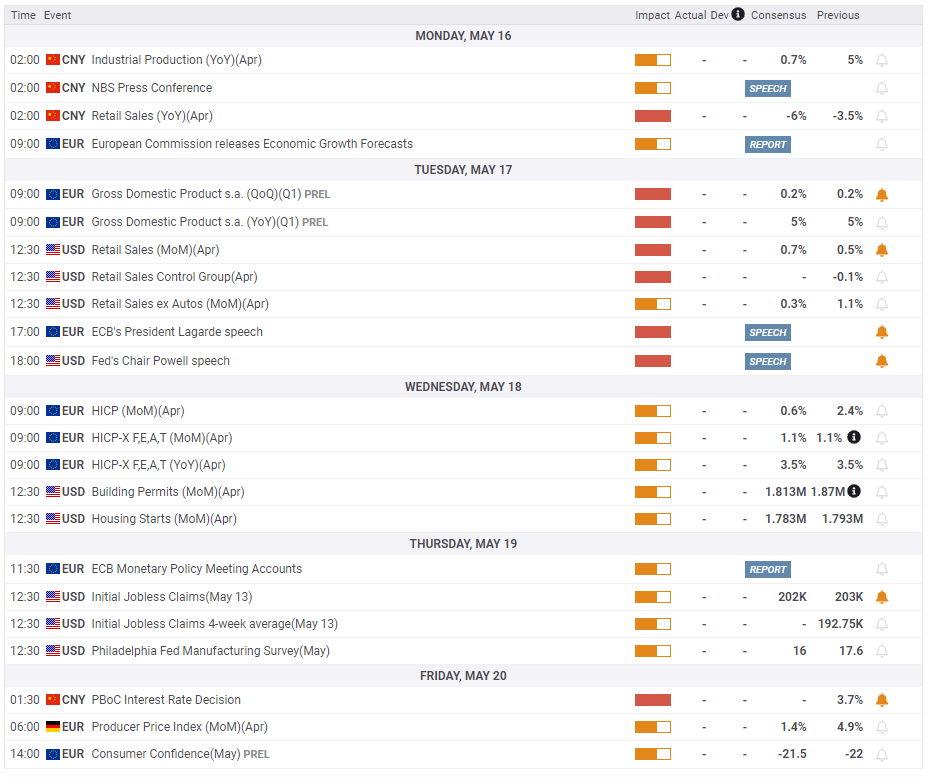 The Relative Strength Index (RSI) indicator on the daily chart dropped to 30 for the first time since August following this week's price action, suggesting that gold could stage a technical correction before the next leg lower.

On the upside, the 200-day SMA forms dynamic resistance at $1,840, which could be seen as a recovery target. As long as the pair fails to make a daily close above that level, however, the bearish bias should stay intact.

The FXStreet Forecast Poll paints a mixed picture for gold in the near term. Several analysts see the yellow metal staging a rebound next week while others see it testing $1,800. There is a slight bearish tilt in the one-month outlook but the average target sits at $1,835. 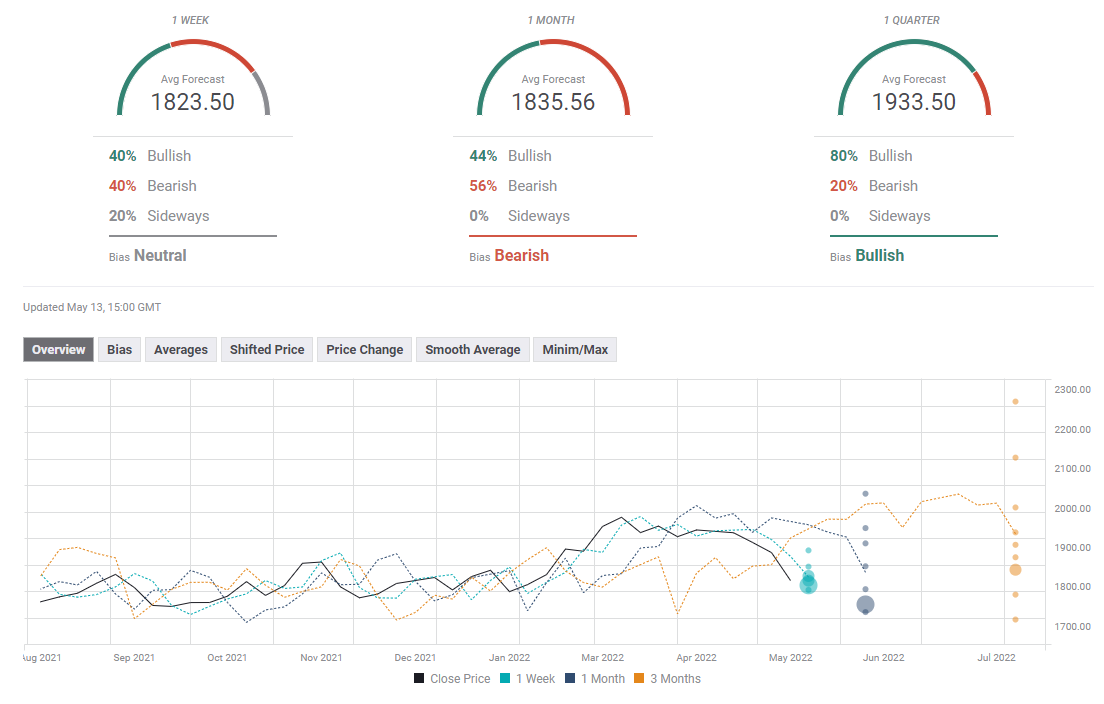