Bullish takeover? Close, but no cigar. The upbeat market mood and optimism about Britain's vaccines have been met by concerns about the virus and a hesitant market mood. The focus now shifts to the US, with the all-important Fed decision and the first look at US growth in 2021.

Fresh virus alarm: The world has been worried about India's record daily cases – surpassing 300,000 – and increases in other countries. For developed countries such as Britain, it means a higher risk of incoming variants and also an economic slowdown due to falling demand. These concerns have boosted the safe-haven dollar.

UK Prime Minister Boris Johnson also warned of a potential new COVID-19 wave in the winter. Yet his concerns have come amid a successful local vaccination campaign and a persistent drop in infections, hospitalizations and deaths. The situation is improving across the Western world. 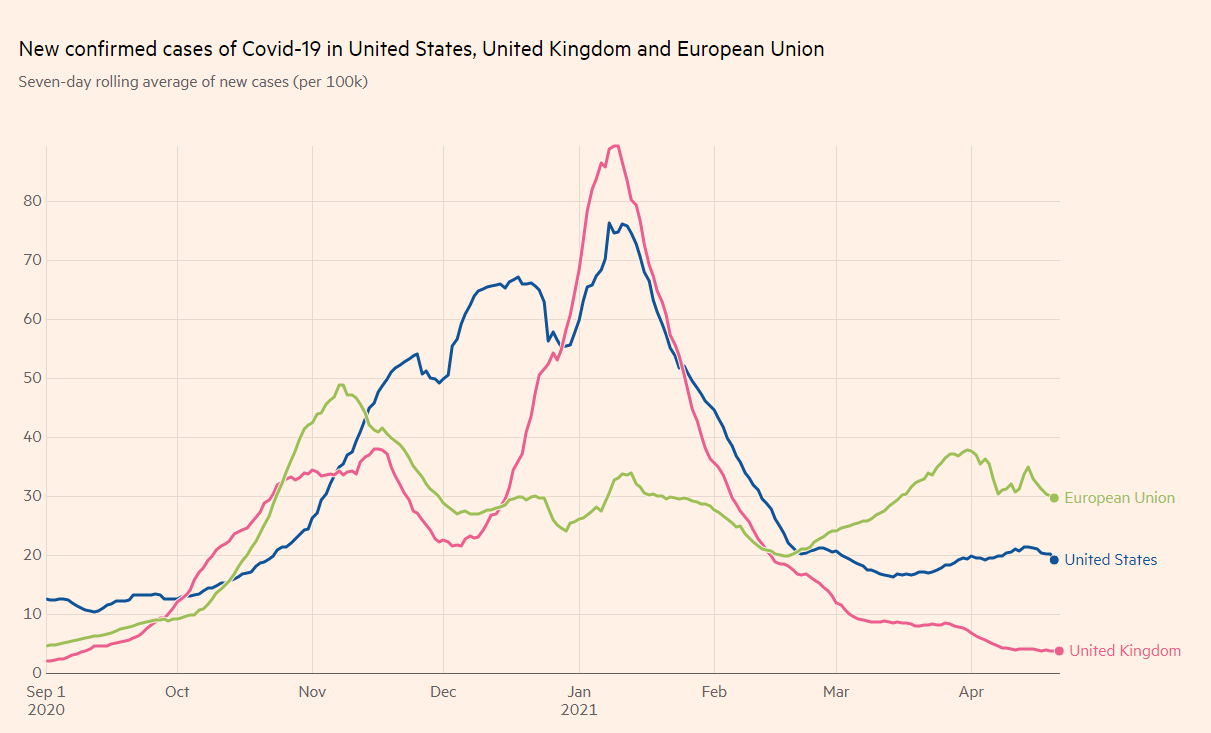 US covid curves: The US also seemed to turn a corner against the virus, as the infection curve flattened and later began dropping. However, the suspension in using Johnson & Johnson's vaccines seemed to have had a chilling effect on the immunization campaign – the pace of new inoculations slowed down after several weeks.

Cool Britania: UK data was mostly positive, with the Unemployment Rate dropping to 4.9% in February and jobless claims edging up by only 10,100 in March – both showing the labor market's strength. The news provided sterling some support.

America booming: On the other side of the Atlantic, US jobless claims beat estimates once again, falling to 547,000 in the week including the 12th – when Nonfarm Payrolls surveys are conducted. The publication gave a boost to the greenback. Treasury yields, which had a dominant role in rocking the dollar, seemed to have a weaker impact after settling below 1.60%.

April is about to conclude, and with it, the end of the "dry month" in vaccinations. Fears of a substantial slowdown in immunizing Brits seemed to have been exaggerated, as second doses are being given at full speed.

The recent resumption of administering first doses may accelerate in the coming week, putting Britain on a firm footing toward the next step of the reopening. Any acceleration would support sterling. 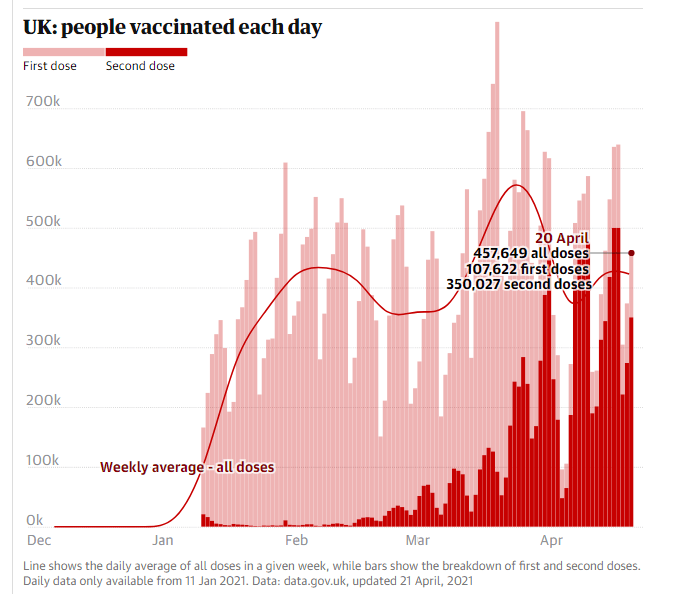 Brexit has been on the back burner in recent weeks, but the imminent EU ratification of the trade deal with the UK may shed fresh light on the impact of Britain's exit and the leftover topics.

Rules regarding the services sector, and especially the financial one, are still up in the air. Any acrimony could push the pound lower while progress toward a deal would support sterling. However, covid overshadows Brexit, and it may remain so once again.

The economic calendar features only lightweight releases, leaving the scene to US events.

US events: Fed and GDP stand out

The American economy is on a roll, thanks to fiscal stimulus and vaccines. The US has already inoculated 40% of its population with at least one dose, flattening the curve. However, a considerable deceleration has been recorded in recent days. While a million injections still represent a satisfactory rhythm, a further halt could raise alarm bells. 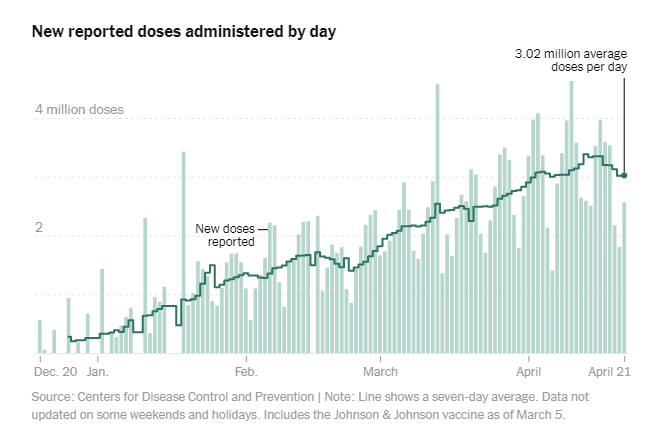 President Joe Biden's economic plans are being discussed in Washington, and any updates may move markets. However, top-tier events on the economic calendar are set to grab almost all the attention.

Economists expect Durable Goods Orders figures for March to show moderate increases after a slide in February. However, after Nonfarm Payrolls and Retail Sales substantially surprised to the upside, another blockbuster figure for last month cannot be ruled out. The data feeds into growth figures due on Thursday.

The first release of Gross Domestic Product statistics for the first quarter might be mixed, as the first months of the year were a transition period. Covid infections were sky high in January, while February was a mix of an improving virus situation but a "deep freeze" storm. And as mentioned earlier, March was probably when the economy launched its massive recovery.

GDP will likely overshadow weekly jobless claims, but Friday's Core Personal Consumption Expenditure (Core PCE) is of interest, as it is the Fed's preferred measure of inflation. Any increase toward the bank's 2% could move markets. Personal Spending and Personal Income will also be eyed.

The main event of the week is the Federal Reserve's rate decision on Wednesday. The world's most powerful central bank is set to leave its policy unchanged but could signal an upcoming shift. Some market participants speculate that the Fed would hint that it will lay out a plan for tapering down its bond buys in June when it releases new forecasts. That could boost the dollar.

Federal Reserve Vice-Chair Richard Clarida said that any such move would come at a meeting including fresh projections. Chair Jerome Powell vowed to communicate any tapering in an orderly and timely fashion. Will April's meeting be the time to send such a signal?

If the bank refrains from indicating its next move, investors, focus on the bank's messages on its two mandates – employment and inflation. On the labor front, Powell will likely insist that 8.4 million Americans are still out of work, thus necessitating more monetary support. But how will he react to the sharp drop in jobless claims? Optimism on employment could boost the dollar.

A similar dilemma faces the Fed when it comes to inflation. According to the recent publication, the Consumer Price Index remains tame, supporting the bank's stance that any upside bump is only "transitory." However, the global chip shortage could last for an extended period, and Procter &Gamble's decision to hike prices both pose questions about creeping inflation. Any shift from the current dismissal of price rises could send the dollar surging.

All in all, acknowledging the improving outlook and hints of action could boost the dollar while sticking to considerably accommodative policy would weigh on the greenback. 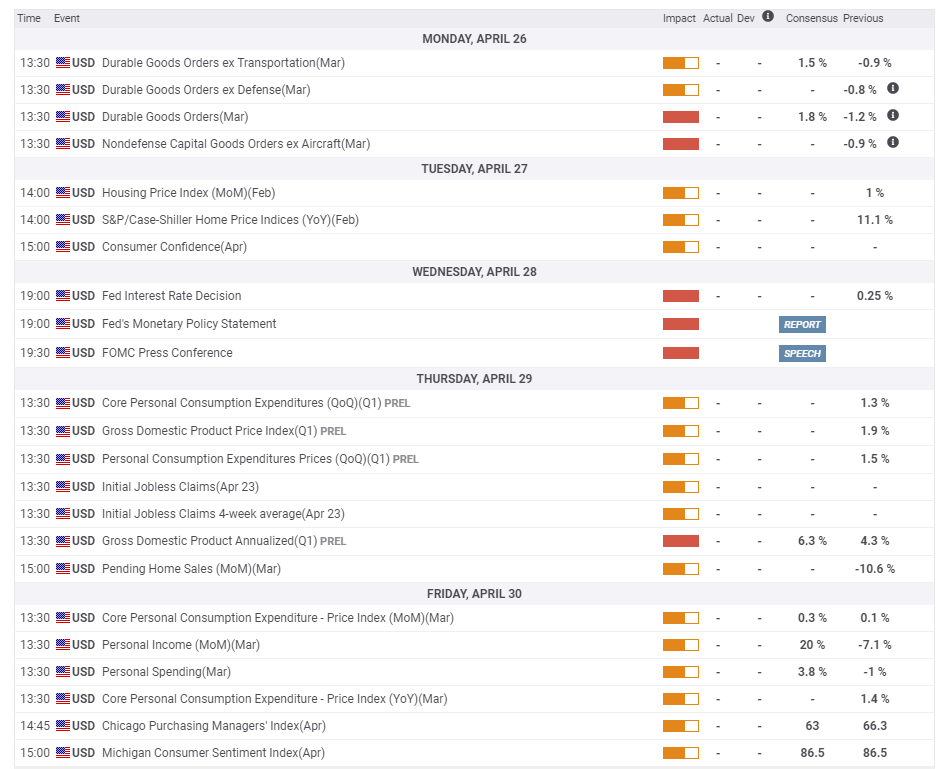 Pound/dollar continues trading in the wide 1.3670 to 1.4010 range, as the daily chart shows. While momentum is to the upside in the past week, the pair slipped below the 50-day Simple Moving Average (SMA). Nevertheless, it remains above the 100-day and 200-day SMAs. Overall, bulls are in the lead, but it is narrowing.

Support awaits at 1.38, which capped the pair on its way up in mid-April. It is followed by 1.3775, a swing low from early March, and then by the double-bottom of 1.3670 mentioned earlier. Breaching that level would open the door to 1.3565.

The last week of April is when America's economic boom – and fears of inflation – may spark the strongest reactions, potentially causing the dollar to storm the board. The Fed would need to work hard to deny greenback bulls their rally.

The FXStreet Forecast Poll shows that experts are bullish in the short term, are hesitant about the medium term, and bullish with a higher target later down the line. It seems that the narrower range-trading has convinced those surveyed that movements will likely be more limited going forward. 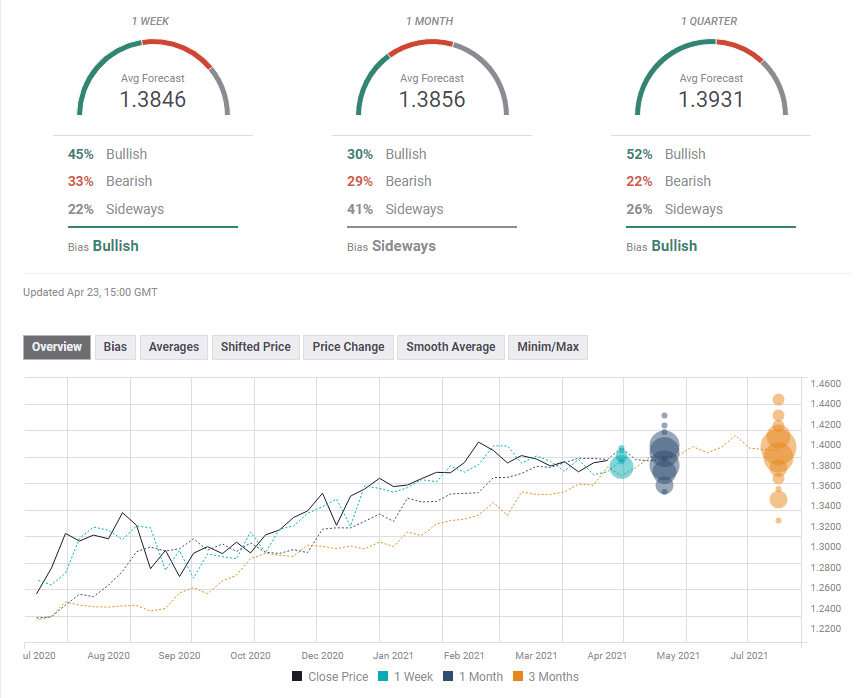