Something is more than nothing – the Bank of England monetary policy tweak has pushed up the pound, while concerns about road bumps in the US economy have kept the dollar from storming the board. Can the upswing continue? Economic data has rising prominence as covid concerns fade on both sides of the pond.

This is not a tapering decision – Andrew Bailey, Governor of the Bank of England, denied that the slower pace of bond-buying represents a shift in policy. Nevertheless, it could later morph into cutting the program short, as the bank's outgoing Chief Economist Andy Haldane wanted.

Moreover, the BOE upgraded its economic forecasts as Britain's successful vaccination campaign boosts the economy. Infections continue falling, and the country is on course to its full reopening due on June 21. 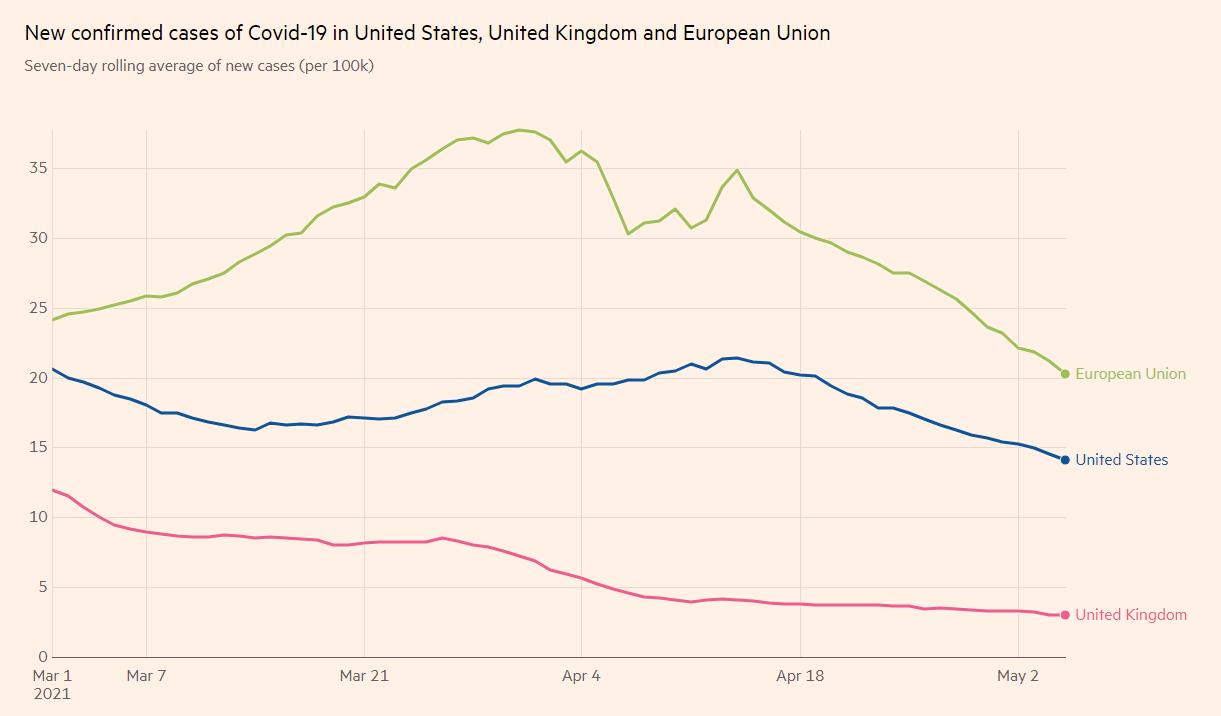 Coronavirus statistics are also falling in the US, but so has the pace of vaccinations, which is trending lower. The drop prompted the White House to change its vaccination strategy, opting to reach people in more remote places.

Speculation about the Federal Reserve's next moves had a more significant impact on the dollar. Treasury Secretary Janet Yellen said that interest rates could rise if needed, causing markets to stumble and the dollar to gain ground. Her previous post as Fed Chair gave her words more clout.

However, Yellen backtracked her comments, and other officials at the central bank, including current Jerome Powell, stuck to their message. They insisted inflation is transitory, that tapering bond-buying is off the cards and that the economy still has a long way to go.

ISM's Purchasing Managers' Indexes for April showed that supply chain issues and higher prices are causing roadblocks in the economy. Both gauges retreated from overheating territory to one of healthy growth – Goldilocks for stocks and for dollar bears.

Nonfarm Payrolls: Everything flipped on its head on Friday, when the US reported a meager increase of only 266,000 positions – far below nearly one million expected. The dollar took a deep dive in response, crumbling and allowing GBP/USD to advance toward 1.40.

At the time of writing, results from Scotland´s elections are still awaited. However, the Conservatives' victory in Hartlepool – a Labour bastion – may indicate that support for Prime Minister Boris Johnson is substantial.

Will Scotland begin striving for a new independence referendum? That could put Edinburgh on a collision course with London and cause political uncertainty that would weigh on the pound. The answer depends on the results of regional elections held on Thursday, yet results are only due over the weekend.

According to opinion polls, the ruling Scottish National Party is on the verge of an absolute majority, but nothing is guaranteed. If Hartlepool's vote is a barometer, the Conservatives have also put up a fight up north. If pro-unionist parties muster most seats in Holyrood, it would send sterling higher.

The UK continues its long road to exit the coronavirus crisis, and optimism will likely prevail while vaccinations continue at full speed. Britain has already reached over half its population with at least one jab, and extending the trend would keep the pound bid. 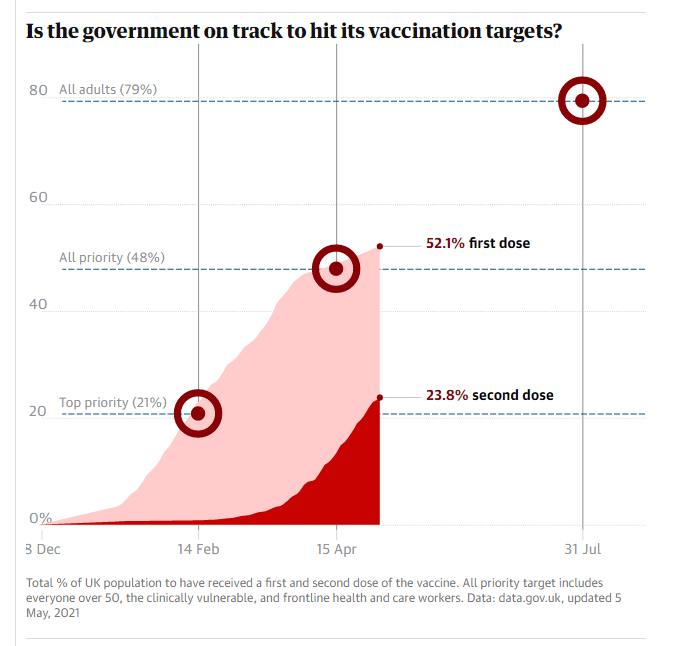 BOE Governor Bailey will have another opportunity to rock the pound after the latest decision. Any comments on the next policy moves – especially on cutting short the bond-buying scheme – would support sterling. However, insisting that the monetary policy remains highly accommodative means some pressure on the pound. He speaks twice during the week.

The highlight of the economic calendar is the first release of Gross Domestic Product figures for the first quarter of 2021. Britain was under a strict lockdown throughout most of that time, resulting in an output slump.

However, early figures for January and February came out marginally better than expected. The manufacturing sector has likely carried the economy forward, while services suffered a deep freeze.

What will be America's new corporate tax rate? President Joe Biden has shown flexibility on his spending and taxation plans, and in the meantime, Wall Street has been shrugging it off. It will still take a long time until Congress settles on the details.

The Food & Drug Administration is set to approve using the Pfizer/BioNTech vaccine for 12 to 15 year olds shortly. That could give a boost to America's slowing vaccination campaign. While most adults have received at least one jab, the slowing pace could result in an uptick in infections. An ongoing slowdown in inoculations may cause investors to cool their expectations. 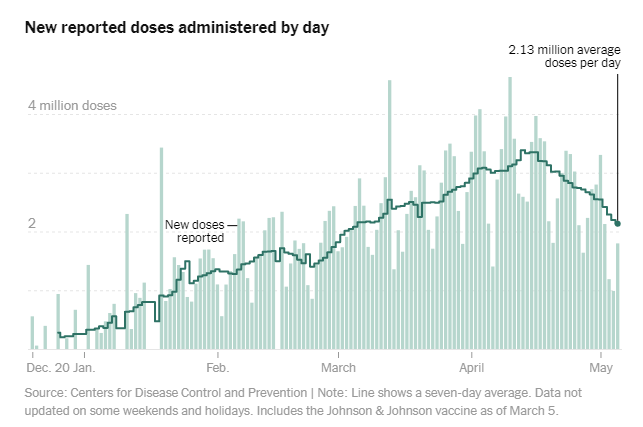 Is the US economy overheating, pushing inflation higher? After weeks of topping the agenda of financial media, a fresh direct answer is due with the publication of April's Consumer Price Index statistics. Headline CPI is set to jump from 2.6% to 3.6% yearly, mostly due to "base-effects" – the drop in prices recorded this time last year.

Investors and the Federal Reserve will be eyeing Core CPI, which is expected to surpass 2%, the Fed's target. Any upside surprise would raise rate hike expectations and boost the dollar, while softer figures could send it down.

Friday's Retail Sales data for April is set to rock markets. Expenditure leaped by 9.8% in March, a move largely attributed to stimulus checks. Did the trend extend to April? A far more modest increase of 0.8% is on the cards. Changes to the Retail Control Group will also be eyed.

Last but not least, the University of Michigan's preliminary Consumer Sentiment Index for May provides an even more up-to-date view of America's shopping spree. While another increase is on the cards, the indicator is set to remain below pre-pandemic levels. 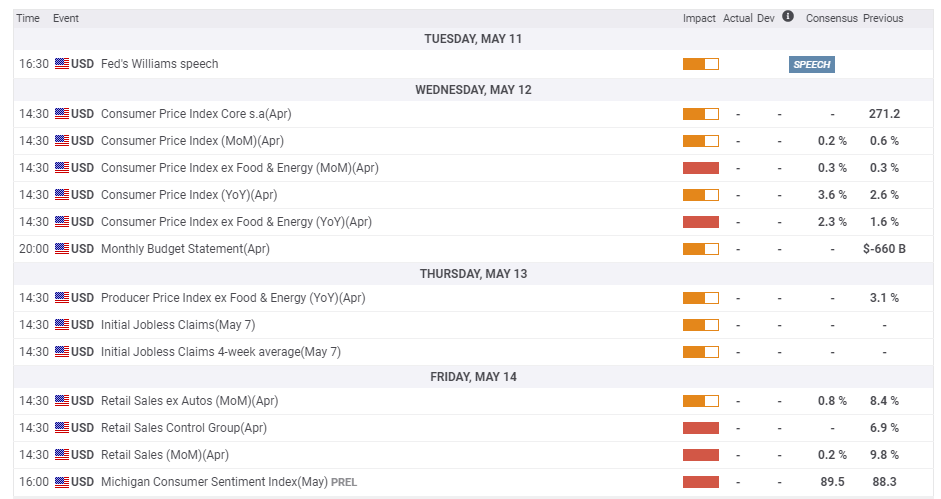 Pound/dollar remains entrenched in a range – disappointing those who want drama, but providing profits for those trading mean-reversion strategies. Nevertheless, bulls have an advantage. Momentum on the daily chart remains to the upside, and the currency pair is also holding above the 50-day, 100-day and 200-day Simple Moving Averages (SMAs).

That implies the next move would be a break above the triple-top of 1.4010 rather than tumbling under the double-bottom of 1.3670. 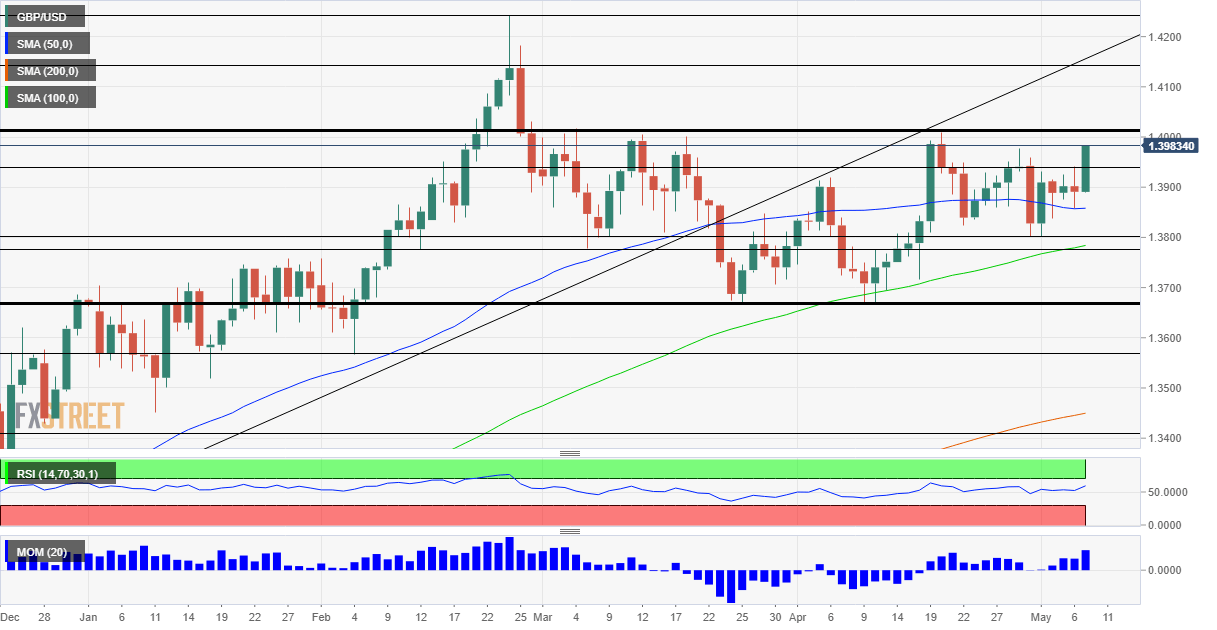 The narrative of an overheating US economy may be overblown. Alongside the Fed's broad agreement on loose policy. the dollar has room to fall. A cooldown is also likely in UK political tensions around Scotland and Brexit, at least in the short term – and that is pound-positive. All in all, the upside looks more appealing.

The FXStreet Forecast Poll shows that experts foresee a downside correction from the latest upswing, with falls within the 1.39 handle. However, an advance above 1.40 is priced in for the longer term. 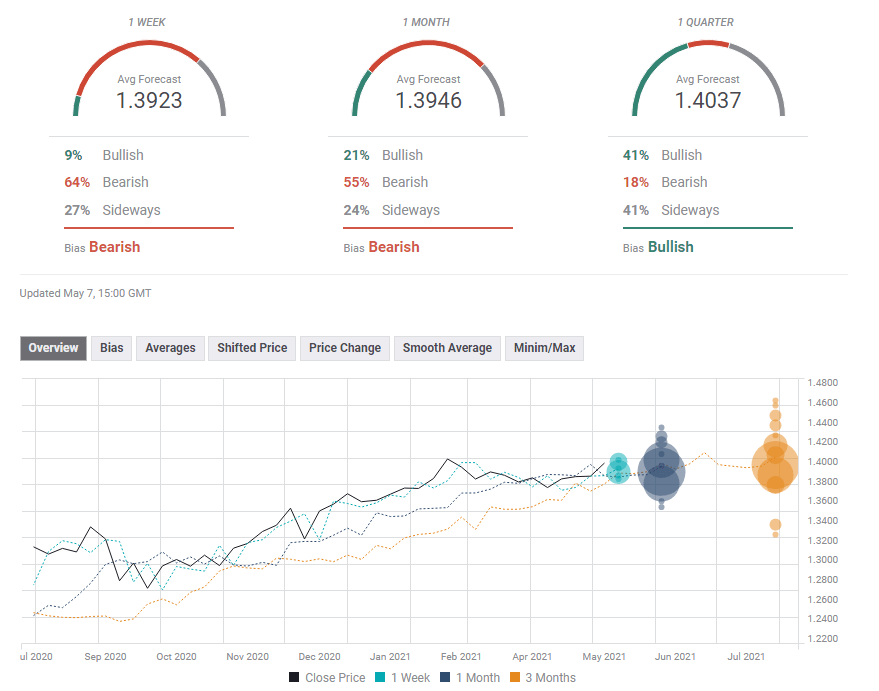