This was the week - Brutal Brexit summit, weaker USD

The GBP/USD had an optimistic start to the week. Markets remained calm on the US announcement of a 10% tariff on $200 billion worth of Chinese goods. The move was taken calmly by markets which liked the low tariff, the moderate Chinese response and the extended period of communication. The reaction was a "buy the rumor, sell the fact" and the greenback slipped across the board.

The headline inflation accelerating to 2.7% y/y in August and core inflation rising 2.1% y/y beating the market estimate of 1.8% increase.

Within the structure of the UK inflation, rising prices for a range of recreational and cultural goods and services, transport services and clothing made the largest upward contributions to the month-on-month change in the UK inflation in August.

When measuring the UK inflation over the year, transport continues to make the largest upward contribution, with prices rising by 6.0% y/y in August, the highest 12-month rate since April 2017. 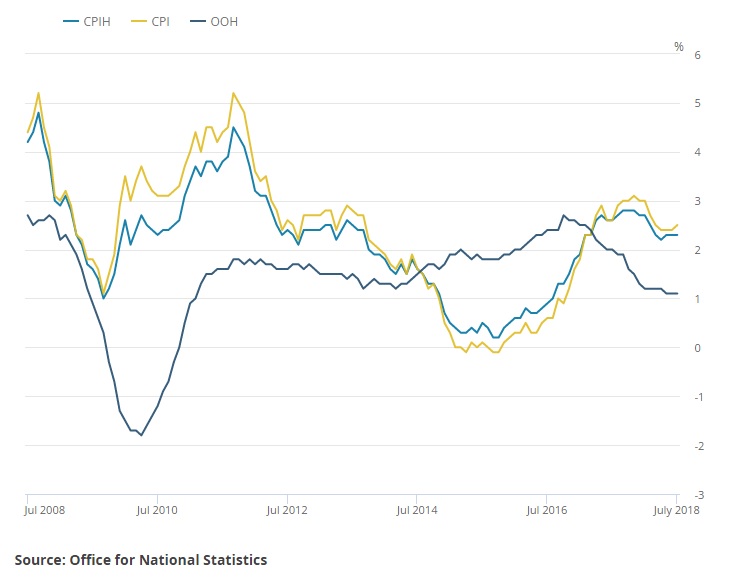 But then came the Salzburg Summit.

The European Union rejected the British Chequers proposal outright. Attempts to find common ground on the Irish border and customs union failed and the EU did not beat around the bush. Donald Tusk went forward with thick hints that the UK cannot eat the cake and leave it whole, nor cherry pick. The UK press exacerbated May's defeat by labeling it a humiliation.

May's response came on Friday. In a special televised address at No. 10, the PM said she always treated the EU with respect and expected the same. She then pledged never to tear her country apart, referring to a special arrangement for Northern Ireland, nor become a rule-taking nation.

Her words sent the pair tumbling down below 1.3100. The plunge erased previous gains. It is important to note that the Salzburg Summit and the reaction come ahead of the Conservative Party Conference in Birmingham that begins on September 30th. The PM may have adopted the tough stance in order to fend off her hard-Brexiteer opponents.

More: GBP/USD Forecast: Is May just posturing ahead of the Conservative Conference? If so, there's a buying opportunity

Brexit remains left, right and center. The Labour Party holds its annual conference in Liverpool and as the government has no majority in parliament, the position of the opposition matters quite a bit. If Labour were to adopt an outright soft-Brexit stance, such as supporting a Norway-style deal, it could strengthen the Pound.

Negotiations between the EU's Michel Barnier and the UK Brexit Secretary Dominic Raab and their teams also continue.

The final release of UK GDP for Q2 is also of interest. The third and final read is projected to confirm the 0.4% QoQ and 1.3% YoY growth rates. Surprises are not uncommon in this publication.

Speeches by several Bank of England officials are dotted throughout the week. The BOE is not expected to raise interest rates anytime soon despite rising inflation and upbeat economic figures. Like others, the Old Lady is waiting for clarity on Brexit.

Here are the UK events lined up on the economic calendar:

US events: The Fed and also some figures

The decision by the Federal Reserve is the primary event of the week, at least outside Brexit Britain. The FOMC is set to raise interest rates for the third time this year and will most likely continue signaling another hike in December. The dot-plot with interest rate, growth, inflation, and employment forecasts will be eyed.

It is unclear if the Fed will settle for neutral monetary policy, with rates in line with inflation, or take a step further and raise rates beyond inflation. Recent comments have suggested that the Fed will opt for the hawkish side. Apart from the dot-plot, the regular statement and Fed Chair Powell's conference will be closely watched. Anticipation for the decision will likely cause tension that will explode on Wednesday and the echoes will be heard later on as well.

The final release of US GDP is due on Thursday. The US economy grew by 4.2% annualized according to the previous release. More up-to-date data comes from the Durable Goods Orders report for August which is expected to show better figures than in July.

Friday sees the Fed's favorite inflation measure, the Core PCE Price Index, which likely dropped in August, following the lead of the Core CPI. Other consumption and income figures are also due on Friday.

While markets remained calm after the announcement of new duties, their implementation on September 24th and further comments by President Donald Trump may trigger new movements in markets. Trump's twitter feed is important to watch.

Here are the significant US events as they appear on the forex calendar:

The GBP/USD was trading in a narrow uptrend channel but fell out of it on Friday. It is still holding well above the 50-day Simple Moving Average which meets the 1.2970 resistance line, a level that capped the pair in early September. Momentum is still positive and the recent fall sent the Relative Strength Index away from overbought conditions.

Initial support is at 1.3045 which was the peak in late August. Cable got close to this level on September 21st. Under the 1.2970 level mentioned earlier, we see 1.2940 as a separator of ranges. The next noteworthy support line is at 1.2850, a level that cushioned the GBP/USD in late August.

We are unlikely to see any breakthrough in Brexit negotiations ahead of the Conservative Conference. In addition, the Fed will likely be hawkish. All in all, there is more room to the upside than to the downside.

The FXStreet forex poll of experts shows a bullish stance in the short and medium terms while a neutral one afterward. The median forecasts have not changed and are more stable than the erratic moves in Sterling.

EUR/USD trades above 1.18 ahead of US retail sales

EUR/USD is trading above 1.18, off the highs. The dollar advanced along with higher yields, the ongoing fiscal impasse, and upbeat jobless claims. The focus shifts to US retail sales for July.

Forex Today: Three reasons for the greenback comeback, all eyes on retail sales

The US dollar has been gaining ground once again as the bond-yield pendulum swings up again. Washington's fiscal impasse, a weak bond auction, upbeat jobless claims, and Sino-American relations will make way for retail sales figures for July.