The EUR/USD pair advanced for a second consecutive week, hit its highest since mid-June at 1.1802 as the American dollar suffered all through the week, but entered sell-off mode Thursday, as resurgent risk-appetite played against the greenback, as the escalation of the trade war with tit-for-tat tariffs, was not as feared. The common currency was quite reluctant to advance during the first half of the week, somehow indicating that demand for both currencies is limited and that the ongoing moves are a game of the "less-weak" rather than some clear strength from one or the other, as European data failed to impress, with EU inflation meeting previous estimates and market's forecasts.

This Friday, the preliminary Markit PMI for September showed that growth in the Union stagnated,  growing at the second-weakest rate since late-2016, according to the official report, as manufacturing growth was subdued by export orders stagnating for the first time in over five years. The Markit index came in at 53.3,  down from 54.6 in August, its lowest in two years, while the services index fell to a 3-month low of 54.7, all of which left the Composite PMI at 54.2, down from 54.5 and a 4-month low.

US data released through the week was mixed, but the most relevant one, the  preliminary Markit PMI for September, sort of disappointed, as opposing to solid growth in the manufacturing sector, which reached a 4-month high by printing 55.6, services activity fell to its lowest in 18-month, with the index printing 52.9, leaving the Composite PMI at 53.4 its lowest in almost a year-and-a-half.

Anyway, the greenback recovered some ground Friday, as risk aversion returned by the hand of a collapsing Pound on stalemate negotiations about the Irish border issue. The pair eased just modestly, a sign that demand for the greenback is solely due to its safe-haven status.

The upcoming week will bring a Fed's monetary policy meeting, with rates expected to be rising by 25 bps. The move has been largely priced in, and market's focus will be on hints about the likelihood of a December hike, which lately decreased just modestly. FOMC's Projections and Powell's speech will for sure have more effect than the hike and could bring back some dollar's love. The US will also release a revised version of Q2 GDP, and more relevant, PCE inflation, while the EU will unveil September preliminary CPI estimates.

As said, the pair holds above August high, so the downside seems limited at this point. Furthermore, the weekly chart shows that the pair closed above its 20 SMA for the first time since March, while technical indicators entered positive ground, also for the first time in 5 months, now maintaining upward slopes and favoring another leg higher.

In the daily chart, the 20 DMA and the 100 DMA converge around 1.1630, which used to be a strong resistance, although the shortest one has lost its upward strength. Technical indicators in the mentioned chart eased from near overbought levels, holding well into positive territory, rather reflecting the latest slide than supporting a downward extension ahead. 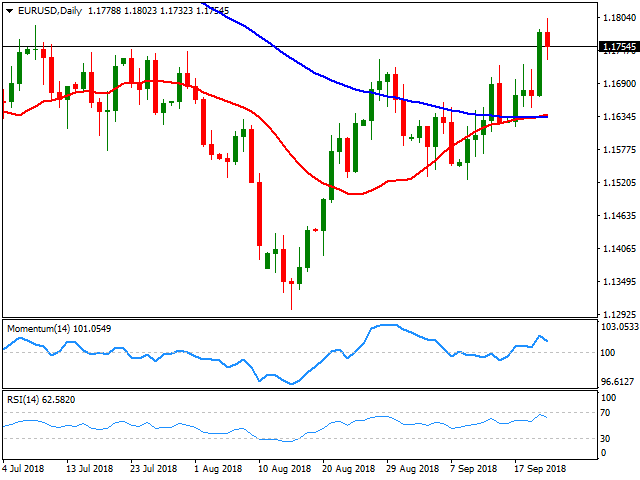 Sentiment toward the USD, according to the FXStreet Forecast Poll remains negative short-term, as the EUR/USD pair is seen bullish this upcoming week. Bears, however, dominate the longer-term perspectives, up to 60% in a 1-month view from 40% the previous one, now targeting 1.1684 from the previous 1.1655. In the 3-month view, bears are now 46% while bulls just 17%, down from 34%, although the most increase is seen in those expecting the range to continue. The pair is seen targeting 1.1609 on average in this last time frame.

The Overview chart offers quite a mixed picture, with the moving average bullish in the weekly outlook, down in the monthly and flat in the quarterly one. However, in this last time frame, the largest accumulation of targets is around 1.1800, a sign that the blind positive sentiment toward the USD has started to ease.