It's amazing the ability of market's participant to come up with new terms to describe situations that can rock the boat in the financial world. After the Grexit, the Brexit and much more, we have now the "hawkish hold" used to describe the upcoming FED's economic policy announcement. Pretty much, the term is telling us that the market has no clue on what the US Central Bank will do this time.

Yellen's strong wording over the US economic conditions in her opening remarks at Jackson Hole, fueled hopes of a rate hike as soon as this September, later supported by the hawkish rhetoric of several policy makers. During the past week, however, Lael Brainard poured some cold water over the hike case, by asking for "prudence in the removal of policy accommodation."  She reminded speculators that FOMC´s officers are quite split in regards to the appropriate timing for the next rate hike.

Read: FXSurvey: Dovish Fed to hike interest rates in December, QE might return in the mid-term

The market bent back towards the greenback on Friday, following the release of US inflation data. According to official figures, the US CPI increased by 0.2% in August on a seasonally adjusted basis, and by 1.1% before seasonal adjustment over the last 12 months. The Core PCE index stands at 1.6%, while the unemployment rate at 4.9%, which means that if they want, the FED could raise rates this Wednesday. The problem is that none believe they would.

Hopes are now on a December hike, as chances of a rate hike after the elections are these days of over 50%. Still, markets are waiting for a hawkish stance from the FED to confirm it, and can rush back into de greenback with it, in spite of no action being taken. 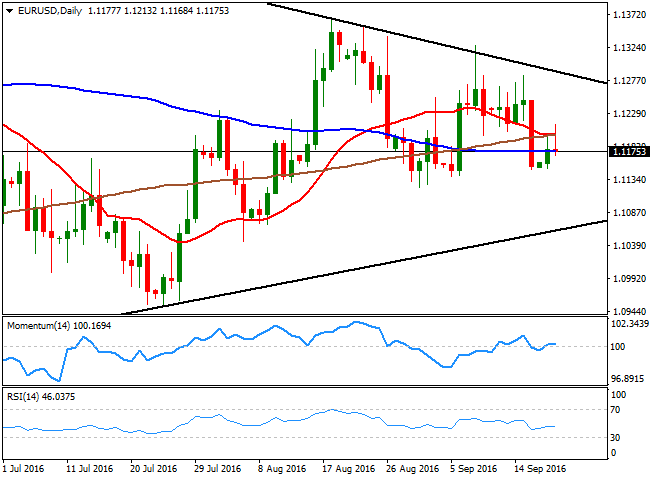 From a technical point of view, and according to the daily chart, the pair maintains a neutral stance, with the downside slightly favored as the price seems unable to advance beyond its moving averages. As commented on a previous update, a huge trigger is needed to take the pair out of the 1.0840 and 1.1460 range, as with a couple of short-lived exceptions, the pair has been stuck between those two levels since the beginning of 2015. And the FED won't be enough, doesn't matter how hawkish it could be, unless they actually raise rates. That will be an "all hell breaks loose" scenario that will keep traders entertained for more than a couple of sessions.

The immediate resistance comes at 1.1200, followed by the 1.1280 region, where the pair has a daily descendant trend line coming from 1.1615, this year high that has rejected advances since early August. Beyond this last, 1.1365, August monthly high is the next resistance, followed by a major static level around 1.1460.