The very much anticipated September Fed Meeting is here and, although it may come and go without a change in the US monetary policy, the event will likely give a more clear picture on the path the Fed might take in the mid-to-long term. Yellen & co have taken a prolonged pause on the interest rate hike cycle they started last December and the messages out of FOMC speakers have been diverging. Doves and hawks have been messing around about the convenience of an interest rate hike in September and the markets are looking for clarity.

In order to get a glance on how the market assesses the Fed monetary policy, we have asked our most notable contributors seven questions about the most defining macroeconomic topic. 31 of them have answered, with the following results:

When do you expect the Fed next interest rate hike? 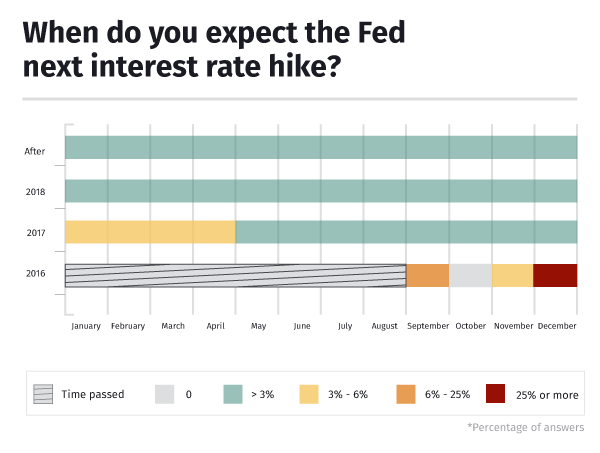 At this point, this doesn’t seem to be a dividing issue for the market. The broad consensus is that the Fed will wait until December, as it did last year, to pull the trigger on the first interest rate hike of 2016. 23 of the 31 experts questioned point at the last meeting of the year as the one where the rates will rise to 0.75%. Even if some of them mention “face-saving reasons” or cover themselves with a “providing there’s no intervening event” quote, there doesn’t seem to be many doubts about the timing.

Though not a very popular answer, we must mention that some of them contemplate “an outside chance” of a surprise hike in September.

Which will be the interest rate level where the Fed will stop hiking at? 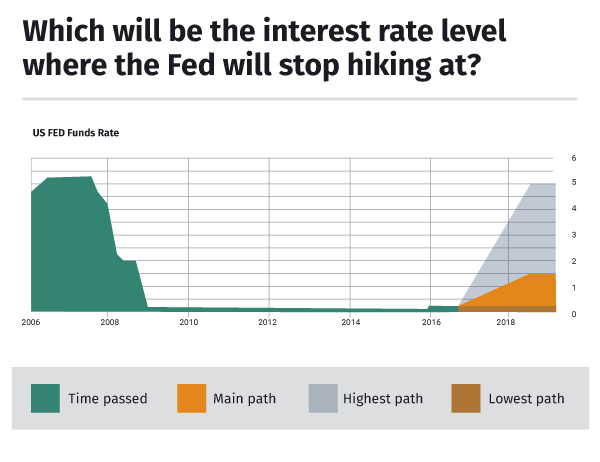 This second question delivered more interesting results. Our experts are really spread out on where the Fed’s hiking path might reach its peak. Their answers go from the no-more-rate-hikes-at-all flat level to the “let’s climb the Everest” 5% plateau. But even if this is a really wide range, most of the answers here were rather pessimistic on the ability of the Fed to lift the interest rate level.

Most popular answers were 0.75% (one more hike and we’re done) and 1% (“they will be lucky if they get there”). Well, the latter quote was mentioned on a 1.75% answer by Joseph Trevisani, but it still works for a lower level. This seems to be how most of the experts feel about the Fed hiking path: they want to get as high as possible to make room for some cuts when the next recession comes, but they will need some luck to even get it above 1%.

In fact, even the most optimistic answers (and there were some, with six experts pointing at 3% or higher plateau levels) tend to be accompanied by a long-term tint or a more classic preventive quote: “it will depend on the state of the US and global economy”. Oh well.

Do you expect an acceleration in the rate hike pace in the upcoming months? 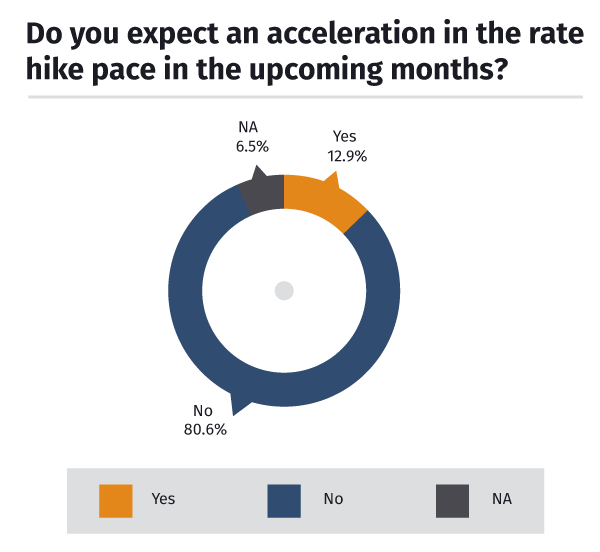 No. Nope. Nein. This was the most conclusive answer we got in the whole survey: the Fed will not be able to accelerate their rate hike pace. If they want to get high, they will need to do so patiently. Even two of the “Yes” answers specifically referred to the acceleration as “one rate hike this year, two next year”. Well, that’s technically accelerating, as going from stuck-in-traffic-jam to cruising-at-30-mph-on-a-congested-motorway also is, but nobody will ever get a speeding ticket about that.

Several negative answers included an “unless inflation accelerates” clause, but they also mentioned they had a hard time foreseeing such a scenario. Which takes us to our next question. 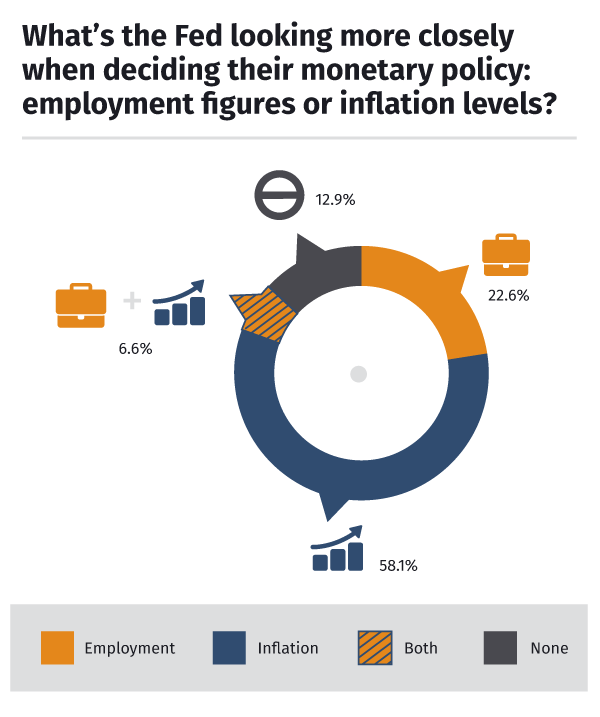 Yup, inflation looks like the major macroeconomic topic to follow for the Fed and, therefore, for the markets. Here we got more elaborate, creative and unexpected answers from our contributors, but the most popular one still was: “they are mainly looking at inflation to pick up, if it was about employment data, nearly at full capacity, they would’ve already hiked”.

And while that’s a very reasonable answer, with the unemployment rate hanging below the 5% target, there are still some experts looking at other indicators. Eddie Tofpik refers to the dual mandate of the Fed and points specifically at wage inflation and Barbara Rockefeller looks at a bunch of other data as GDP, balance of payments, Brexit fallout or China.

Then there are some that don’t believe the Fed is looking at any indicator. David Morrison believes “they just care about keeping the S&P500 bid” and Dave Floyd goes further with a “Fed is clueless, they’re a bunch of academics tinkering with global markets” line.

Can the Fed sustain a tightening cycle when all the other major central banks are on an easing one? 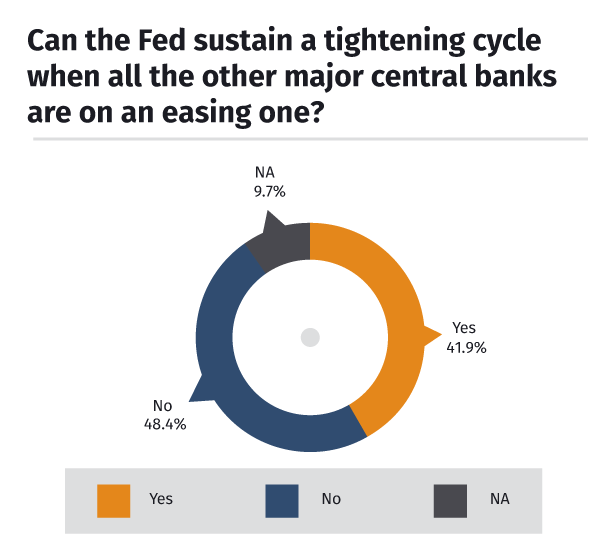 Our expert field is quite divided here. Being rather dovish on the Fed rate hike prospects, and seeing lack of inflation as the main issue preventing such a path would make us think that most of our experts wouldn’t believe in the power of Yellen & co to counter the policies of all other major central banks, currently on easing cycles.

Negative answers still take a small lead on answers mostly consisting of arguments like this one dropped by Chris Murphy: “Fed is too concerned with the dollar strengthening on rising yields”. That would potentially damage US export sector, which is another reason several experts mention as a key one that might prevent a tightening cycle. John Benjamin adds the example of the RBNZ failing to sustain it as “not giving hope” to the Fed case.

On the other side, we received several answers signaling a tightening of the monetary policy as something in the realm of possibility for the Fed. Besides those admitting it might be “the most dovish series of hikes in history”, there are some hawks out there. Giuseppe Basile says “it would be painful but is the right way to go”, also stating that “the current negative rates trend will eventually reverse”. Stuart Cowell adds to this point asking interesting questions: “Can the BoJ and the ECB get rates more negative? Is NIRP working?”. We might get an answer to this on this week’s BoJ meeting.

Do you think inflation can be a problem in the long-term if the Fed doesn’t “normalize” its policy soon? 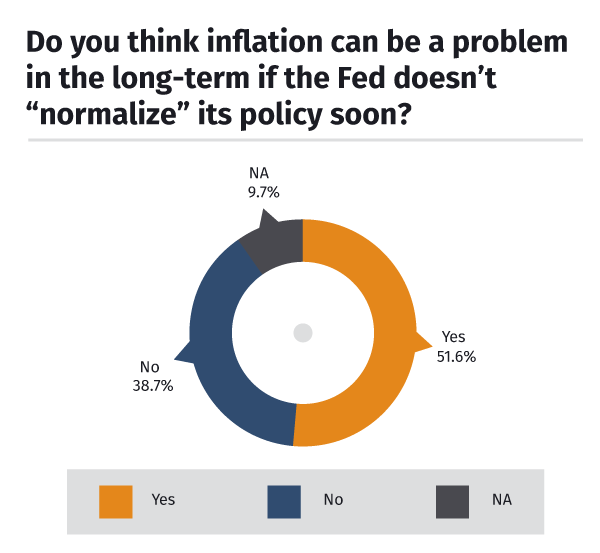 Another bunch of interesting answers here, as a majority of our expert pool foresees inflation as a long-term problem even if most of them stated prior that lack of it is what prevents the Fed from hiking rates. This paints the picture: a policy consisting of massive QE and low rates for so long has not achieved the 2% target in CPI, PCE or other standard inflation measures, but lots of market experts still are fearing an eventual spike in prices.

That said, there are several contributors that see inflation already as an issue nowadays. It may not show in the standard indicators, but as Chuck Butler says, “inflation is already a problem in food, housing, healthcare or tuitions”. LikesMoney points another interesting trend: “commodities have left behind a multi-year low, so now the genie is out of the bottle”. Steven Knight blames QE: “given the huge easing, it was always going to be a problem. The question is when”. A good one for another survey.

On the inflation-not-a-problem-even-in-the-long-term camp, there is an interesting reasoning by Nenad Kerkez mentioning that “demographics don't point that way as baby-boomers are retiring”. Carley Garner thinks “deflation is a bigger concern” and Greg Gibbs goes further by saying that “inflation above target would be a good thing”. Richard Perry points at “lack of demand, slack in the economy and bonds not pricing any threat of inflation” to forget it as a potential problem.

All things considered, this were quite divisive answers.

Is a return of QE policy something to consider in the mid-to-long term? 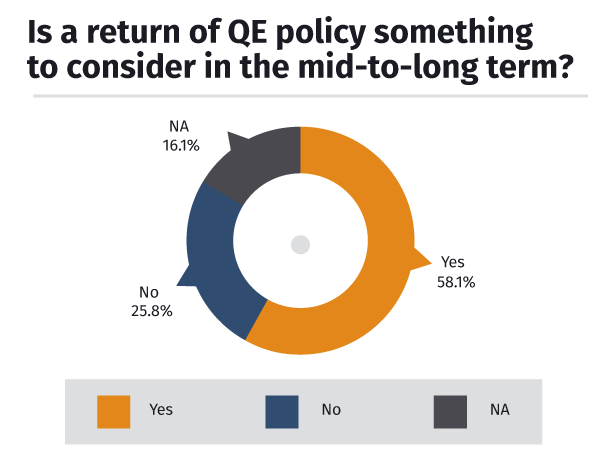 Some people got confused by this question after several ones asking about tightening policy scenarios. This may be the reason why the amount of non-conclusive answers was more significant here. We got several answers putting conditional clauses: “it will depend on where interest rates are when more easing is needed”/”US Election and global growth will determine this”/”they shouldn’t but can’t be ruled out, China is a real unknown”. David Morrison just answered this with “I hope not”.

QE is not a very popular policy among market experts. Most of the negative answers we got in the survey included bad regards to the easing programs. According to Giuseppe Basile, “QE hasn’t shown tangible results and undermines the health of the system”, while Dean Malone simply assessed that “QE is not the solution in the long run”.

All in all, most of the answers were positive about a hypothetical return to the easing program, which shouldn’t be that surprising considering the pessimism shown in other questions. The most common argument made was the “no arrows in their quiver when next recession comes”.

If rates don’t get way higher, QE might be the only arrow left to stimulate the economy through monetary policy.

Ashraf Laidi interestingly points that the Fed will execute a new QE program “through the purchase of corporate bonds”, something the Fed never did in the past but the ECB is currently doing. Carley Garner concluded with a bold statement: “QE is here to stay, Central Banks will be tempted to use it to avoid further slumps”.