To taper or not to taper? That is the question for markets ahead of the Federal Reserve's all-important June meeting. The world's most powerful central bank buys $120 billion worth of bonds every month and investors are coalescing around a path to reducing these purchases as America's economic situation improves. The short answer is no.

Rejecting a change in policy will likely push the dollar down – but forex is never a one-way street and the bank's decision is comprised of several parts that may cause jitters. These can turn into trade opportunities.

The upside for the dollar

On Wednesday, at 18:00 GMT, the Fed announces its decision and also publishes its quarterly forecasts for growth, inflation, employment and interest rates. Back in March, only a handful of members saw interest rates rising in 2022, while the majority penciled one only for 2024. Bond markets point to the spring of 2023 as the lift-off date.

The latest interest rate dot-plot from March, when 11 out of 17 members saw rates staying unchanged through 2023:

America is returning to normal and growing at a rapid pace. An upgrade to the Gross Domestic Product outlook may lead some additional members to back an early rate hike.

Fast economic growth, beyond the pandemic tumble and recovery: 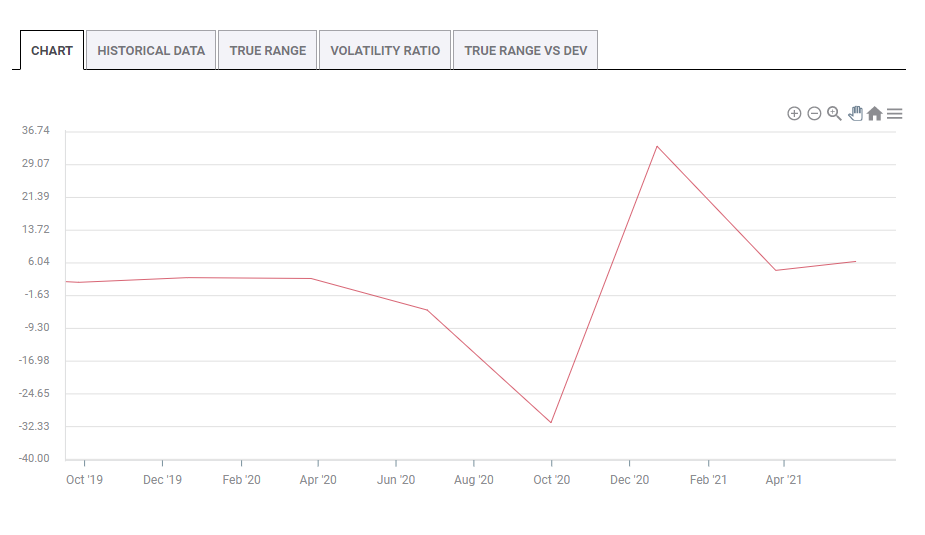 So far, only Dallas Fed President Robert Kaplan has called for an early increase in borrowing costs and also a discussion on tapering.

Other members have either towed the central, dovish line that says that accommodative policy is necessary and others have remained silent. Perhaps the only standout is Randal Quarles, who said that it is time to "think about thinking of tapering" – paraphrasing Federal Reserve Chair Jerome Powell when the latter refrained from even remotely considering a hike.

Will Quarles and others move their forecasts forward? Any increase in the camp supporting an early rate hike could trigger a knee-jerk reaction In favor of the dollar.

Another potential boost for the currency could come if one of the members dissents against the decision. However, a dissent seems off the cards, especially as Kaplan is not a voting member.

Inflation is rearing its ugly head – that has been the narrative in financial markets in recent weeks. The global chip shortage, evidence of stress on supply chains, and the data all support this notion. As price stability is one of the Fed's mandates, the bullish case comes from charts like these:

Not only has headline CPI hit 5% – the highest since 2008 – but underlying inflation is also on the rise. An upgrade in the bank's expectations for future price rises within the new forecasts could also support that notion.

However, Powell may then send the greenback tumbling down, and for various reasons. First, the Fed Chair oversaw a policy change in which the bank prioritizes full employment at the expense of rising prices.

According to estimates, some 7.6 million Americans have yet to return to their pre-pandemic jobs. Even if a couple of millions have retired, there is still a long way to go. 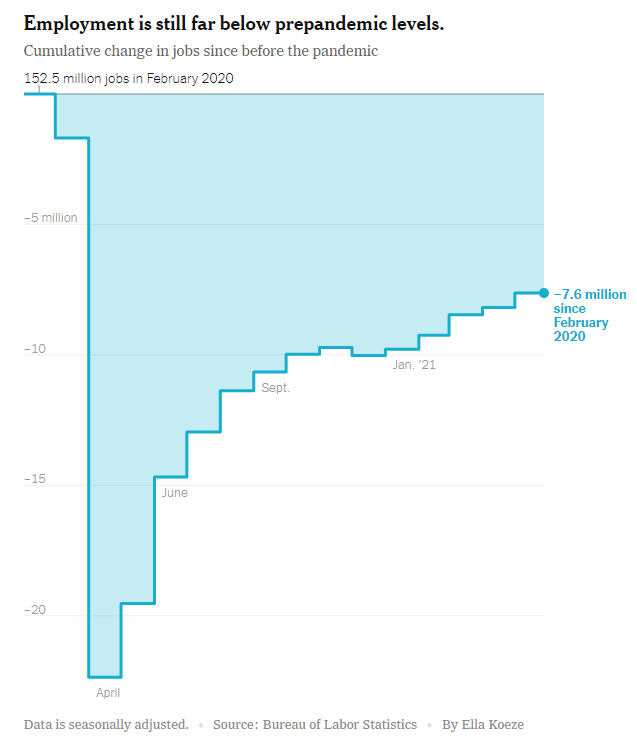 Circling back to inflation, Powell and most of his colleagues have been sticking to the script that the recent bump is only transitory. As the chart above shows, the pandemic first sent prices down and the year-over-year comparisons triggered a bounce. Economists have been aware of these "base-effect."

The bump up in inflation is not only a source of comparisons but also of price pressures related to the rapid reopening – and the Fed will likely see through that as well. Robust monthly rises in costs were driven by airfares, prices of used cars and apparel – all things that were in low demand while Americans were hunkering down, and are now leaped upon.

Apart from playing down inflation and sticking to the "transitory" script, reporters are set to ask Powell about tapering bond-buys. If he flat out rejects that with something along the lines of "it is premature to have a discussion about tapering," the greenback could suffer.

Moreover, if Powell dodges questions about the proper time for such a debate – investors eye late August's Jackson Hole Symposium – it could suffer another blow. How far could the greenback fall? It will probably just undo the gains recorded in the initial reaction.

This first up, then down playbook for the dollar is the baseline scenario. More dovish outcomes could include a downgrade of employment expectations, a move that could weigh on the greenback from the outset, especially if accompanied with little movement in interest rate forecasts.

Another, less likely, the dollar-adverse scenario is one in which Powell vows more action if the government does not additional stimulus.

The most hawkish outcome would be if Powell says that the Fed is set to discuss tapering soon or the extremely bullish scenario in which he says the bank has had its first such debate now. In this case, which is among the least likely, the greenback could extend its gains.

The Federal Reserve is set to release updated forecasts, which are set to trigger the initial market reaction, potentially one that is dollar positive. Fed Chair Powell could dampen such gains with caution, especially if rejects any early withdrawal of stimulus.

More US Inflation Analysis: As high as it gets? Fed may still stick to "transitory" stance, dollar could suffer

Dogecoin price rebound remains unvalidated as the cryptocurrency fails to register one close above the midline of an ascending parallel channel since the July 21 breakout. Without greater conviction, DOGE is not positioned for notably higher prices.

FOMC : The statement giveth and Powell taketh away

For a moment after the FOMC statement it seemed that clarity of the hazy central bank variety had surfaced at the Federal Reserve. This sentence was added to the policy announcement, " Since then, the economy has ...