That comment by Mr. Powell is as close to a promise as possible that the US central bank will announce the unwinding of its $120 billion bond buying program at its Wednesday meeting. The bond buying  began last March in the early days of the Covid-19 panic to provide emergency support for the paralyzed US economy.

For nearly two years the Federal Reserve had put the US labor market at the center of its recovery plans but over the last six months inflation has become its most pressing concern.

When the Fed moved to an inflation-averaging model for measuring price changes last September it was to eliminate policy pressure from what officials confidently expected would be a temporary burst of sharply higher consumer costs.

That has not turned out to be the case.

Two related developments have altered the Fed’s mind about its emergency and extreme monetary policy: surging inflation and the continuing labor shortages that are hampering a full recovery.

When the Fed dropped its first hint that a change in policy was becoming possible, in the minutes of the April Federal Open Market Committee (FOMC) meeting released on May 19, inflation was still considered a transitory phenomenon, keyed to the base effect of the price collapse a year earlier. Economic facts have proved otherwise.

The Personal Consumption Price Index PCE), the Fed’s preferred inflation gauge, and its core version reached 30-year highs of 4.4% and 3.6% in September. The indexes have respectively more than tripled and doubled in nine months.

The Producer Price Index (PPI) registered 8.6% in October, also a record for this measure, indicating many months of continued consumer price increases ahead.

Fed officials, including Chair Jerome Powell have recently acknowledged the altered outlook for inflation. It is clear that the Fed’s initial confidence in the base effect was misplaced. Price pressures are stronger and more durable than they had anticipated.

In the September Projection Materials headline PCE inflation for this year jumped to 4.2% from 3.4% and Core PCE was revised to 3.7% from 3.0%. 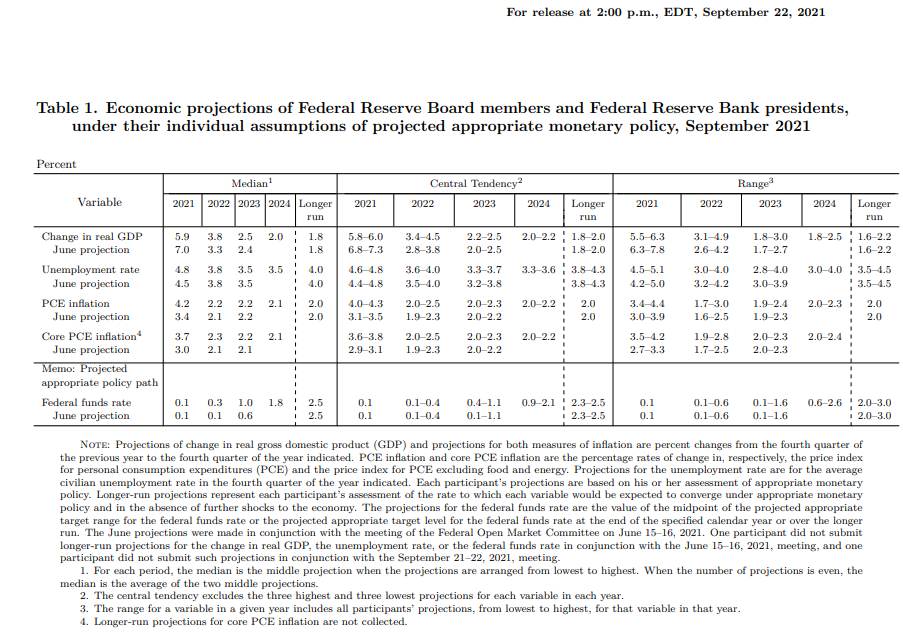 Inflation has become a long-term problem much faster than anyone anticipated.

A second problem which is both cause and effect, is the continuing and perhaps worsening labor shortage.

In June and July, when NFP hiring averaged over one million positions a month, the labor market finally appeared to be on its way to a quick and complete reconstitution. At that pace a full recovery by year end seemed possible.

In the last two months job creation has collapsed. August and September had a total of 560,000 hires, barely one-quarter of the 2.09 million in June and July.

Employee hesitation to return to work is especially puzzling considering  the number of jobs on offer. In July there were a record 11.1 million open positions and in August 10.4 million, in the Job Openings and Labor Turnover Survey (JOLTS).

The labor shortage is abetting inflation in two ways. Employers are forced to pay higher wages and bonuses to secure new workers. Existing employees demand more compensation as their buying power is eroded by rising prices. With employers everywhere desperate for workers, it is a powerful argument.

Product scarcity and manufacturing restrictions from worker, component and raw materials shortages, in the face of strong consumer demand, have given manufacturers and retailers the perfect conditions for raising prices.

The taper and interest rates

Despite Fed Chair Powell’s repeated insistence that reducing the bond program is not a rate hike, the difference is semantic. Markets have not been fooled.

Treasury rates have been on an upswing since the September 22 Fed meeting.

The yield on the  benchmark 10-year Treasury note has gained 22 basis points from the FOMC. It is still 20 points below the March 31 high of 1.746% because credit markets are wary, having been burned once this year already and traders want to hear from Chair Powell first.

The historical range for the 10-year yield between 2% and 3% leaves a great deal of room for increase.

Nevertheless, the direction of US interest rates is higher. The Fed will try to modify the pace, but it cannot prevent the rise.

Markets have also moved up their estimate of the first fed funds increase. The projection in the September materials had the initial increase in 2022 for the first time since the bond program began.

Fed funds futures as listed by the CBOE have the first 0.25% rate hike even earlier, at the June 15 meeting. 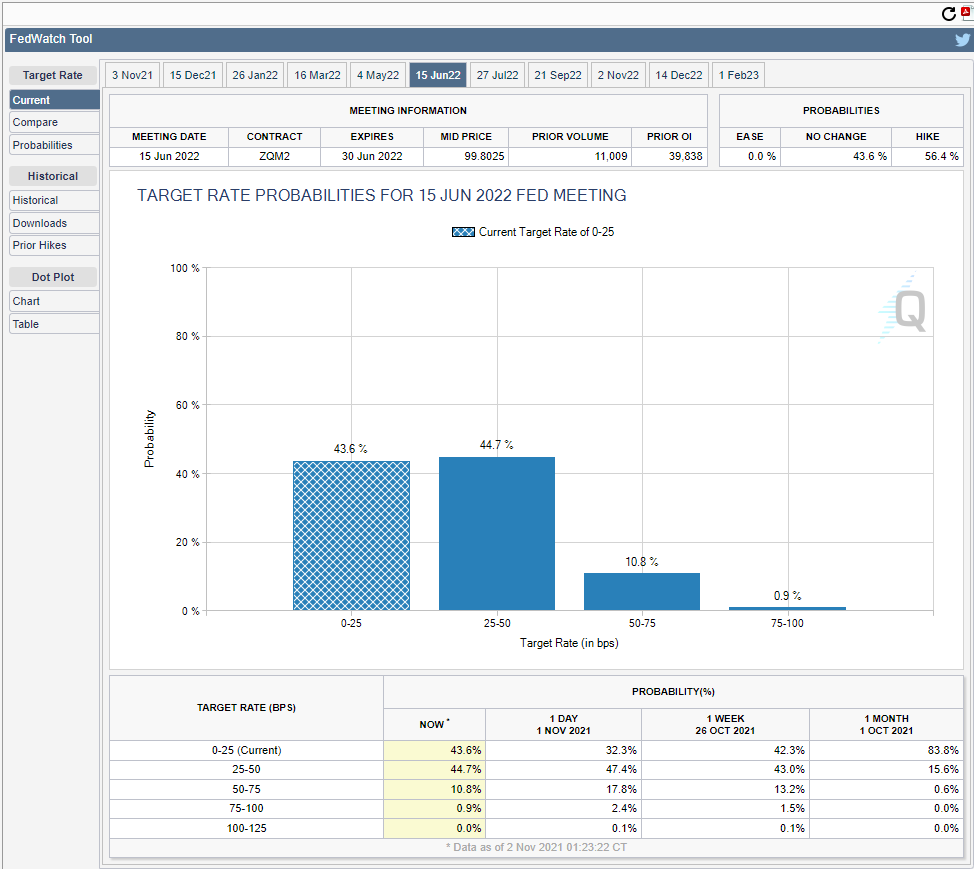 Though the fact of the taper seems to be foregone, the Fed still has a good deal of control of the process and its effect on markets.

While markets expect a $15 billion reduction, the Fed is free to enact more or less. Impact is linear, the more the Fed cuts, the higher Treasury rates and the dollar are likely to run.

Equities are a separate case which depends on economic growth. Initial signs from corporate profits to rising equity averages are positive.

The schedule is also undetermined. Markets anticipate a monthly reduction that ends the bond buying program by next June. The Fed, however, can offer anything from an ad hoc schedule contingent on economic developments to a extended version that keeps a diminishing bond program intact through the end of the year or even beyond. This effect is straightforward, the faster the reduction the better for interest rates and the dollar.

Mr. Powell will be expected to fill in the details on the taper. He will, without a doubt be extremly careful in his choice of words but the more he cites concerns about inflation, the faster and higher the rate assumptions will turn.

Another reason for the Fed to act now is the declining economic growth.

Gross Domestic Product (GDP) expanded at a 6.5% annualized rate in the first half. That is more than sufficient to bear the higher interest rates from a bond taper.

If the third quarter slowdown to 2% continues, the Fed could soon be unable to initiate a taper. How would the FOMC justify reducing economic support if, in Janaury, the economy has had six months of 2% or weaker growth? It is better to start the taper and then adjust the amount and pace accordingly, than to delay the start for an undetermined time until a stumbling economy improves.

The Fed has been preparing for this policy evolution for more than half a year. The FOMC is not going to miss this window, even if the economic future is more than a little uncertain.

Today we get housing starts and permits, but expectations are running low because of Omicron and bad weather. It’s not exactly an inspiring bit of data, anyway. In fact, the juicy data is from Canada, CPI today and retail sales on Friday. There is still chatter about a BoC hike next week. Remember the BoE can still surprise this week (Thursday), putting both of them ahead of the Fed.