The US dollar has been extending its upward march as vaccine euphoria replaces its driver. Can this continue?  What will the Federal Reserve do? Valeria Bednarik, Joseph Trevisani, and Yohay Elam discuss recent developments, analyze several technical currency charts, and look toward the next moves in forex.

Yohay Elam: King Dollar has been getting more comfortable on his throne, shrugging off disappointing Nonfarm Payrolls figures. Some pointed to upward revisions in the NFP, but the reasons are probably beyond one month's labor figures.

Valeria Bednarik: Umm not sure if the dollar is able to recover its crown. So far, the latest advance seems corrective for me. The market just needed an excuse to take some profits out of the table.

Joseph Trevisani:  We forget sometimes in following US statistics that the data from the Eurozone is no better...and the historical ability of the US economy to grow is considerably better.

Valeria Bednarik: Well, data is no better anywhere, but we all hope that would change in the next semester. And about the ability of the US to grow better... you still think so? As the pandemic develops and the US refuses to take measures, I'm more concerned about that.

Joseph Trevisani:  The situation may be different on the surface but once rid of the pandemic I think it would still be true.  My concern is now politics.

Valeria Bednarik: According to the WHO, we are not going to get rid of the pandemic anytime soon...

Joseph Trevisani:  Yes but the WHO has not been much of a prognosticator.

Joseph Trevisani:  And they are far too close to China to be reliable.

Yohay Elam: I think that the key question for short term growth is vaccination. The UK is leading the Western world, the US is second, and Europe way behind. Markets are looking beyond American and British covid pain and to both countries' vaccination speed.

Joseph Trevisani:  Yes. I saw one comment yesterday that points out that Israel, which has the highest vaccination rate in the world, 20%, also has a surge in cases.

Valeria Bednarik: It's about hopes, rather than current contagions or vaccination speed.

Yohay Elam: As in Israeli whose parents have already received the second dose, I'm closely following the situation. From Wednesday, everybody above 50 will be able to get an appointment for vaccinations. The speed is amazing, but I think it will take a week or two to see a downtrend. The bigger test is when the current lockdown ends. If hospitals do not see a surge three weeks after lockdown, it would serve as an inspiration to the whole world. Still to be seen.

Joseph Trevisani:  So you can get a vaccine? Haha, just kidding. Yes, that is the scenario. It should work. It is a remarkable organizational success, but then Israel is known for doing the impossible. If we assume the Israeli program works, it will be an example, how will markets react?  Perhaps not immediately but shortly.  Are equities the model?

Yohay Elam: I'm still in my 40s and not a resident, but on the personal level, it's a matter of weeks and willpower to stay in isolation once again...

Valeria Bednarik: Good point there. Indeed it will be an example that will encourage hopes. Plus more fiscal stimulus, record highs in equities are pretty much granted.

Yohay Elam: Pfizer is using Israel as a test case for the world, and I think markets are looking there as well. Tory MPs have told Johnson that the UK should copy Israel.

Joseph Trevisani:  I don't think markets will need much actual evidence to race to conclusions.

Yohay Elam: Markets are looking for narratives to rise. I'm surprised there hasn't been a taper tantrum.

Valeria Bednarik: And that would mean the dollar won't be so happily rallying...

Yohay Elam: So far, the Fed has tolerated the rise to around 1.16% at the time of writing. Seeing it as a sign of economic strength and optimism about the future. An increase to 1.50% would probably push EUR/USD below 1.20.

Joseph Trevisani:  Yes, the Fed does not want a market shock, and the Treasury market is very capable of producing one.

Valeria Bednarik: Treasuries are recovering, but the way to 1.5% is long. We are seeing some noise these days, but not sure how long will this last. I think that the market is looking for a fresh motor.

Joseph Trevisani:  I agree the momentum for the pandemic trends is expired.

Joseph Trevisani:  No, Fed rate repression is not an effective tool for quick economic movement, the consumer is much more reliable.

Yohay Elam: If Biden offers more than $3 trillion, consumption could rise and push yields and the dollar higher.

Joseph Trevisani:  The Atlanta Fed's chief Raphael Bostic said that he thought there could be a rate hike in the second half of this year...not the consensus opinion at the moment.but interesting. Almost any action or development  aside form a vaccine failure point in one direction..higher dollar.. Almost.

Valeria Bednarik: Yet the market does not seem convinced. I do agree with you, but can't see it happening just yet.

Yohay Elam: The downside for the dollar would come from a taper tantrum. The Fed can tolerate higher yields as they reflect the growth and even inflation. But I think that if markets tumble, the Fed could see it as a worsening of "financial conditions".

Joseph Trevisani:  I agree markets are not convinced yet, well, equities are, but not the rest.  But I don't think it would take much in the way of evidence for credit and then currencies, in that order, to become convinced.  The desire is there, market as well as human, for an end to the pandemic. I don't think it will be the Roaring Twenties, but that is the model.

Yohay Elam: No Roaring Twenties means no bubble burst. There have been growing voices that stocks are bubbling.

Valeria Bednarik: Those voices are getting old... sure, at some point, stocks will have to give.

Joseph Trevisani:  But one mans bubble is another's market base.  If there is a strong recovery, equities will rise.

Joseph Trevisani:  During the ancient history of QE after the financial crisis, the issue was the same.  Stocks did not revert to some logical, pre-crisis economic level because there is no such thing, they kept on rising.  This doesn't mean there won't be a  sharp fall, there will, but I think it depends on psychology, and the relief rise I think will come first.  In this case, I think currencies are the follower. 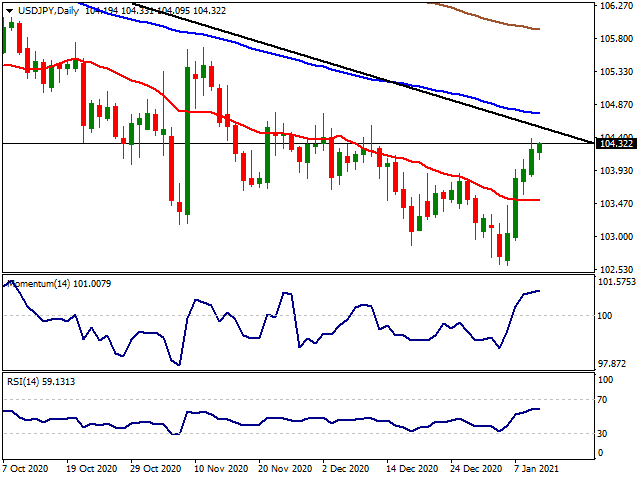 Joseph Trevisani:  It almost as if the dollar only loses during the interregnum between catastrophe and euphoria. Which is where we are now.

Valeria Bednarik: But USD/JPY is still below that long-term descendant trend line coming from March highs. The yen will lose its shine if it substantially moves beyond it.

Yohay Elam: The dollar needs emotions to run high. And the yen is technically appealing despite its slow moves. My conclusions from your points.

Joseph Trevisani:  None of the trends that go back to March have broken...blunted over the past few days, but their is all in the same dollar downdraft as yet.

Yohay Elam: What about the euro? Sluggish economies, raging virus and slow vaccine rollout, is it set to fall?.

Joseph Trevisani:  Even the USD/CAD which has a good reason for higher oil prices to keep the loonie rising, has moderated its decline..but as you say on the yen,  the USD/CAD is still well within the channel... 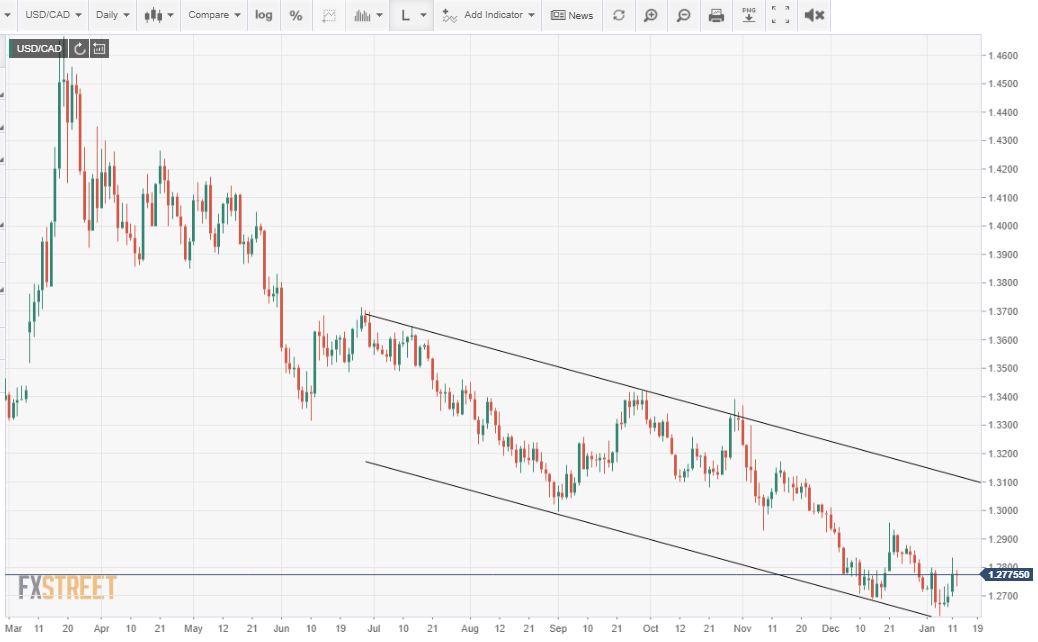 Valeria Bednarik: Doesn't seem so at this point. The EU may be behind the US, but ahead of other major economies.

Yohay Elam: I think Europe will eventually ramp its vaccine rollout, but that does not preclude another euro dive.

Joseph Trevisani:  We have US Retail Sales on Friday, I don't think that will do it for the dollar, it was a pretty grim Christmas in the US Christmas...

Yohay Elam: Indeed, and I think that speeches by Powell and Biden on Thursday will likely have a greater impact. Especially Powell, as the Fed remains the No. 1 mover in my opinion. To taper or not to taper? That is the question.

Joseph Trevisani:  I don't think the Fed will taper, it doesn't have to.

Yohay Elam: Central banks have a tendency to sit on their hands as much as they can especially when it comes to tightening.

Joseph Trevisani:  Treasury rates can rise if the Fed continues at its current pace of bond buying...a taper would accelerate the rise which the Fed does not want. I take Powell and the governors at their word that they want to see a full recovery before they relent on the rate brake.

Yohay Elam: Indeed. Will rising inflation push them to act sooner than later?. Inflation is that forgotten thing about prices rising.

Joseph Trevisani:  Recent history says no.  The globalization of manufacturing has been the greatest inflation killer in history.

Joseph Trevisani:  It might, but I don't think that is going to happen.

Yohay Elam: Perhaps prices could rise if there is a temporary supply issue. Due to the pandemic, but probably short-lived.

Joseph Trevisani:  Yes, but we have been there already. I think the currency markets are in a holding pattern until there is evidence that the hoped-for change in pandemic and economics, is on the way. For the euro important support is at 1.2100 and 1.1910 with a minor at 1.2000. 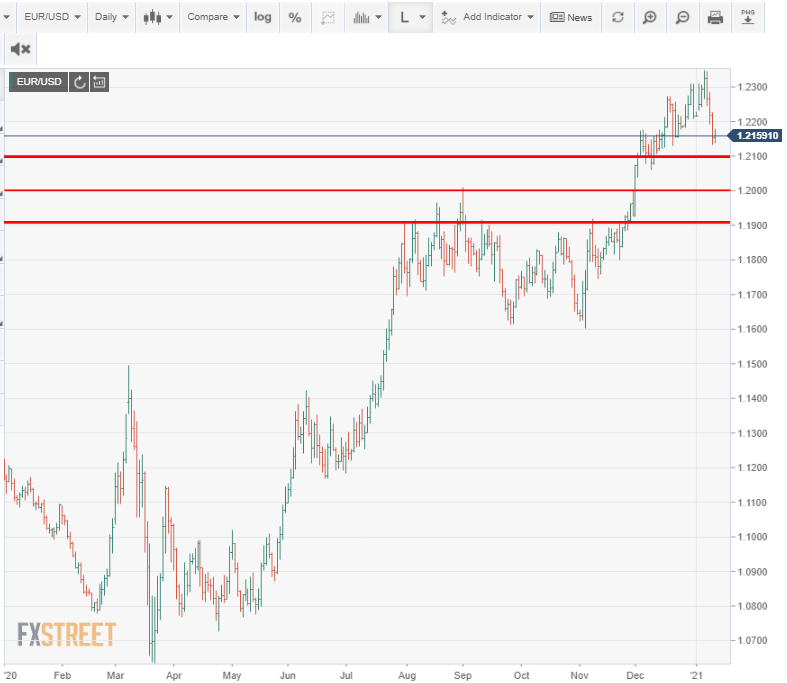 Yohay Elam: It has found its feet today, but it looks like a classic dead-cat bounce.

Joseph Trevisani:  Agreed. The stronger euro has no substantive arguments.