After the financial markets went into chaos in March, and desperately look to stabilize in April, investors began to recover their optimism throughout May and June, hoping for a soon-to-come economic comeback. The EUR/USD pair reflected the sentiment, plummeting in March to 1.0635 to recover early June to 1.1422. Since then, the pair has been unable to find a new way, stable around 1.1200 for three weeks in a row.

And indeed, the record economic contraction in the US and the EU has reverted in June, according to data released this week. The economies are not in pre-pandemic levels but are in the right path, and at a faster-than-expected rate.  And yet, currency pairs have remained unattractive one way of the other.

Even further, Wall Street enjoyed its best quarter in decades, with major indexes flirting with all-time highs. What’s up then? Well, COVID-19, that’s it. It seems that the virus-related crisis has been here forever, but it has been just six months since it emerged in China, and only three months since the world has taken notice of it, in the worst possible way.

The timing of improved macroeconomic data could not be worse, as it came alongside a record upsurge in contagions in the US, which overshadowed any sign of economic improvement with fears of another dip in activity coming up in the next weeks. The number of new coronavirus cases in the US is above 50K per day, and several stated have either delay reopenings or announced new lockdowns.

In the meantime, the EU is unable to agree on a recovery fund, while the US Federal Reserve kept pledging to stimulate the economy, the main reason behind stocks’ gains regardless of the sour mood.

Upbeat data, but for how long?

Indeed, data showed a V-shaped recovery in the Union, as manufacturing activity and services output extended their recovery in June, according to Markit. Business in the services sector remained below the 50 mark that separates expansion from contraction but is not far below the level. US official growth-related figures were also upbeat, as well as the Nonfarm Payroll report, which showed that the country recovered 4.8 million jobs in June.

The upcoming week will start with the US reporting the ISM Non-Manufacturing PMI, foreseen at 48.9 in June from 45.4 in the previous month.  Markit will publish the final version of the Services PMI for the same month, seen steady at 46.7. On Thursday, the country will publish the usual weekly unemployment claims data figures.

Germany will publish May Factory Orders, Industrial Production, and the Trade Balance for the same month, all seen improving from the previous readings but holding within worrisome levels. The EU will publish May’s Retail Sales, seen down in the month by 15%. Old data that has little chances of having an impact on the shared currency.

Instead, the market will remain focused on coronavirus developments, including progress in vaccines or treatments that can speed up the economic comeback.

The EUR/USD pair daily chart shows that throughout the week, the candles have small or non-existent bodies, a sign of uncertainty. The pair continues to trade below its 20 DMA, which gains downward strength around a Fibonacci resistance level at 1.1270. The Momentum indicator retreats from its midline while the RSI indicator is flat around 54, a neutral-to-bearish stance. However, and for a second consecutive week, the pair met buyers around the 38.2% retracement of its latest daily advance at 1.1170.

In the longer-term perspective and according to the weekly chart, the bullish potential receded further, but there are no signs of directional potential. The downside seems limited, as the pair continues to trade around its 100 SMA and well above a bullish 20 SMA. The 200 SMA, provides dynamic resistance in the 1.1330 area, where the pair met sellers since mid-June.

For the third consecutive week, the most relevant support is the mentioned 1.1170 Fibonacci level. With a break below it exposing 1.1095, the 50% retracement of the same rally.  To the upside, there’s a strong resistance level at 1.1270, while beyond this last, the pair can recover towards the 1.1340/60 price zone. June high at 1.1422 is an inflection point, with the pair set to remain in no man’s land as long as below it. 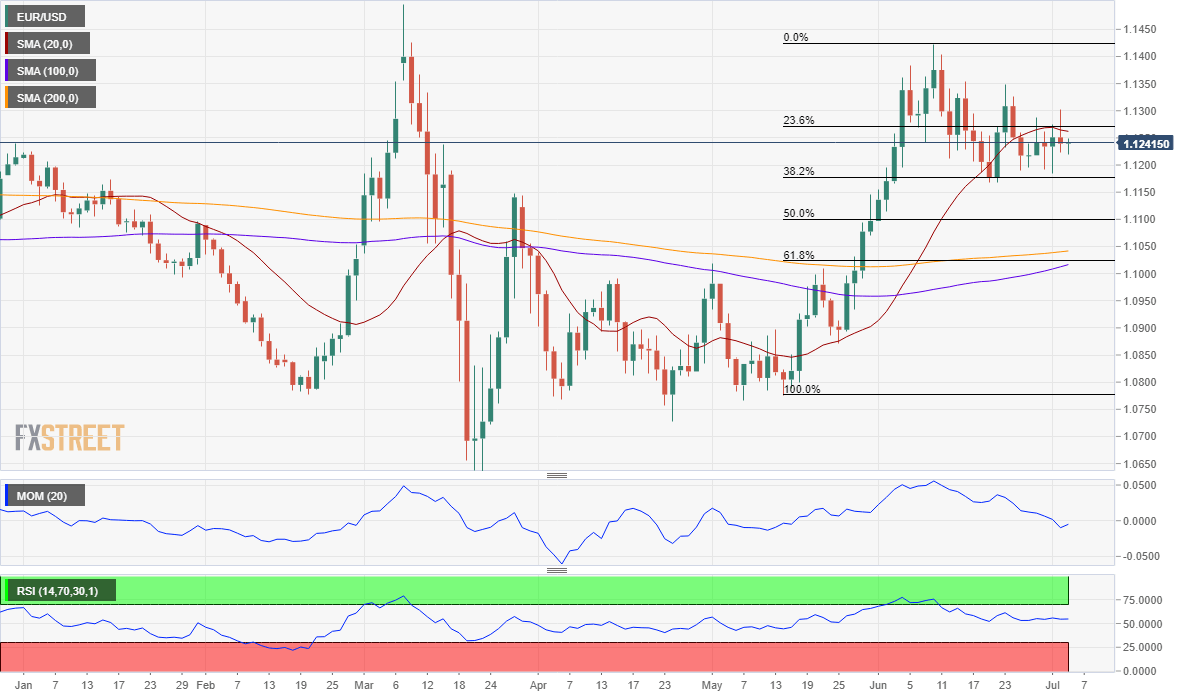 The FXStreet Forecast Poll shows that the pair may come under selling pressure next week, as only 29% of the polled experts expect and advance, while bears account for the 43%. On average, the pair is seen between 1.12 and 1.13 in the three time-frame under study. Bulls become a majority in the monthly view, and continue to lead in the quarterly perspective.

The Overview chart offers a more optimistic stance for EUR bulls, as the weekly moving average recovered a modest upward slope, while the larger ones offer a more substantial positive momentum. The pair seems poised to remain at the upper end of its latest range, instead of hinting a bullish breakout in the long term.

AUD/USD Forecast: Market´s anxiety having no effects on Aussie